Meet Ruchi Dhona, the Gurgaon girl who helped thousands of kids experience reading in a library

Having found her calling, sticking to a corporate job seemed impossible, thus Ruchi quit her job and put her mind entirely to the initiative

After five days of doing a 9-5 corporate job, 29-year-old Ruchi Dhona used to work on weekends at an NGO in Gurgaon trying to find her purpose in life. This was in 2015. One day she peeped through the window of a shut room at the NGO and her eyes hovered over numerous books covered in cobwebs and dust. Suddenly, her heart fluttered and cheeks went red with excitement. When she stumbled upon that dusty library full of books she finally her calling. From there to making her initiative Let's Open a Book spark a mini reading revolution took no time at all.

Using the meagre funds from the NGO, and her alma matter St Xavier's College, Kolkata, a librarian had been hired for two hours a day at Rs.2500 a month. Now the library is accessible every day of the week. To begin with, with jigsaw puzzles and a lot of sweet talk, she convinced the children playing outside the campus of the NGO to leave their outdoor games and spend some time with books. To her surprise, the children who initially said they will come only for some time were now sitting for more than hour looking at and reading books. Then there were two boys who pedalled 10 km on their bicycle every weekend, just to get books issued by Ruchi's library. This motivated and inspired Ruchi to do something more.

Of course, her tryst with reading began much earlier, "I can trace my interest in reading to my own early childhood experiences. Looking back, I know that early literary experiences have not only taught me how to read or comprehend but shaped my overall beliefs and value systems. The access to independent thinking, in terms of books and reading, has helped me in breaking social norms and charting my own course. And I want to empower every child to be able to do that," says Ruchi. 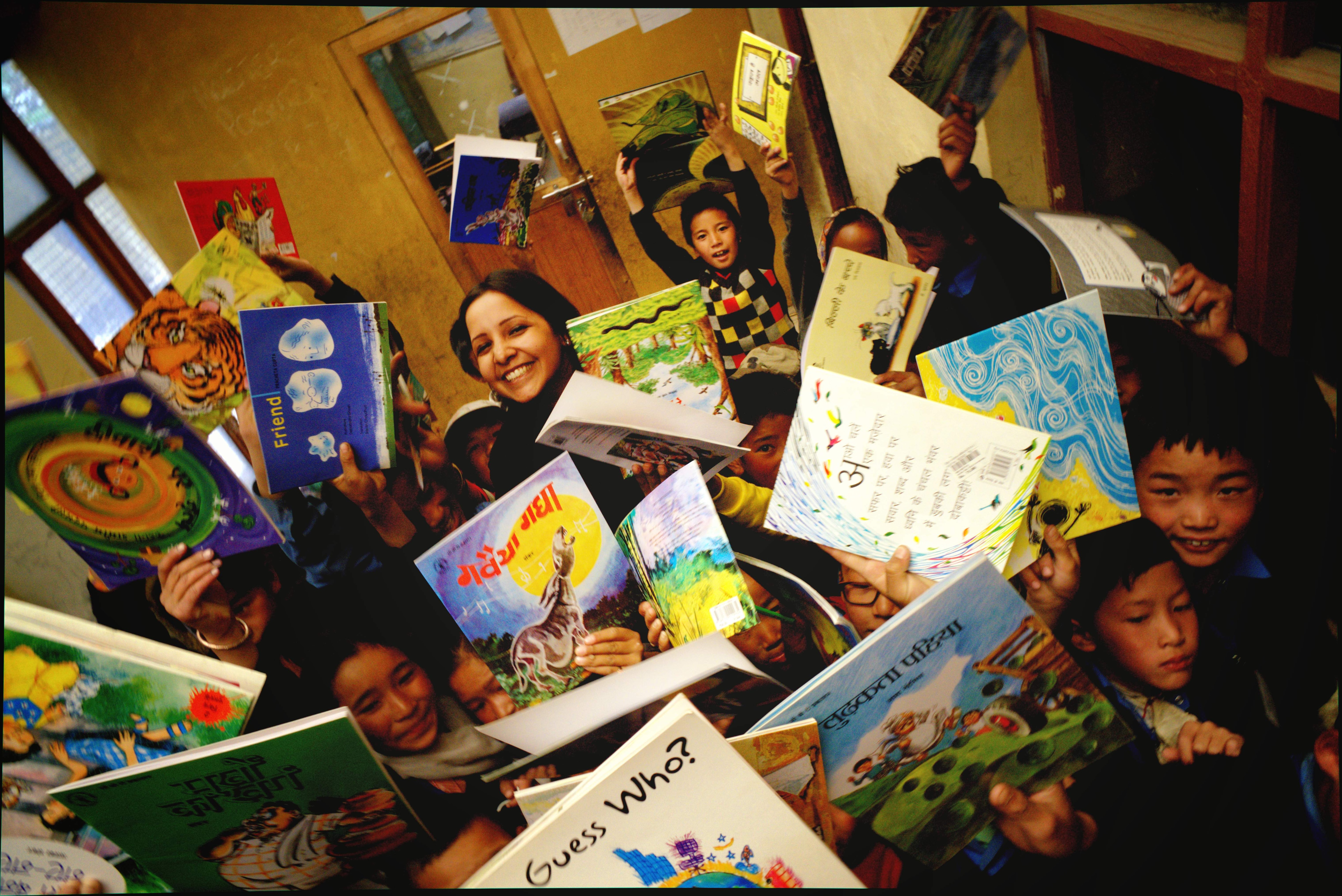 Looking back, Ruchi says that it was the enthusiasm of the kids that carried the initiative forward. Speaking about how she got the children to be interested in reading, she says "It didn't take off right away, but I realized if I spent enough time interacting with the kids, it's not impossible. I also use storytelling as a means of engagement." As Ruchi saw how things turned around so quickly in her favour, she wondered if there were other kids who would love to read books too. She found that there were 70 primary schools in the vicinity and she decided to start setting up libraries in as many schools as she could. The name Let’s Open a Book thus came as naturally as the initiative itself.

Consequently, Ruchi started addressing some other issues at hand. The first need was for age-appropriate books for first-generation school-goers. It was then, in 2016, that Ruchi applied for the Social Entrepreneurship Award run by Bain & Co (where she was working) and won it. With Rs 1 lakh in hand, a lot more was possible now. She deposited the sum with the NGO and set out to chalk a plan. She first picked out Hindi and bilingual books that were rooted in our culture, would rouse the curiosity of the kids, and were very relatable. A foldable kit with one hundred and fifty books was sent out to the eight Government schools in the area. The kids loved it.

Ruchi was relieved and assured them there were enough funds and books and thus left the NGO in charge, only to return after a few months and find they were back to where they began. The cobwebs had returned and children had forgotten the existence of a library. She then decided to take the initiative completely into her hands. Ruchi almost immediately found support from her seniors and colleagues who were inspired by the initiative. Thus, every weekend a team of volunteers started visiting the schools they had been providing kits to. 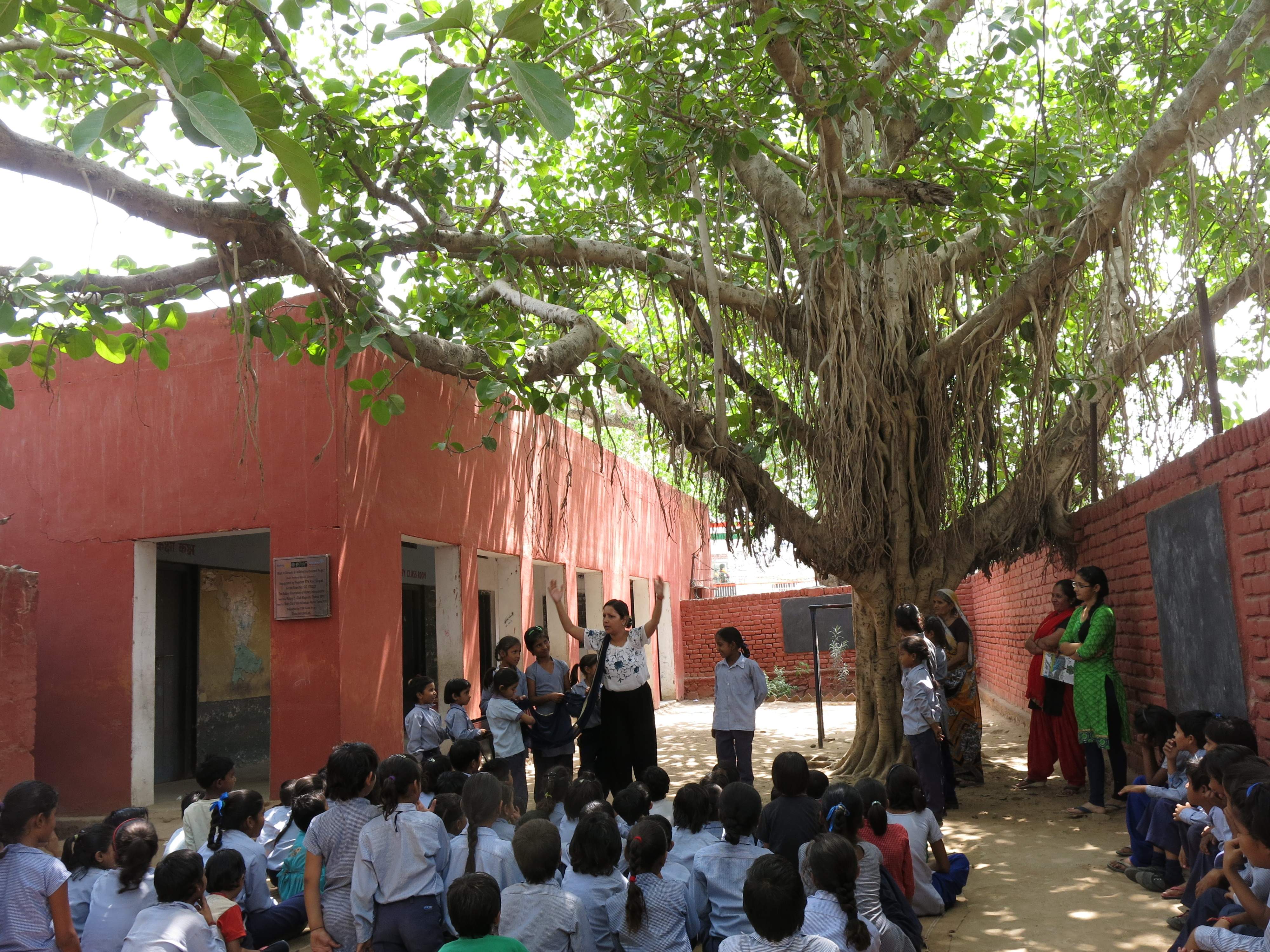 Storytelling is the key: Ruchi uses the technique to engage children

At first, the teachers at Government schools they visited rolled their eyes when they saw her. Until an unexpected development swung things in Ruchi's favour — when the Education Department declared Saturdays as ‘no bag’ days. Clueless so as to what activities to do if not teach from the text, the Government school teachers finally became open to Ruchi’s idea of reading sessions. And that is how every Saturday under the canopy of a peepal tree, Ruchi began reading out books and engaged kids in her storytelling sessions.

At these Government schools, Ruchi selected three children per school and hired a trainer, who over the course of six workshops trained them on how to manage the library. These children would spread out the kits two days a week, and a register which would function as a log book. Ruchi also put a system in place as per which when the selected children running the libraries graduated from primary to senior school, they would train their younger counterparts, so that the library continued to function, uninterrupted.

She also got a few teachers to help out in the initiative.

Ruchi's project has come a long way since then and there are numerous stories coming out of it. During one of her visits, she found out that one of the schools had 1000 books buried in a trunk, which were unlocked and are now being used. In another school, the hundred little girls attending that school have read over 3000 books over the last couple of years! In 2017 she won the social entrepreneurship award from Bain & Co. again.

After winning another lakh and the confidence of the Government school teachers, Ruchi is now working towards having a full-fledged library in each school. Painting the walls, changing light bulbs in the library room is already underway. Currently, Ruchi has direct access to 15 schools. Other than that she also supports a school in a tribal area of Udaipur. She added she was recently approached by a government school in Faridabad and another NGO in Nainital to help them set up libraries as well.

Do you wish to help in any way?
Those who wish to volunteer/donate can contact Ruchi at 8826259052 or email at teamloab@gmail.com. Follow their facebook page here.