This 25-year-old from UP found it hard to make his villagers believe in water conservation; today they are reviving their dying lakes together

Ramveer Tanwar grew up amidst lush farm lands only to realise that the lakes in his village were dying. The 25-year-old has been unstoppable in raising awareness around water conservation, since

With India’s water levels declining every other minute, it is the remotest regions of the country which have been facing the worst of this crisis. In the little village of Dadha in Uttar Pradesh (UP) however, 25-year old Ramveer Tanwar has become the icon of water conservation. Having revived several dying lakes in his own village and nine others nearby, Ramveer is the superhero UP was probably looking for - what with the state facing 13 consecutive droughts in the last 15 years and with farmer suicides on a staggering rise.


The ‘gaaon ka ladka'
Ramveer and I speak in mix of English and Hindi, trying to understand how the quintessential village-boy-meets-city turned his life around to do the work that he does. “I grew up in Dadha, a village little off Greater Noida, playing amidst the lakes and the wells of my place,” he reminisces. “We belong to the Gujjar community, so our main occupation as a family was that of farming - so yes, getting an education, along with helping my father at work came with its own challenges. I drove the cattle for their feed everyday, while attending the government school nearby,” he tells me. Gaaon ka ladka: Ramveer grew up amidst lakes and ponds, which had died over the years, due to severe lack of waste and resource management

In the final year of his B.tech at UP Technical University, Ramveer started noticing how the lakes he and his friends used to play in, had disappeared - mostly under a rubble of garbage. “Most of the garbage which is diverted towards the water bodies are domestic, not chemical,” Ramveer says. The situation rose from a lack of awareness, not an exploitative one. “I was taking tuitions for the kids in the village back then and even they felt that they had to do something about the dying water resources. When they tried talking to their parents, the adults refused to believe that there could be any such thing as ‘lack of water’,” he says. Ramveer also believes that his village was not ready for the arrival of electricity. “The bore well of 25ft was dried up in a year, making them dig further to 150 ft; they would let water overflow because they didn’t really imagine that water could actually one day disappear,” he explains. This was yet another example of how legal action would make no difference to the situation. “Unlike the mafia men or the construction contractors here, these villagers had no understanding of what they were doing - it was important that we picked a conversation.”

That is how Ramveer’s journey began in 2013 - of going from house to house and talking to families about the depleting water resources, garbage control and conserving water.


The ‘Jal Chaupals’ and double-filtration system

At the start of his journey in raising awareness, Ramveer decided to urge his students to get their parents to a common place every Sunday, to discuss water conservation. “The responses were positive and more people started arriving at the chaupals (common place). Soon we started getting calls from nearby villages as well,” Ramveer tells me. This led to the district magistrate recognising Ramveer’s initiative and officially commemorating it by naming it the ‘Jal Chaupal’.

The results of the Jal Chaupal programmes? Ramveer along with his team of students and village members started reviving dying or dead lakes in the villages nearby, by setting up a double filtration system. He explains this to me better - “The idea is to ensure that we clear garbage from the dying lakes in our villages and maintain the cleanliness by ensuring that no garbage finds its way to the water bodies again. Now, we haven’t been able to bring much change in terms of the amount of wastes getting out of the houses here but we have made a system, which can easily gather the garbage in a place, from where we can collect it. We have created a pit which has a wooden mesh in it , where the wastes from the homes via the naalaas gets collected. To ensure that any additional wastes don’t get into the cleaned lakes, we also created a patch of grass-land where these secondary wastes get stuck. Both the pit and the grass-patch is cleaned up every week, with the help of the village volunteers.” 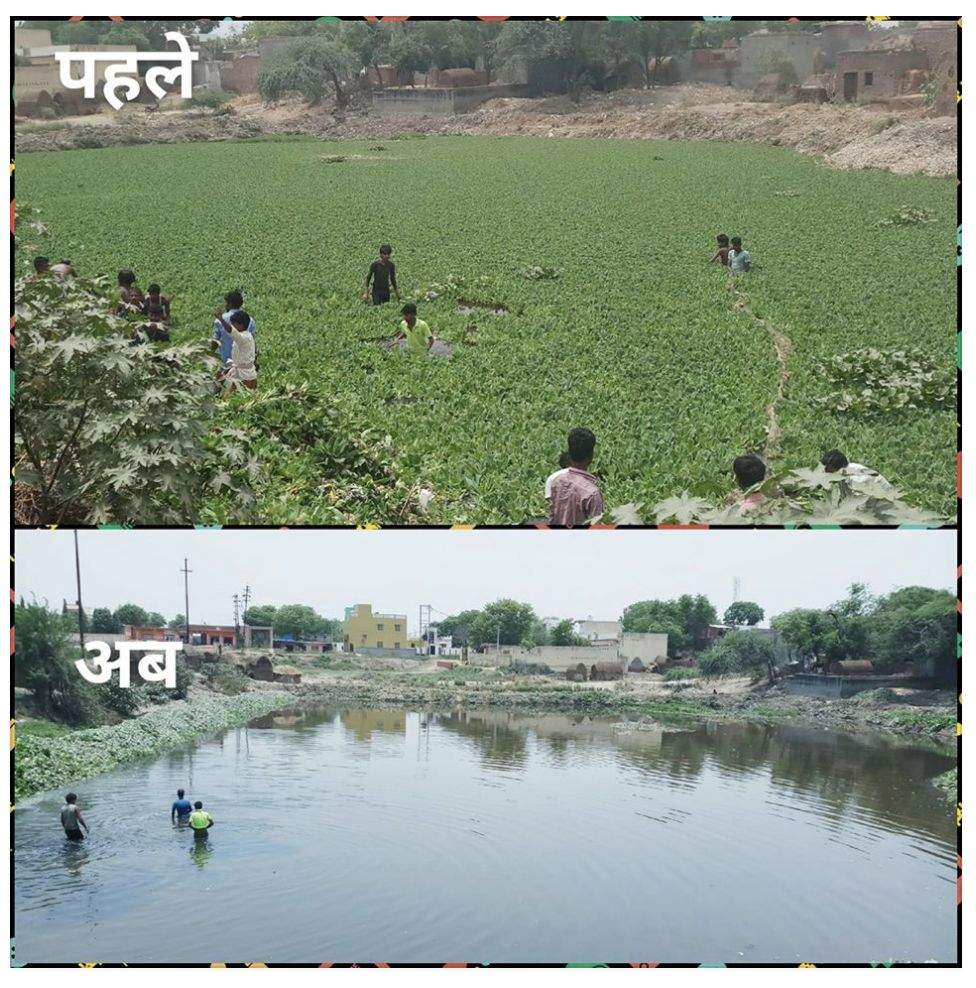 Beautified lakes: The 25-year-old often uses social media as a tool to highlight the impact of collective work and the difference it can make in conserving water

But what about the finer particles of waste which is bound to create slush and contaminate the water bodies? “We have adopted a system where we have encouraged fish farmers of our village to raise at least 10,000 keechad (slush) eating fish, like the katla fish for example. So obviously, the finer particles are eaten up by these fish (which is their staple diet for growth anyway) and eventually these are sold in the market. The money made from the sales goes to the fish farmers and is also directed towards maintaining the cleanliness of the water bodies and continue the rearing of the fish,” Ramveer explains.

What is better is that the villagers are now fully involved in the process. “While I can only ensure that a lake or pond is cleaned up once, it is upto the villagers to maintain it. And the good part is that now it is they who maintain this entire system and its expenses, in a cyclical way,” Ramveer says. 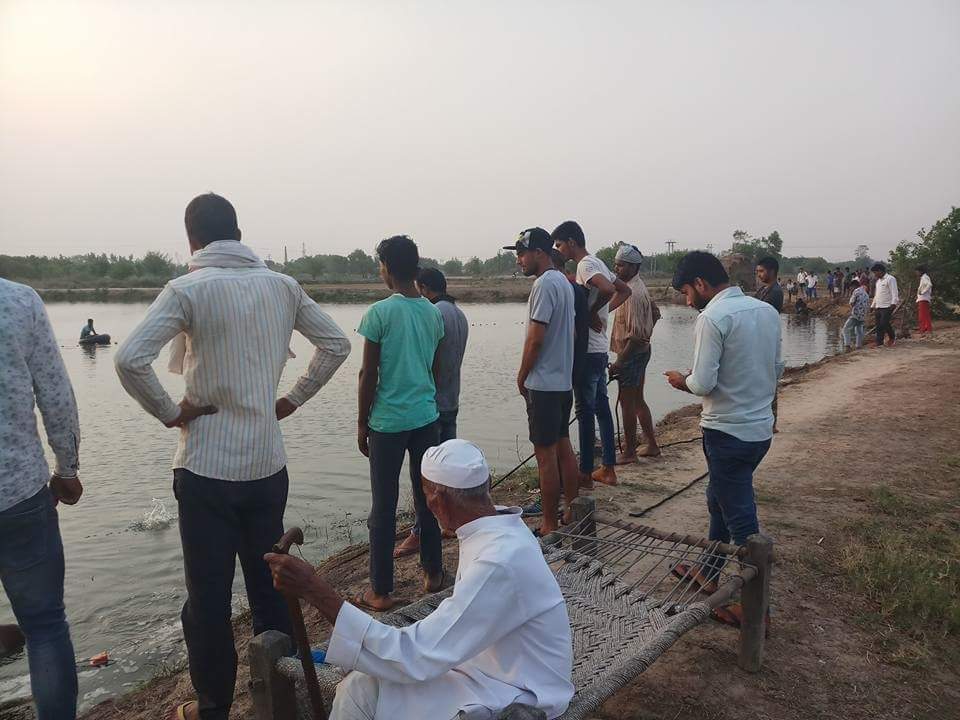 Working together: People from across ten neighbouring villages come together now, for the 'Jal Chaupal' programmes and also involve themselves in hands-on work

The simple man who heads the ‘Bhujal Sena’

Ramveer’s work also attracted activist Vikrant Tongad, who pushed Ramveer to also look into the technicalities of conservation via filing RTIs and PILs. Ramveer soon got into the legalities as well, which helped his case for conservation further. “In 2014, the authorities were trying to convert the Surajpur wetland in our district into an eco-park and children’s park. The wetland attracts different kinds of birds during the migratory periods and turning it into an eco-park would have ruined the serenity of the place. This is when us filing a petition came handy and the development authorities were forced to stop their constructions,” Ramveer says. Today, Ramveer and Vikrant work together in many areas of water conservation.

Soon after the success of the ‘Jal Chaupals’ and its results, the government of Uttar Pradesh recognised the immense impact of Ramveer’s work and announced the ‘Bhujal Sena’ - groups of villages which would focus on water conservation. Ramveer is currently the district co-ordinator of the project. “But the government has zero funds for the awareness programmes,” Ramveer says. “Even today, I have to shell out money from my own pocket to fill in petrol for travelling, make banners, etc - things which are important and impactful for awareness talks,” Ramveer says. 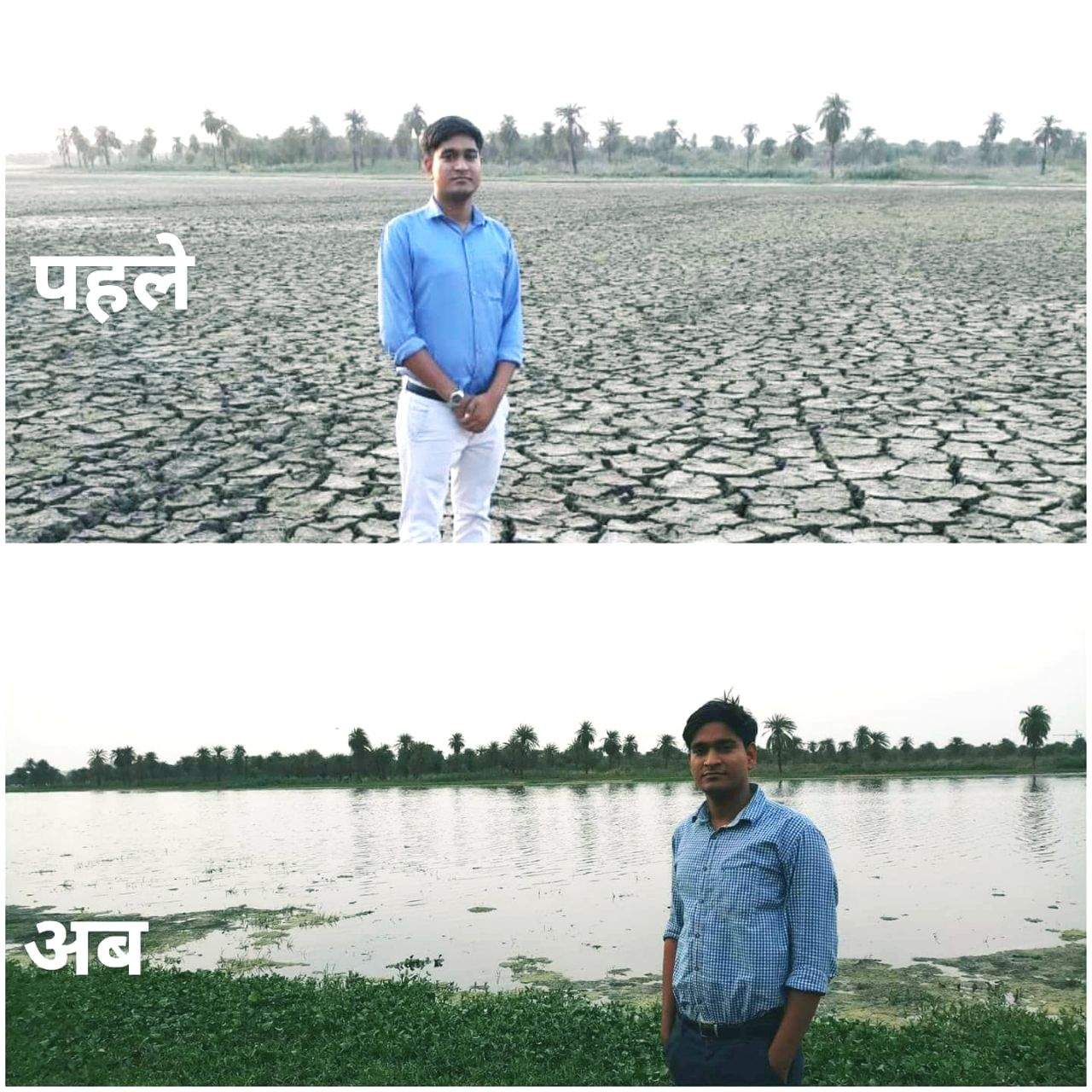 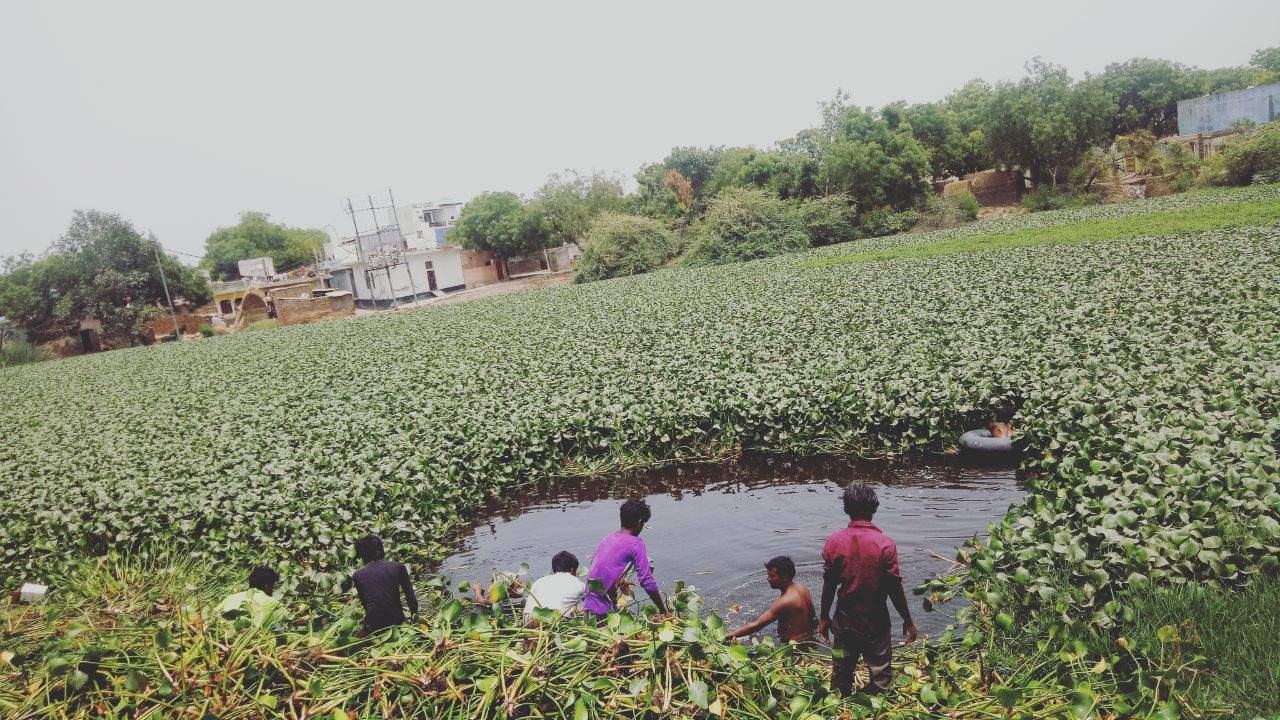 Ramveer today, is the appointed district co-ordinator of the 'Bhujal Sena' initiative by the government of Uttar Pradesh. This helps reaching out to larger numbers of people and getting them involved in reviving lakes and conserving water

And this is precisely why Ramveer has to juggle between his eight hour work shift and his work around water conservation. “If I have to continue with reviving the lakes and nature which dotted our childhood, I have to work as well, to be able to fund it,” Ramveer says. He goes to work at 5am everyday, six days a week; is back by 2pm, soon after which his conservation based meetings with officials and villagers begin. Sundays are no off-days either. “I have changed nearly five jobs so far, to ensure that I am able to make enough time for continuing my work in water conservation,” Ramveer says.

But doesn’t it take a toll on Ramveer, given that raising awareness has always been a challenging task? “It actually doesn’t,” he says. “To tell the truth, it is much easier with the village people - they are more eager to listen and participate. In urban areas, people don’t even want to touch dirty water,” Ramveer adds.

Maybe it is the simplicity of understanding among his people which keeps Ramveer doing what he does. “Here we do the work, hands-on. And it is the immediate impact that keeps me motivated,” he says, on a final note.