This sustainable theatre troupe performs Shakespearean plays on their bicycles

Co-founder of The Handlebards, Tom Dixon, speaks about being a cycling actor and making their theatre sustainable

The saying goes, 'You never forget how to ride a bicycle'. In the age of The Handlebards, it must be tweaked to say that you can never forget a group of actors who carry around their act on their bicycles. These four troupes of cycling actors perform Shakespearean plays across the UK by carrying around all of the necessary props and costumes on the back of their bikes. Last October, the group performed at Bengaluru's Humming Tree to a fascinated audience. We spoke to co-founder, Tom Dixon, about their brand of sustainable theatre and cycling their way to success. Excerpts:

What was the idea behind The Handlebards?

Paul Moss (a co-founder) came up with the idea one summer and asked us all if we’d like to join him. We thought he was nuts, but so were we, so we said yes! Since then, the company has grown considerably and we now have a lot of new actors and different troupes, including an all-female troupe who have just come back from Bengaluru.

Sustainable theatre is an entirely new concept. From personal experience, how important do you think it is for the entertainment industry right now?

It is incredibly important. Theatre, film, TV and music play a big part in people’s lives these days and can have a huge influence on what they think. I think it’s our responsibility as a creative industry to lead the green movement; to make it interesting and exciting for our audiences. 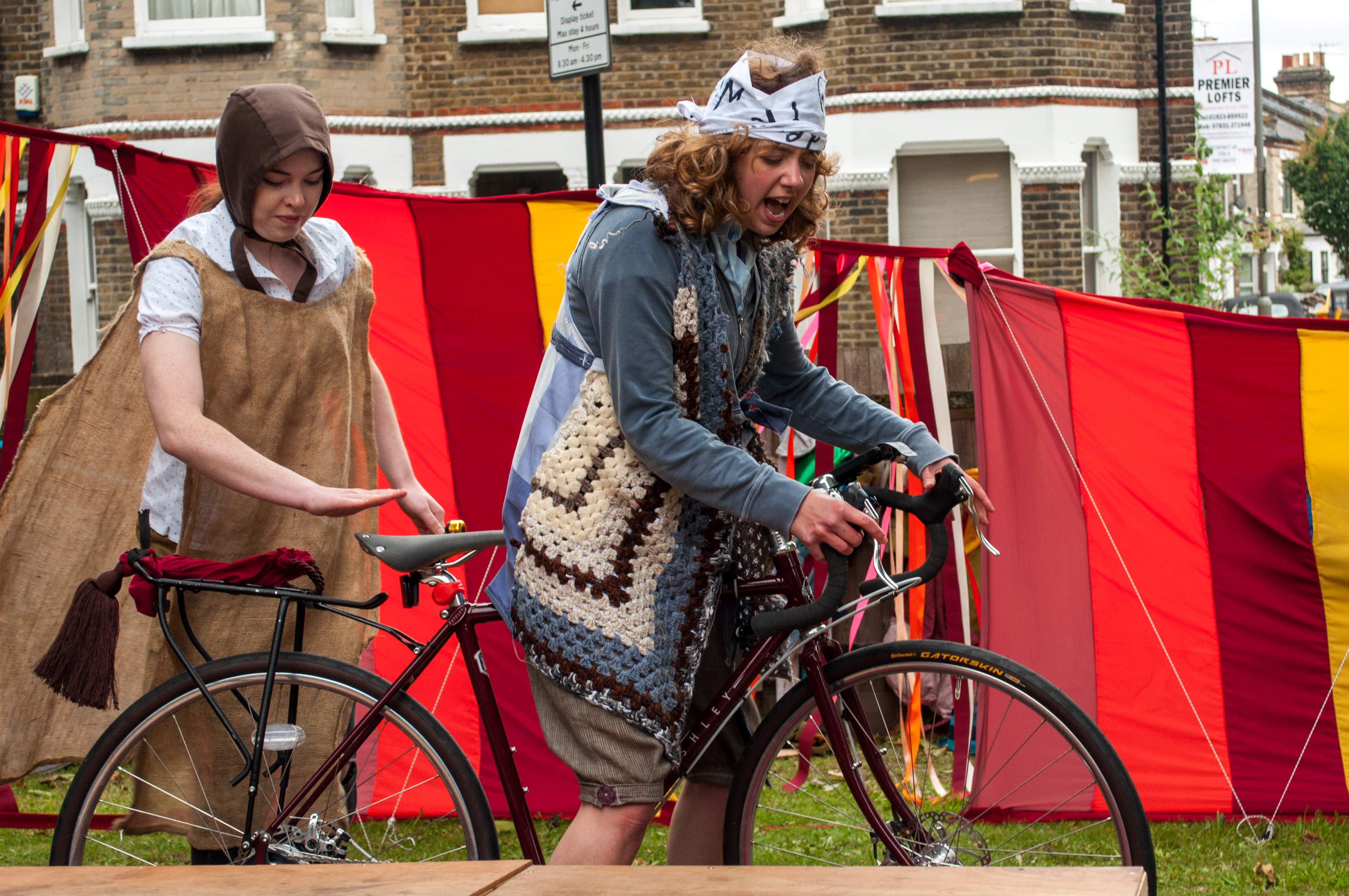 Cycle of life: The performers are divided into all-male and all female troupes

What are the most important values that help shape a successfully sustainable theatre?

The first step is to put sustainability at the heart of your organisation. We are currently growing as a company and visiting new countries, which is really exciting, but as we’re flying, it is increasing our carbon footprint. Rather than accept this, we are looking into ways to offset this footprint — by planting trees or donating to charities that can do that for us! Whilst the latter is quite passive, it is a good stop-gap while we try to set up our own active approach of planting the trees ourselves and getting our audiences to help us.

What is it like to be a cycling actor? How does it impact your process and performance?

When we’re in the UK, we start each day with a 30-mile cycle, carrying our sets and props in trailers on the back of our bikes. It’s heavy, slow and a killer on hills! We usually end up cycling for about 5 hours, setting up the show, performing, taking down the show and then sleeping. So, it’s a long day, but there is a lot to be said about cycling being a good warm up. It also definitely adds to the chaos of the show, which our audiences love; they are also very much on our side because they appreciate how hard we’ve worked that day. 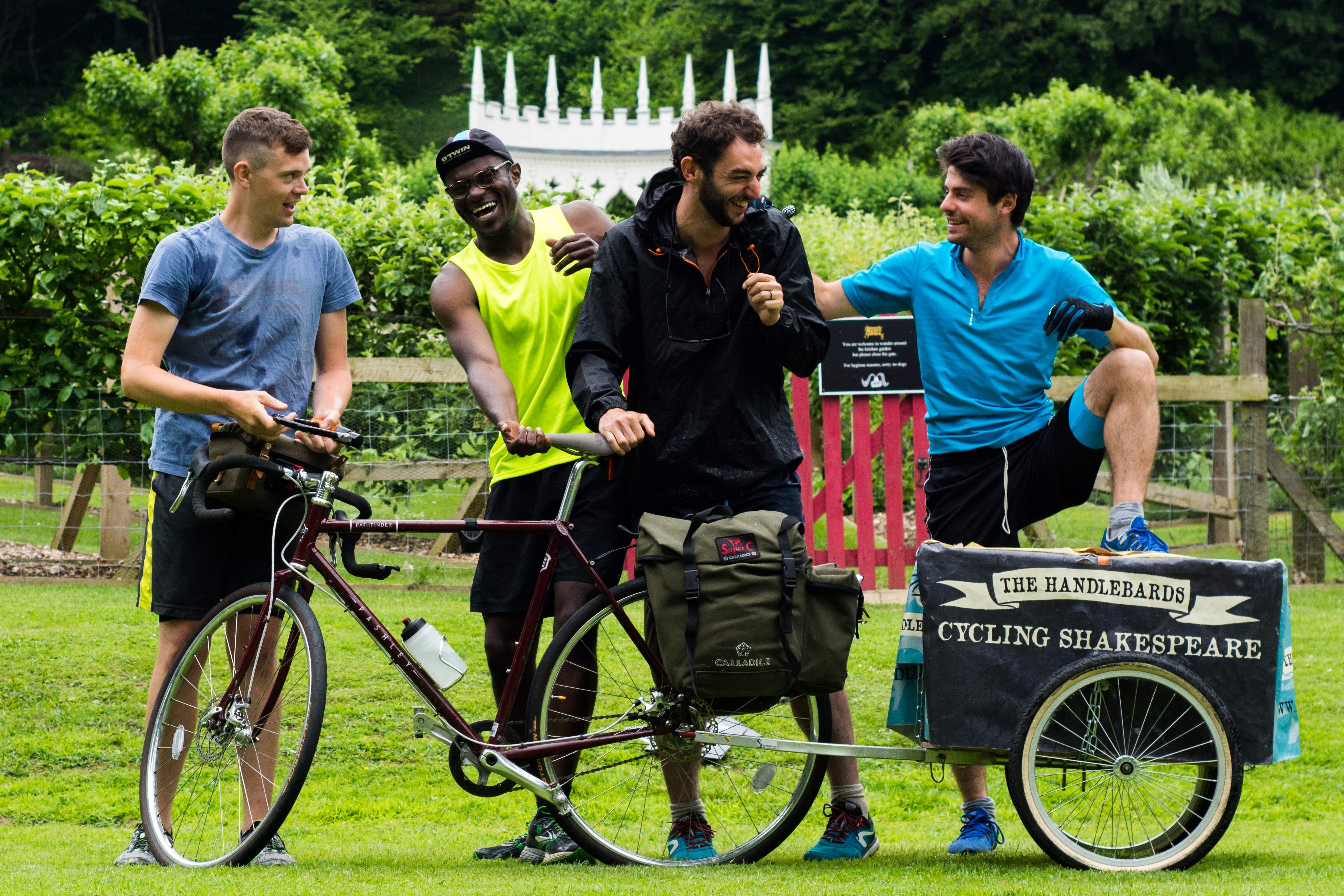 Tough act: The Handlebards follow the principle of sustainable tourism

What role do your props play during a show and how do you use them differently in each show?

Props and costume are usually cycle themed and their use often comes out of us playing with bits and bobs in the rehearsal room and thinking about how best we can use them to make people laugh.

What is the motive behind all-male and all-female troupes?

In our first year, we were a group of friends and we were all boys. We had a lot of fun playing both genders and our audiences enjoyed this too. We noticed that a few people said that girls would never be able to do what we do and so we decided we’d prove them wrong. As you can imagine, our all-female troupe have been just as hilarious and absolute machines on the bikes too; each troupe has its own identity now, which we really like.