At Barefoot College, people with degrees aren't given admission. Here's why

Being born in an influential family and attending an elite school and college didn't deter his determination to do something for the poor. We are talking about Sanjit 'Bunker' Roy, an educator and social activist who changed the face of a remote and arid village named Tilonia in Rajasthan. And how did he do that? This 73-year-old set up Barefoot College to impart training to the village residents in vocational skills. On his visit to the village in 1972, the alumnus of Doon School and St Stephen’s College started out by harnessing the skills of the village community in developing sustainable livelihood for women. Their Barefoot Enriche Curriculum helps women transform themselves and their communities in conjunction with training to become solar engineers and this provides them with the essential skills and knowledge to develop their sense of agency. We caught up with Bunker Roy to learn about his inspiration behind Barefoot College, his vision for the college and much more. Excerpts:

How and when did you start Barefoot College?

Soon after leaving college in 1971, I started working as an unskilled labourer, deepening and blasting open wells for water. That meant going down a 100 ft open well by rope and blasting it with explosives. I lived with very poor and ordinary people under the stars and heard the simple stories they had to tell of their skills and knowledge, and the wisdom that books, lectures and a university education can never teach you. My real education started then, when I saw amazing people — water diviners, traditional bonesetters and midwives at work.

That was the humble beginning of Barefoot College. It was not someone powerful and influential who inspired the work of the college, but very ordinary people with grit and determination. I had no projects and no money to offer, but just my enthusiasm and my hands. I lived and worked with them with no promises made. Through an unlearning process, I reached this approach of starting the first BarefootCollege which is the first of its kind. It is, I believe, the one and only college in the world built by the poor, managed by the poor and owned by the poor.

What is your vision for the college?

Incidentally, what Barefoot College is putting into practice is not a new approach. It is an approach that has already been followed by Mahatma Gandhi. The Gandhian non-violent approach is incorporated and institutionalised into the work style and lifestyle of Barefoot College. We strongly reject the classical arrogant, top-down development approach of the 'experts'. We aim to identify, respect and apply existing traditional knowledge and skills, and give practical skills more importance than theoretical knowledge. Just because someone is illiterate, nowhere is it written that they cannot be solar engineers, architects, designers, communicators, feed information into computers and construct rainwater harvesting tanks. There are many powerful ways of learning other than the written word.

Since the college works with the rural community, on what basis are the candidates selected?

Anyone who comes to the college with a paper degree or qualification is disqualified from joining the college. One has to be a dropout, cop out or wash out, poor, semi-literate, perhaps physically challenged, with no hopes of getting any job. Only then they are eligible to join the college. No one comes for the money because no one can receive more than ₹150 per month. They come for the challenge, the desire to bring fundamental and lasting change, the need to try new ideas, the possibility of making mistakes and learning from that experience instead of giving up and not trying at all. The boys and girls who come out of night schools are given the priority to join the college and eventually become Barefoot doctors, teachers, solar and water engineers, architects, designers, health workers and what not. 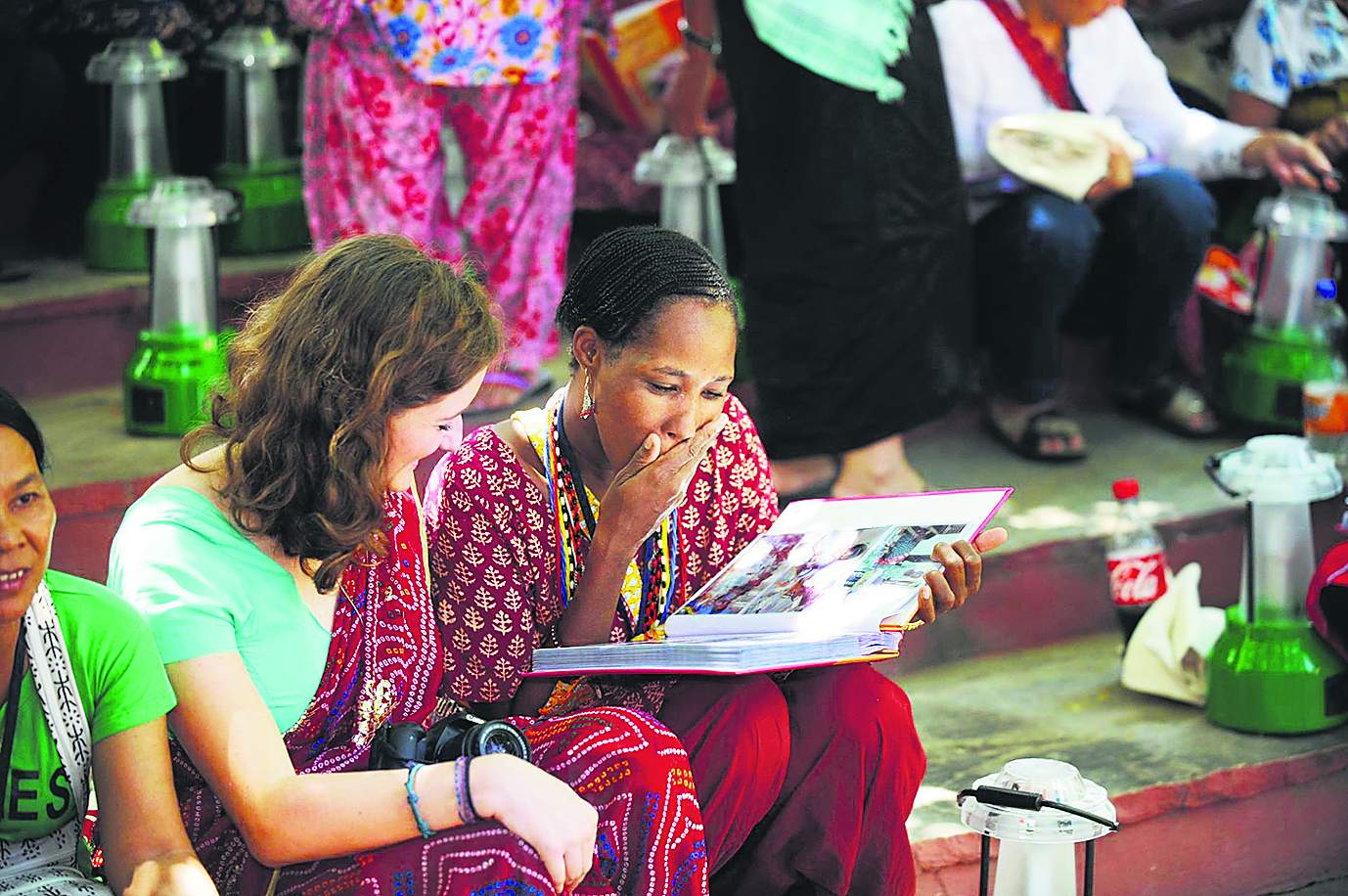 Be the change: Barefoot emphasises on the hands-on, learning-by-doing approach and focuses on poor communities in order to tackle social injustices

How is the college providing solutions to the water problems of rural India?

There is no question that there is a need to change the mindset among water engineers globally of water being a common resource. Water engineers have always considered the provision of drinking water as a technical problem. Whereas communities have always considered the provision, the distribution, the management and control of drinking water a social problem. Therein lies the great difference in perception and implementation, and because the poor do not have a collective voice, the resources in the rural areas are being over-exploited so that the lifestyle in the cities remain the same and the traditional resources of the villages (open wells) dry up.

Today, buildings are being built by architects and engineers, allowing the water from roofs to go to waste. Look at their badly designed schools, health centres, public buildings in rural areas and you will want to weep. Through the Global Rain Water Harvesting Collective (GRWHC), Barefoot connected the roofs to 50,000 litre underground, waterproof tanks and for six months of the year, children would not have to walk to collect drinking water during school hours. With low-cost, water-sealed, hand flush toilets constructed and rainwater readily available, more girls started coming to schools. With funds from the Government of India, the collective reached 1,300 schools in 17 states, networking with nearly 40 grassroots organisations all over the country, collecting nearly 50 million litres of rainwater that reaches 235,000 children. This simple technology based on common sense has been extended to Africa.

Meagan Fallone, CEO, Barefoot College International – India was recently announced as the 2018 Hillary Laureate. She is the 9th Annual Hillary Laureate chosen and celebrated by the institute’s International Board. Meagan attributes her most valuable education to having come from living amongst the simple rural community of Tilonia in Rajasthan, where Barefoot College is based

Do you have any political affiliations? Any links with organisations that you consider consonant with your social commitments?

I believe every development input in any poor community is a political act. The installation of a hand pump, the opening of a night school, the construction of a rainwater harvesting tank, the solar electrification of a village by illiterate women is a political act because it leads to the changing of attitudes, the asking of questions and the motivation to act. I have no political affiliations. I do not believe that political parties in India have a real feeling of the serious and critical problems that 70 per cent of India's population, who earn less than 50p/day, face. The colossal insensitivity of the major Indian political parties to the suffering of the poor is horrendous. 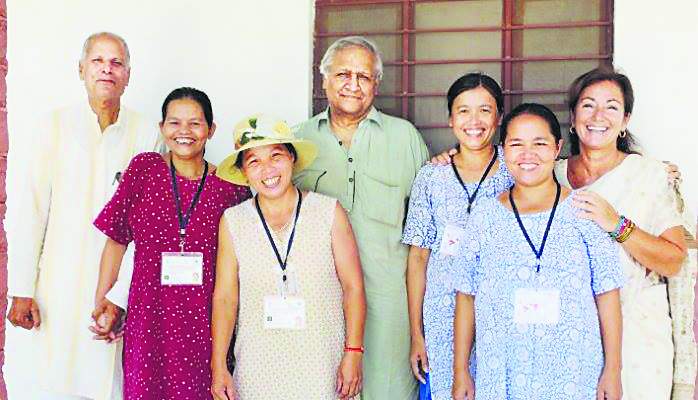 I understand that you have founded schools in Africa too. Could you tell us more about that?

I do not believe in brick and mortar buildings and calling them colleges. There are far too many around that are dead; beautiful buildings with no spirit of learning and curiosity, and taking risks where everything is mechanical, structured and hierarchical. Every woman, who is a Barefoot solar engineer who has spent six months in the college, is a walking talking ambassador of the Barefoot Approach everywhere in the world including Africa. Today, there are illiterate women solar engineers (many of them being grandmothers) in Gambia, Mauritania, Cameroon, Mali, Sierra Leone and Ethiopia who have solar electrified their own villages. Several illiterate grandmothers who were trained from Tanzania, Rwanda, Uganda, Malawi and Benin also solar electrified their own villages. There are no 'students'. Everyone is a learner and everyone is also a teacher.

Is it true that you have turned away financial contributions from the World Bank and from the US? If so, why?

No 'experts' from the World Bank, UN or foreign universities are invited to come to the college. If they come, they must come leaving their degrees and their outdated destructive patronising top-down approach behind and come as human beings with humility, patience and the willingness to learn from others, not to preach or pontificate. When the former president of the World Bank, Robert McNamara and the then president of Ford Foundation, McGeorge Bundy came to Barefoot College in September 1978, they came to visit as human beings.

We will not take funds from these organisations because they subscribe to an approach that is anti-poor, anti-poverty and they are full of very mediocre people with impressive paper qualifications and have very little practical experience.