The book "Bihar Diaries" is already topping the charts and is on its way to becoming a film too, directed by Neeraj Pandey

The police uniform had enamoured Amit Lodha from a very young age, so even though fate took him to the portals of IIT-Delhi for an engineering degree, he still ended up becoming an IPS officer. But maybe if he hadn't gone to IIT, he might not have known that he's a good writer, good enough to have a best seller someday. Lodha is the author of Bihar Diaries, a recently released bestseller, that tells the story of Lodha's work in Bihar and the arrest of one of it's biggest gangsters.

Published by Penguin, the book is a thrilling account of how Lodha arrested Vijay Samrat, one of Bihar's most feared ganglords, notorious for extortion, kidnapping and the massacre of scores of people. It also talks about the attempts made on Lodha's family by the gangsters. In fact in the book too, Lodha had changed the names of the gangsters because the men in question are out on bail and he doesn't want to take any risks. All this sounds like the writing itself might have been quite stressful for the officer, right? No. Not even a little bit, he says.

The funniest thing is Lodha says he wrote the book while watching the US Open, "I'm a huge tennis fan and a player, so since they both clashed, I watched the matches while writing. The whole process was very easy since it is a real story and I didn't really have to think up any ideas. Only in the first and last chapter, I needed to get creative but everything else is just the narration of what happened," he explained. The officer adds that he himself only figures majorly in the first and last chapter and most of the book is about the incident itself, "This is not a book to glorify IPS officers or me. When I narrated the story to a friend, he had suggested that it was worth a book, that's what got me thinking," he says. 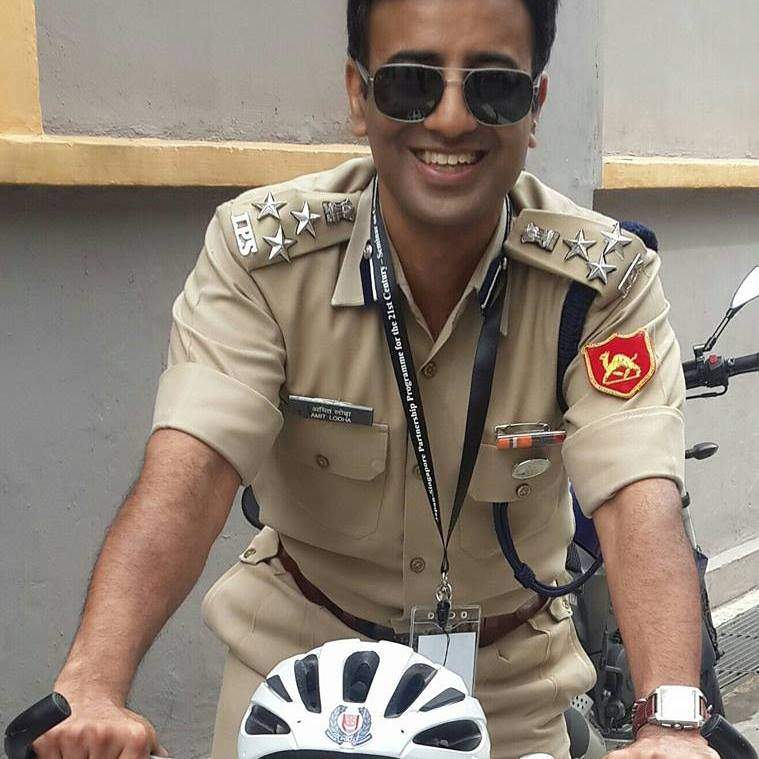 As police officers though we cannot afford to have these doubts. The great thing about being a police officer is that you get immediate results. There's no better feeling than returning a lost child to their mother

This friend is none other than celebrated Bollywood director, Neeraj Pandey, "We were talking about how it could be made into a film but he suggested that it would also make a great book. That's when I gave it some serious thought and figured why not give it go. I had always had a flair for writing and I remember that I wrote quite a bit when I was in college and my friends quite liked it. They had said then that I had a great sense of humour too. So I decided that I could write a book," Lodha recalled.

But when he was in college he didn't really think he would ever write a book, "I wrote a little bit in college, like I mentioned and my friends loved it but I never thought I would ever be capable enough to write a book. Then Chetan (Bhagat) went and became a bestselling author, so I figured an IITian like me could also write a book."

Lodha was appointed in Bihar in 1999, when he was only 25 but was not even slightly intimidated by its well-known gangster troubles, "I had the support of my wife and if your family is happy, you are automatically happy. I also had very good postings under all the regiments thankfully. The local people were always kind and made us feel comfortable. " Lodha says it was a time where he also got to spend a lot of time with his family, ironically even though it was probably the busiest time of his life. This was because the local police building had issues and Lodha worked from home, "I was lucky enough to see my children grow up in front of my eyes for those few years," he said.

But Lodha says that when he was posted to the village where he nabbed the antagonist in his book he was a little worried but he says the feeling was fleeting,"As police officers though we cannot afford to have these doubts. The great thing about being a police officer is that you get immediate results. There's no better feeling than returning a lost child to their mother. So when I started to meet people who were suffering because of issues like kidnapping and gang trouble I knew I had to stay there." And of course he stayed and like they say, the rest is history.

He reinstates that the book is not about him at all, "I'm only on the cover, that's all." Besides the case, Lodha says the book also talks about family and the force, "There were repeated attempts on my family but they never told me to pack and leave. They stood by me and that's why this story is appealing to all sorts of people. A lot of women are also writing to me to tell me how happy they were that this book just isn't about an officer but about his support system too."

The foreword to the book has been written by Twinkle Khanna and both she and Lodha hope that her husband, Akshay Kumar will play him in the movie. This was probably one of the very few times, that the film pitch became a book first. But does he think he'll write a book again? "I already have a book deal and I have started working on it too," he says smiling. Well, we have no doubt that'll be on the bestselling list too!