Petrichor by Vipin Dhanurdharan celebrates tales from the undercurrents of Kochi

Vipin Dhanurdharan speaks about his latest art project, Petrichor and trying to bring light to a forgotten part of Kochi

As I stare at the red screen print gifted to me by Vipin Dhanurdharan after our conversation about his artwork, the words come trickling down to the tips of my fingers just like the water into his aluminium cans. Between gently sipping his tea and occasionally tightening his man bun, he relayed the journey he had been on for the past two months through the numerous pathways between the thick network of canals in Fort Kochi and Mattancherry. The product, titled Petrichor or the smell of fresh rain, is a work of performance art so riveting that viewers swear that the sound of dripping water doesn't leave them for a few hours after.

In the video, Vipin can be seen in a simple shirt and a loosely draped mundu, clutching a can tightly as he makes his way from waterbody to waterbody, carrying it back with him. The work was first presented during an art show called Mattancherry, which took place at URU Art Harbour. “The project was about the city and I wanted to present a piece of it that had the people and the places that meant the most to me,” says Vipin, who originally hails from Kollam but calls Kochi (where he moved to for his work with Kochi Muziris Biennale) his ‘home of 6 years’. 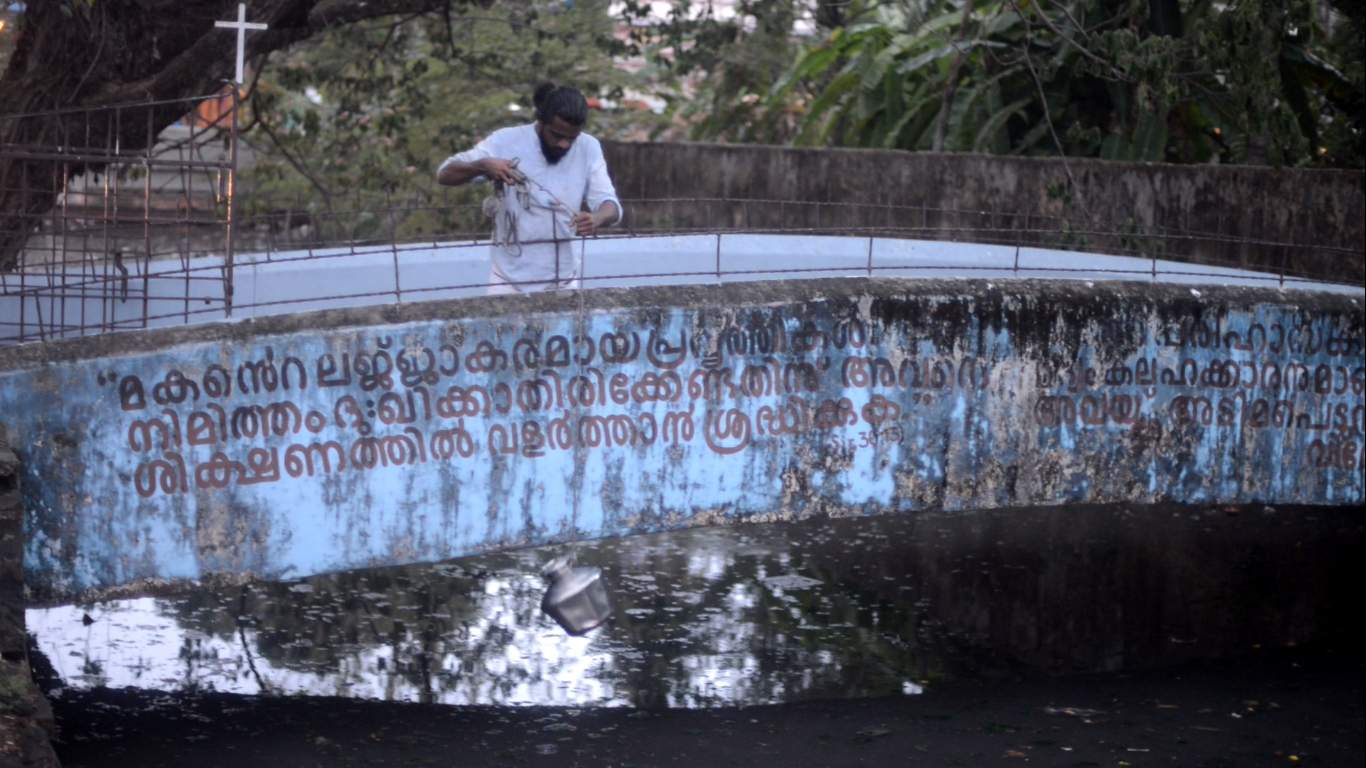 Trickle down: Vipin wanted to bring focus towards places hidden within the city

Vipin goes on to say, “When people normally speak about Kochi or Mattancherry, there are some things that they always bring up like the fishing nets. Yes, these parts of the city are beautiful and will always be there. But it was the people living in between whom I wanted to visually represent. And I wanted to put them out there, unfiltered. We’ve all seen the beauty of the place through Instagram filters, but I wanted people to see the real deal with the blinding heat, the pollution and everything that comes with it.”

Vipin had always been particularly fond of representing people, places and time through his work. “My work records the history of the place and documents the truth about that area. I don't deliberately watch people, it just happens naturally when I’m around things that evoke love. Even in the video, I have taken longer routes just to include little tea shops like the one from where I usually get my morning tea. There are people living in these places. Soon, it will be covered up by a big café or a high rise building as their neighbouring areas have become, so I wanted to document it while I still can,” he says.

“If we ever have a dialogue about this waterbody, the most crucial aspect and what we need to focus on are these people. They are blamed for waste and drainage problems in the area, but how can we blame them?” asks Vipin, “As long as we are unable to provide them with a solution, we cannot ask these people, who are getting by with cent of land , to build working toilets themselves.”

If we ever have a dialogue about this waterbody, what we need to focus on are the people. They are blamed for waste and drainage problems in the area, but how can we blame them? As long as we are unable to provide them with a solution, we cannot ask these people, who are getting by with cent of land to build working toilets themselves

Today, Vipin has managed to bring these hidden parts of Kochi to one of the most accessible parts of it. The same installation has been set up behind an unassuming wall in a corner of LuLu Mall. The show was inaugurated on March 22, on World Water Day and will run until April 8. But to Vipin, it is not all about the water. “It was more personal to me; it was about the people themselves,” he says. The people who live between the canals can be seen walking by in the video.

Vipin agrees that the meaning has evolved with the change of venue. “Here, the meaning did change to water conservation and a host of other concepts. It has become a more site-specific work,” he says. For the artist himself, the most important part of the project was to kickstart a conversation between people. He adds, “In Biennale galleries, the crowd already knows what they want to see and are artistically educated. But there's a whole other crowd here who can benefit from art. I was specifically asked to display this piece and I grew interested in how it would change in this way. It has grown to be about the people watching it.”

The art continues to grow even more personal for Vipin. “As a part of my job I frequently visit vendors and others living in pockets around Kochi. They have told me about the days when they would swim and rejoice in these waters. It is clear that these areas used to be very rich and were visited by people. If we had maintained it in that way, the sort of tourism we would have seen would have been of a whole other level. Venice would have been pale pin comparison to Kochi’s backwaters,” says Vipin, cheekily. 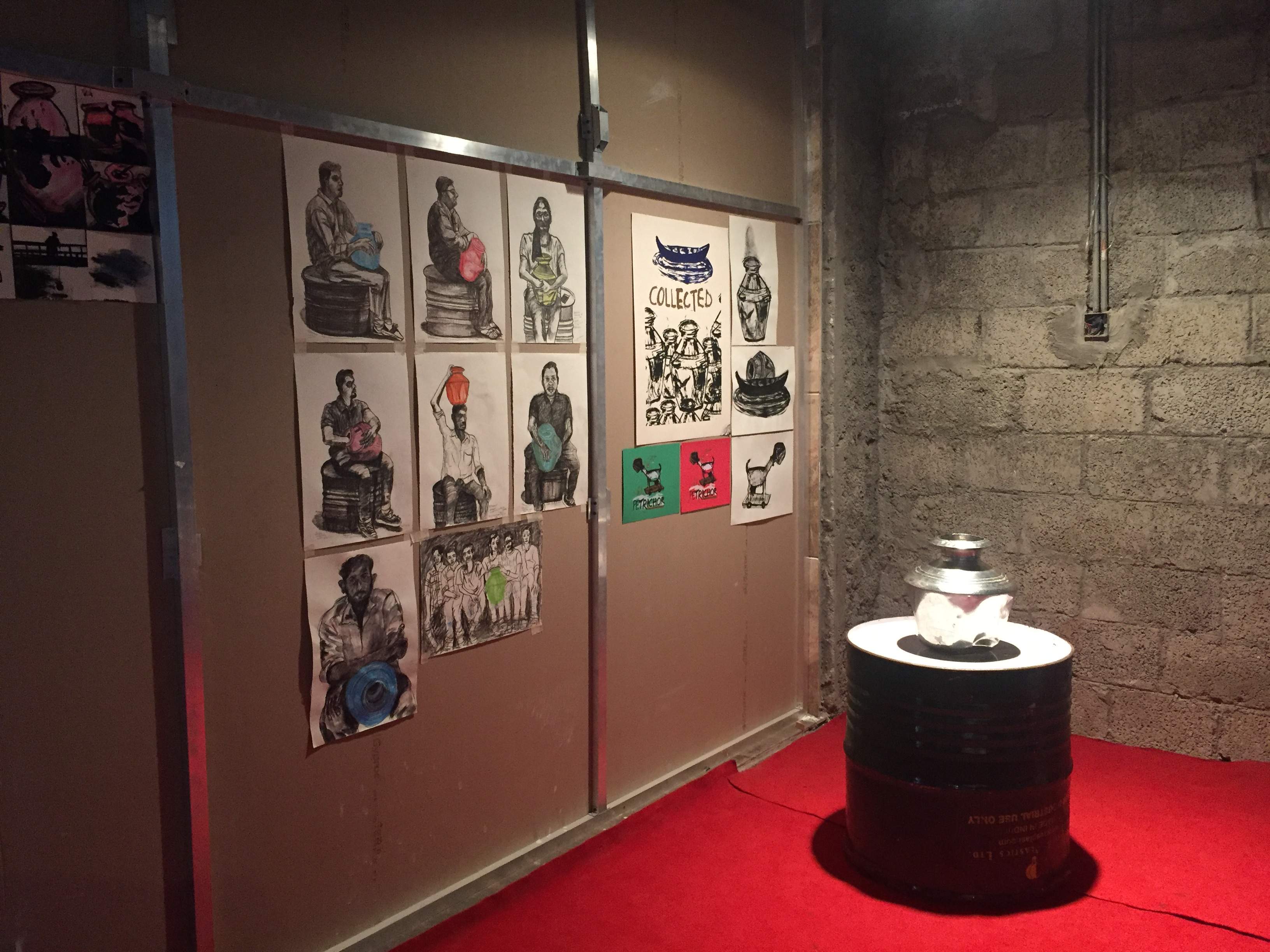 Print pods: Vipin is currently experimenting with screen prints of his work

He continues, “The same is true for a city like Chennai or any other city in the country. They all have a small canal at the back, which is inevitably dead and for people who walk by in a fraction of a second, this is not a problem. But this is about the people who live in these miniature worlds.”

This was Vipin’s first group project and one through which he was able to explore more of the artistic world outside his own studio. He has also been planning upcoming projects. Currently, he is experimenting with screen prints by hanging them up in the gallery and allowing people to just pick one up to take with them. He says, “The idea is to create an archive. Each screen print that a person takes away, registers the brief time that they spend here and it can get a conversation started. Only print has the ability to do this better than any other mode of art. Sometimes, I get to calmly draw the visitors as they sit engrossed. It has all become a part of my process, it is an extension of the archiving that I do.”

The video ends with Vipin laying a bed on top of the large tanks of water that he has collected from across the locality and decorating it carefully with a beautiful bedcover and fluffed up pillows. He lays on top of it, curls up and falls asleep, only to slowly float away on a boat. “I see it as the Kochi we live in right now. We live in this ornate and decorated world while the old one stands brimming and sturdy below us,” he says. I stare at the red print as I walk away from Petrichor. It is not the fresh smell of rain that lingers, but the water flowing in from an old and forgotten world.