This 33-year-old Lymphoma survivor has six masters and one PhD degree to his credit. Here's his secret

When Manu Melwin was diagnosed with lymphoma, he could have easily withdrawn to a shell. Instead, he turned his life around by deciding to learn more

A man with multiple degrees and a game-changer in the field of gamification, 33-year-old Manu Melwin Joy's passion for learning and acquiring new knowledge has no bounds. To this end, this certified trainer and Assistant Professor at CUSAT's School of Management has degrees of varying kinds.

Manu's tryst with learning newer subjects began when he was diagnosed with lymphoma in 2004. A fresh graduate out of Government Engineering College Thrissur, the treatment forced Manu to take a two-year break. "In those two years I did absolutely nothing but read. It was this reading that helped me realise that engineering wasn't my cup tea," says Manu.

Having had prior experience of training parents in Don Bosco School, Manu was sure to follow a career in training. Following the break, he was back in action, acquiring degrees to enhance his field of knowledge each passing year. Soon he completed his MSc in Psychology from Madras University through distance education and then, he received his MBA from Amrita School of Business, Ettimadai.

Trainer Brainer: Having understood the relevance of gamification in classrooms, he has successfully implemented gamification for his lectures

When we ask him where he developed so much interest in such varied subjects, he replies, “As trainers, we need different perspectives when we interact with students, professionals and parents. That's why I learnt more about Psychology and Physiotherapy." However, his quest for knowledge didn't stop after acquiring a job. (Wait, there's more?) Soon, he did his PhD in Social Science and then a Master's in Sociology. "My profession demands newer perspectives and all subjects I learn are related to one another, and thereby to my profession," he adds.

Manu, who has 15 years of experience in training, has specialised in transactional analysis — a branch of psychology that deals with the theory of child development and personality. However, for Manu, training is just a passion that he manages along with his regular job at CUSAT. It was during this time, that he showed interest in gamification and he took an online course from the Wharton School, University of Pennsylvania. 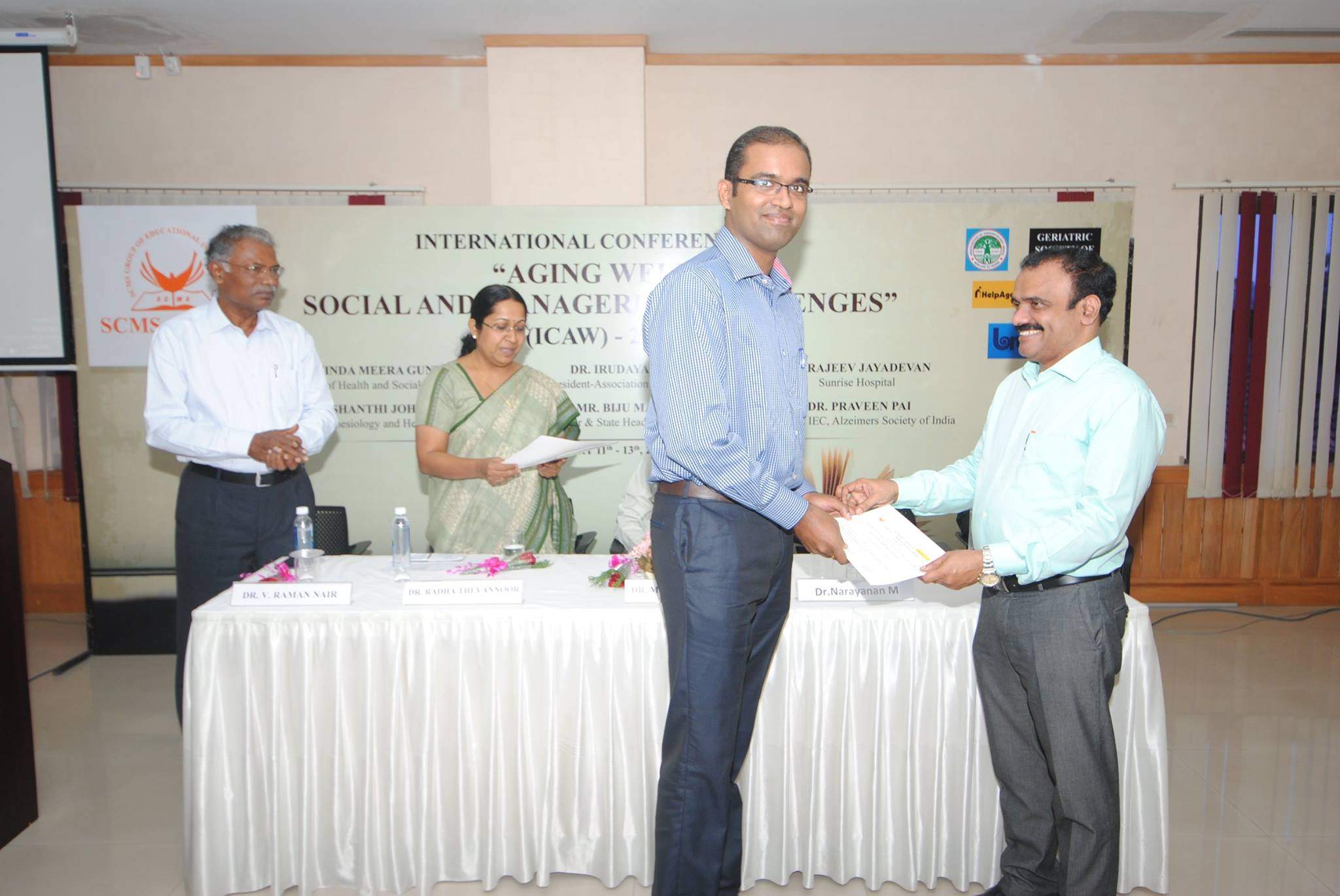 Right reward: Manu being felicitated after a training session at SCMS Cochin School of Business

Soon enough, he tried his luck at gamification in class only to find a huge difference. "As part of gamifying my class, a lot of activities and game-based learning techniques were introduced and as a result, I am able to take lectures for six hours straight as students find it thoroughly interesting," Manu adds. Over the span of one year, Manu has held many workshops and training sessions at various colleges on how to effectively gamify a classroom. "Even though gamification is at a nascent stage in Kerala, it is slowly coming up. I get a lot of queries and several invitations to speak about the subject," says Manu.

A family man with a wife and two little girls, Manu manages his existing time effectively to do all that he does. "In the case of my gamification course from Wharton, I downloaded the whole lesson on my mobile. So, on my way to college or say during a long wait at the doctor's office, I would take my lessons," says Manu.

As for his future plans, Manu hopes to open a gamification consultancy and conduct workshops and training sessions. But his hunger for learning isn't going to stop anytime soon. "I am planning to do my postdoctoral fellowship abroad. As far as online courses go, my next topic will be on design thinking," he says, nonchalantly.