The Indian Ink Theatre Company is a treasure trove of human emotions. Whether it's deep-rooted in a series of poignant writing or hand-painted onto a quick succession of masks, what you cannot miss is this New Zealand-based theatre company's love for all that is deeply felt. Justin Lewis gets candid about what brought him and his co-founder, Jacob Rajan, together and their journey towards recognition. Excerpts:

What led to the inception of Indian Ink and what kind of stories did you want to tell initially?

Jacob and I met 20 years ago when we were working on a show together. Jacob was performing using a mask and I had gone to a drama school in Australia specifically to study masks. No one else in New Zealand was really doing mask theatre at that time and so we got talking. We found that we had a shared love of the theatricality that masks bring along with a deep love for stories. Krishnan’s Dairy was the first play we created together. It tells the story of a migrant couple who open a convenience store in New Zealand. It has become an enduring classic and last year, we toured it in India for the first time. I think most of our stories feature ordinary people as heroes. We aim to tell stories that speak to our shared humanity regardless of nationality, race or religion.

Your shows always have a sense of humour to them. Do you intend to be satirical or is it an organic result of your writing?

We have a philosophy we call the 'serious laugh’ - using laughter to open the audience up before slipping something more meaningful in. The humour is inherent in Jacob Rajan and we use it to entertain and lighten serious messages. Our humour is more gentle than satire, it is born out of a deep love of the foibles of our characters, profoundly human weaknesses, pomposities and misconceptions. 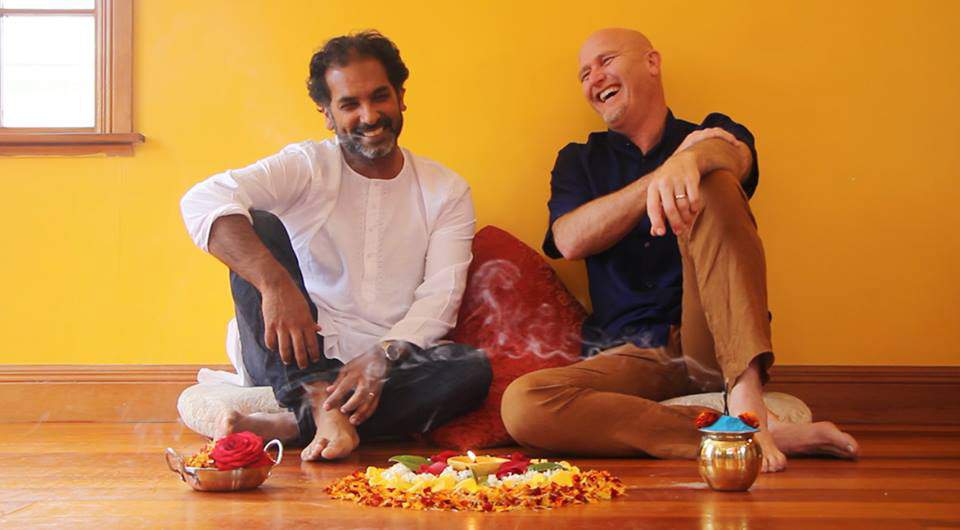 Masked duo: The two met when Jacob Rajan (L) performed on stage using a mask which got the two talking about masks theatre

You draw a lot from culture. For instance, Jacob Rajan uses Malayalam words and usages in his show Krishnan's Dairy. How has your heritage affected your performance and writing?

I am a fourth generation New Zealander whose ancestors migrated from Scotland, Wales and England. New Zealand is founded on a treaty between the indigenous Maori and the British Crown, so we have an appreciation and tolerance of different cultures. Of course, we are not perfect and most of the ill-effects of colonialism have played out here in New Zealand too. I think all these things have helped me work cross-culturally with Jacob. New Zealand is one of the youngest nations on Earth in the middle of vast ocean. This youth and distance means that for generations we have had to make things for ourselves and that plays out in the theatre Jacob and I make - it is something that could only be born here.

Are you inspired by the people around you?

My inspiration as an artist comes from my experiences in the world. Encounters with people in Bali, India, Malaysia, the United States and here at home have all found their way into our plays. Often, it is ordinary people, their quirks, dreams and struggles that inspire me most. We work in the tradition of the Commedia dell’arte and that is drama of the common person. Of course, I also have heroes such as my theatre teacher, John Bolton, and writers such as Rohinton Mistry, Tim Winton and William Dalrymple.

Was it a creative decision to use masks? How has it changed the way you perform?

Masks are at the heart of our creative practice. We use masks from both European and Asian traditions and have re-imagined them to speaks to contemporary audiences. Masks have theatricality; they release the audience’s imagination and most importantly, they release the performers’ imaginations by requiring them to let go of their ego and transform themselves physically and vocally to match the mask. It makes for larger than life characters that still have some archetypal truth. Most importantly, it is something that only works live, it doesn’t translate to screen and so it offers the audience a compelling reason to get off their couches and get to the theatre. Masked feelings: While dieas are taken from different countries and cultures, the plays also have  a strong Indian vibe

How have people responded to your shows and how has it varied across countries?
People love the flavours of India that permeate our work. It takes them inside a new world and offers them insights that connect emotionally as well as intellectually. It is rarely that people haven’t appreciated our work, but the way they respond varies according to their culture. When we have Malayalis in the audience, they will laugh at things no one else does. In New Zealand, people are more circumspect and getting a standing ovation is a huge honour. We have performed throughout New Zealand, Australia, the United States, Singapore, India, Germany and Scotland. In America people are expressive and they freely give standing ovations.