The Dying art: Theyyam seems to lose its colours with smattering income but this Kerala man won't give up on it

This art-lover from Kerala is successfully superseding his ancestors in creating characters through brushes in Theyyam, and he's has been doing it for 25 years now

Raju Kavuttan recalls the time he eagerly watched his father and relatives work meticulously with paint brushes creating striking characters on people’s faces. He knew right then this was where his future lay. For an art-lover who spent a major part of his childhood in temples and green rooms, Theyyam is not just a ritual dance, it is a passion.

Having spent nearly 25 years painting the faces of Theyyam performers and creating ornaments and costumes for them, Raju says he cannot dream of entering any other profession. "I am a self-taught artist and face painting is an art my family has been traditionally practising for years," he says.
Raju is in the city to take classes at a two-day face painting workshop conducted at the S K Pottekkatt Cultural Centre by the Folkland Academy. According to Raju, who hails from the Pulayar community in Kasargod, Theyyam is an art form with strict boundaries and is presented only by seven communities - Malayan, Pulayar, Vannan, Mavilan, Kopalar, Velan and Anjunnoottan.

The performances are usually conducted in temples of these specific communities, local shrines or in houses as a ritual. “There used to be around 400 types of Theyyam faces, each representing a Hindu mythological character. Many of those have disappeared now. Each community has a certain set of characters they dress up as ” he says.

Speaking about the evolution in Theyyam make-up, he says the face painting styles have developed and synthetic dyes have replaced the natural ones. The demand for performances have also increased and the ideal period for performing is from mid-October to mid-June. “During this eight-month period, we receive calls from nearly all the households and temples in Kannur and Kasargod. The popularity of the art form is certainly on the rise,” says Raju. The face-painter who has visited the US, France and Korea for Theyyam performances, however, believes the art-form is more welcome in foreign countries than in India. 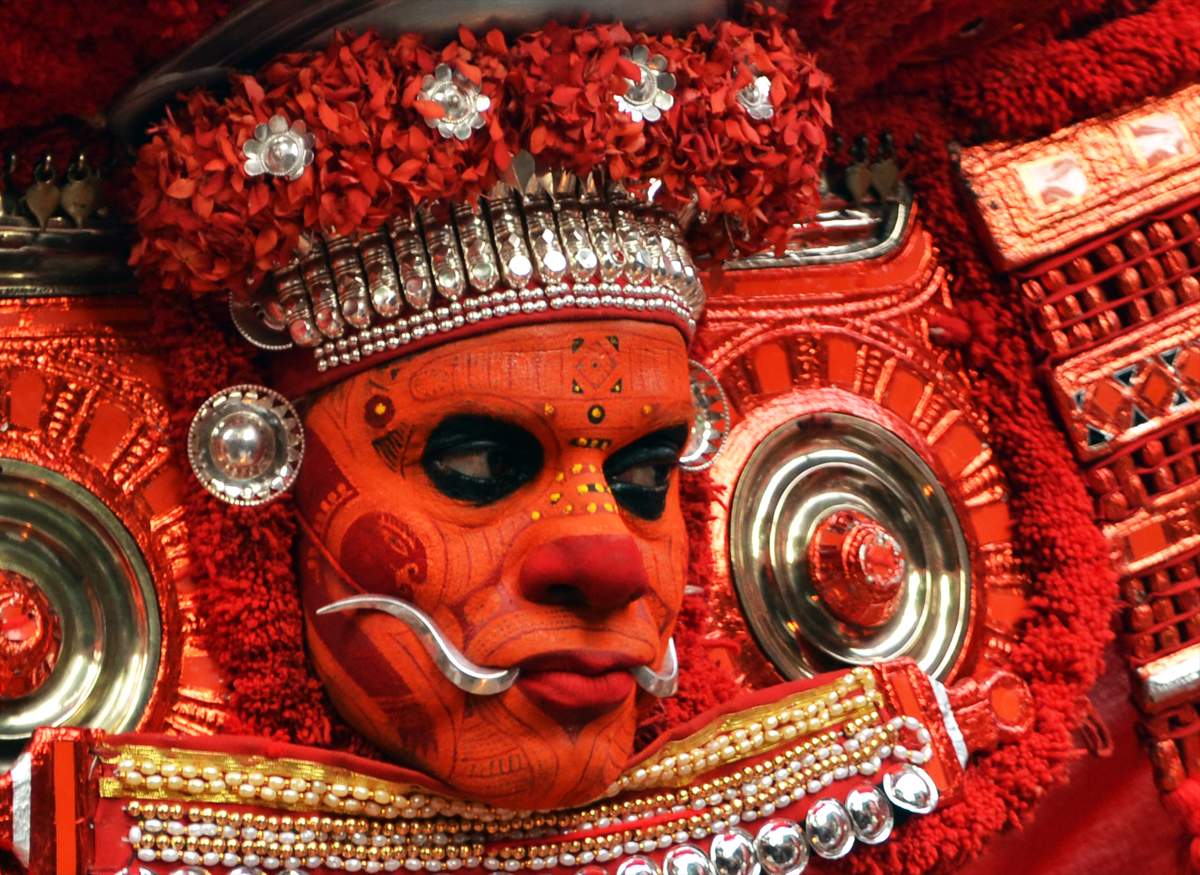 Art & living: The performers receive around Rs 3,000 to 5,000 for a two to three-hour performance (representative image)

In spite of its popularity, Theyyam is not a financially profitable art form. Even now, the performing team, usually consisting of five to 10 members including the face painters, singers and dancers receive only Rs 500 in all. The rest of the money comes from the audience as offerings. While performing in households, they receive around Rs 3,000 to 5,000 for a two to three-hour performance.

C K Sivadasan, a Theyyam performer and face-painter, who was also present at the workshop, says this is not enough to sustain a livelihood. “I’m also working as a guest lecturer in the School of Drama and Fine Arts, Thrissur,” he says.

Low income means a decreasing number of Theyyam performers. Folkland Academy Chairman V Jayarajan says the present generation is more interested in taking up engineering or medicine. "Only the men in these communities are allowed to perform and practise face painting," he said. "In addition, the artists do not get any certificates for performing at a temple or household. So youngsters prefer taking up jobs that are more stable. If this continues, Theyyam could disappear sometime soon."
The academy is trying to spread the art form through workshops and performances at the state and national levels.