From Kashmir to Kanyakumari: Read the story of the man who cycled for the upliftment of children

Wanna feel like a kid again? Riding a cycle is the best way to do that. But turn it up a notch and cycle for a cause like Dhandapani Loganathan

Women empowerment. Equality for all. Education for all. Indeed, there are enough causes in the world to fight for and several ways to do so. And it's common knowledge that what unites people are the causes they support, rather than how that support is shown. You may be paying for an underprivileged child's future, or teaching one — the goal is one, to educate.

And this is the cause Dhandapani Logonathan is pedalling for. It is said that charity begins at home. And so does compassion. Dhandapani Loganathan's mother is a social worker by profession, but for the 27-year-old, she is a pillar of strength — a place where he draws his strength from, while crusading for several causes like women's safety, road safety and the like.

For the same cause, Loganathan will travel from Gujarat to Arunachal Pradesh in another two months

From August 15 to 22, Loganathan travelled from Kanyakumari to Kashmir on a bike, which is an unbelievable feat by itself, but he wanted to raise the stakes. For the cause of prevention of child abuse, the Coimbatore-based activist travelled from Kashmir to Kanyakumari on a cycle. "I need to create a new record, that is my way of spreading social awareness," says Loganathan. We caught up with him when he had just made his way through the treacherous roads of Srinagar. "I was stalled there for four hours and in that time I even got to participate in a protest," he says, laughing.

Come rain or sun, whether it's too hot or it rains — my aim was to keep going

Loganathan began his journey on October 2 and touched base at Kanyakumari on October 15. His Facebook timeline tells the story of his travels explicitly, but not of certain roadblocks he faced and bad roads were just the beginning. Loganathan had foreseen more problems and was fully aware that the path he had chosen was a tough one. "I was also scared about facing the rains in Telangana and Andhra," he says, and one can sense the worry in his tone. But that was immediately followed by, "I kept on riding as I needed to ride 250 km per day," he says, standing resolute. It sounds back-breaking, but that doesn't mean he pushed his body to the limits. A 10 to 15-minute break every 25 km and a 30-minute rest for every two hours helped him in the long-run. Last leg: Dhandapani Loganathan at almost the end of his mission

Working up to a staggering 3,30,000 rupees, the software engineer from Coimbatore self-funded 75 per cent of his journey and he profusely thanked his company for funding the rest. "I don't know about other companies, but my company is very supportive," he says, while informing us that his company granted him paid leave while he was out there, achieving greatness on a cycle. He also has Sundar Pichai to thank, "for Google Maps, you know," he says and laughs jovially.

And then his tone mellows down and he says, "I have one request. Please do mention the name of Sathish Kumar," and he goes on to tell us of how Kumar had also been on the same journey with him all along, on a bike, and we can't help but think that if his family inspired him to take this journey, it is his friends who keep him from going astray. 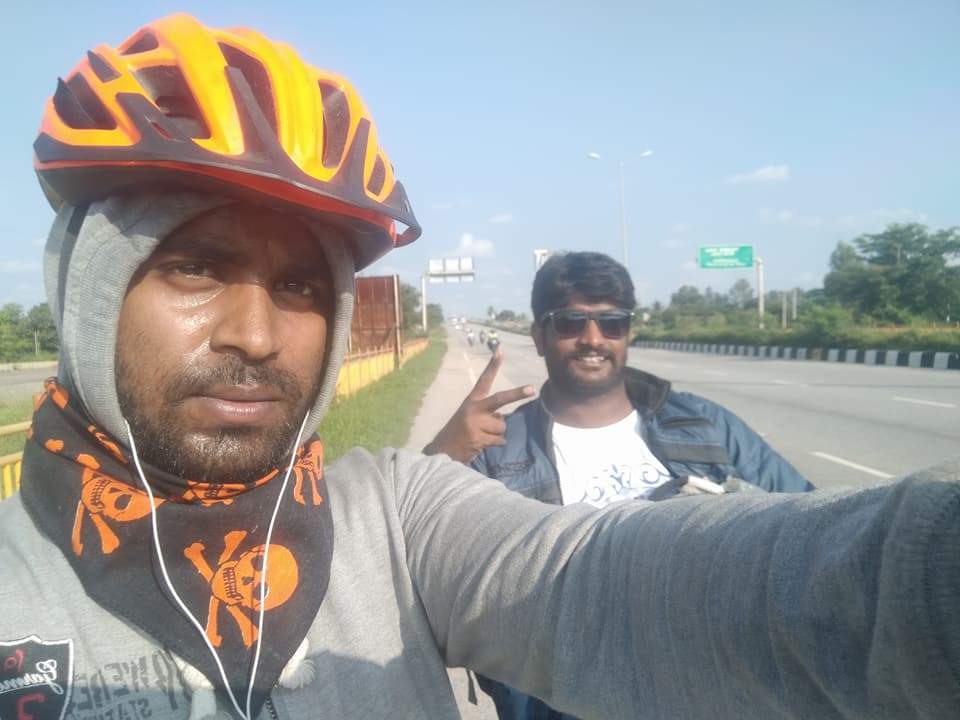 Loganathan also distributed pamphlets related to his cause while on this journey. Indulging in selfies with bystanders is a way through which he kept his spirits up

After traversing the country South to North and vice versa, Loganathan plans to go from West to East too. And we are sure that he will have the goodwill of friends, family and several other well-wishers for this journey too.