From a nursing graduate in Sivakasi to Consul General of Canada, Jayanti G's journey is the dose of inspiration you need today

The Canadian Embassy in South India recently decided to let one deserving individual become the Consul General for a day, accompanying the actual Consul General in all her duties for the day

Twenty-six-year-old Jayanthi G was in for a surprise when she got a phone call a few weeks ago. She was informed that she would get to be the Consul General of Canada for a day. 'Me? A Consul General?' - that was her first thought. But, somewhere deep down, though she always believed in herself, she never dared to dream big.

Born and brought up in a small village in Sivakasi, Jayanthi's parents were both daily wage labourers and life had never been easy. She used to attend private school initially, but had to discontinue due to financial constraints and join a government school. After completing her schooling, she had no idea what to do next. Since her parents were uneducated, they couldn't guide her well either. "That was when CCFC (Christian Children’s Fund of Canada), a child-focused international development organisation and another NGO called SPEECH conducted a career training programme in our community. They helped me analyse my aptitude and suggested that I pursue my nursing degree, so I did that for four years, and now I'm working in a private hospital in Sivakasi itself," says Jayanthi. 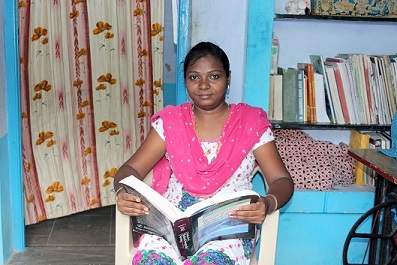 Way to go: She used to attend private school initially, but had to discontinue due to financial constraints and join a government school

The Canadian Embassy in South India recently decided to let one deserving individual become the Consul General for a day, accompanying the actual Consul General in all her duties for the day. Jayanthi was overwhelmed when she got the invitation. "When the interview for the selection of the Consul General was conducted, I attended it without expecting anything. I was so surprised when I heard that I was selected. It's a big opportunity and I'm excited about it," she says.

Jayanthi will be visiting two schools and also having lunch with the Consul General. "I'm usually very nervous about speaking in public. But I've prepared myself mentally. I'm going to talk to the kids about my own experiences and how I've overcome hurdles in life," she says.

When asked what she was preparing to speak about, he says, "There are many students in our country who feel inferior because of their background. They believe that they can never succeed in life because they don't have the same opportunities as others and they tend to give up too quickly. I want to encourage them to never stop dreaming and working towards that dream. It is possible. I'll give them my own example and how people stepped in to help when I thought they was nothing to look forward to."

In fact, that's what she looks forward to in life. "There are many children who don't have any guidance. In the future, I want to do my best to help students find their talents and choose careers that they can excel in," she says.