We're a family tissued together by words: What Kanishk Tharoor says about the Tharoors

He's not quite in the 'farrago' league, but Kanishk Tharoor also has a way with words. The writer speaks about his love for history, working on a new novel and his plans for the future

Anyone who knows anything about the literary world knows of Kanishk Tharoor and the magic he weaves with words. Having begun his long-term relationship with writing at the age of seven, Kanishk has always known that he wanted to be a writer. His words that are covered with the cobwebs of history have become a sensation across literature classrooms in the country. Last year, the former journalist released Swimmer Among the Stars, a collection of his most prized short stories from across the board. In the midst of writing his first novel, he was willing to let us pick his brain about the literature that he represents, his love of history and his hope for the future. Excerpts:

You capture a lot of voices, big and small, through your writing. Is this reflective of how you look at the world?

I've always been interested in narratives that have fallen by the wayside, stories that have been marginalised or submerged. The stories in Swimmer Among the Stars try to inhabit those worlds of loss that accompany moments of great change.

Swimmer Among the Stars has become a modern classic. Did you ever envision this for your work?

I think it's still quite early in my life as a writer and indeed, even in the life of the book (it only came out in the West a few months ago). I'm grateful for the way the book has been received, but I feel that I have a lot more writing to do and a lot more to prove to myself. Bookish charm: Kanishk's collection of short stories, Swimmer Among the Stars released in 2016

Reading Tale of the Teahouse really makes one nostalgic for a time that they've never known. Did you draw the story out of a similar sentiment?

The past feels urgent to me; it doesn't feel remote. It's something I enjoy imagining and playing with. I did grow up with romantic ideas about the Silk Road and Central Asia; of caravans, desert towns, and dusty bazaars. But that story actually came out of a Soviet film I saw over a decade ago called The Fall of Otrar. It was about the turmoil within a city as it faces the approach of a Mongol army. Tale of the Teahouse isn't much like the film, but I ventured into that mythical world and made a home within it for my fiction.

Your podcast also captures history and culture in a way that makes you experience it. What fuels your love for these themes?
That's nice to hear. Our radio series on the BBC is called Museum of Lost Objects. And some people have also suggested, jokingly of course, that I could also have called my collection of short stories by the same name.

What is your writing process like? Are you holed up in your room or is it inspired by specific experiences?

It varies, but in terms of the actual process of writing, it is - like many kinds of labour - a bit boring. I try to write industriously from home, with breaks for exercise, cooking, and spending time with family and friends.

I am interested in things, narratives, and ideas that get marginalised or lost in the shuffle of time. I care about the way the past persists into the present, even if just in smudges, dust and debris

How has your experience as a journalist affected the way you describe people and places?

I suppose it does help give the world of my fiction a different kind of breadth. I also sometimes find inspiration for stories in stories I read in the news. For example, I have a story in the collection about the United Nations being forced to flee Earth and try to administer the affairs of the planet from outer space. That was actually inspired by a tragic (and a bit farcical) news story, about the Libyan parliament fleeing to a Greek ferry in the Mediterranean Sea because it was impossible to run the war-torn country from the country itself.

Do you ever draw from personal experiences in your writing?

I typically don't write about myself in fiction. But even when I'm writing about worlds very removed from my own, bits of my own life, my own perceptions, my own feelings, my ways of thinking and seeing inevitably bleed into my fiction. 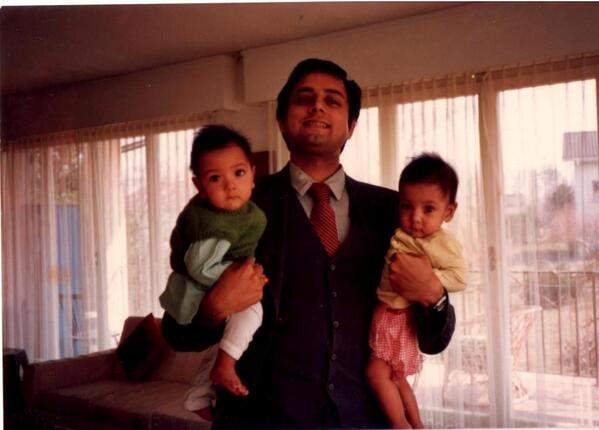 All in the genes: Kanishk credits his family of writers for being his biggest critics and support

Has your family played an important role in shaping your writing and work process?
My family has always been a strong source of support for me. My mother (a professor of literature in New York) and father are both writers and my brother is a reporter at the Washington Post, so we are a family tissued together by words. Along with my wife, who is a poet, they are all my first readers, biggest backers, and biggest critics.

Is there a favourite work of literature that has been inspirational to you?

Like most writers, I imagine that I have too many sources of inspiration to list. But in terms of books that have had an impact on me, that showed me at a tender age all the possibilities of fiction, Italo Calvino's Invisible Cities had a huge effect on me when I was a teenager.

What can we expect from you in the future? Is there a story that you have always wanted to tell?

I hope you can expect more works of fiction and maybe even some non-fiction. I find the present and the past so full of strange, wondrous subjects that I don't imagine I'll have trouble finding things to write about in the future.