Should foreigners teach us manners or is it time we start building more toilets?

Several foreign travellers and artists take it upon themselves to do their bit to clear the walls of paan stains and urine stench. But do we really need foreigners to teach us toilet etiquette?

It seems that Jackson Brown’s advice does not apply to foreign tourists visiting India as reflected in a media report published on February 11, 2018. But, first the facts.

Put off by urination and spitting on walls by Indian tourists and pilgrims in Gokarna, a town known as Kashi of the South, in coastal Karnataka, two Ukrainian tourists, Jinard and Romeo, have painted the pictures of Lord Shiva on them with the hope that people will not deface them. The town was getting ready for the nine-day Shivarathri festival for which thousands of devotees come from all over the world. The lack of toilet facility and poor civic sense had led to the spoiling of the walls.

The Ukrainian duo, who came as tourists, were appalled by the disfigured and stinky walls and decided to do something to save them. Claiming to be no artists but students of art, the Ukrainians brought paint and brushes and drew images of Lord Shiva on many walls with the hope that they will remain clean. The paintings depicted Shiva sitting on fire, his meditating posture and him in the Himalayas have attracted hundreds of tourists and pilgrims. 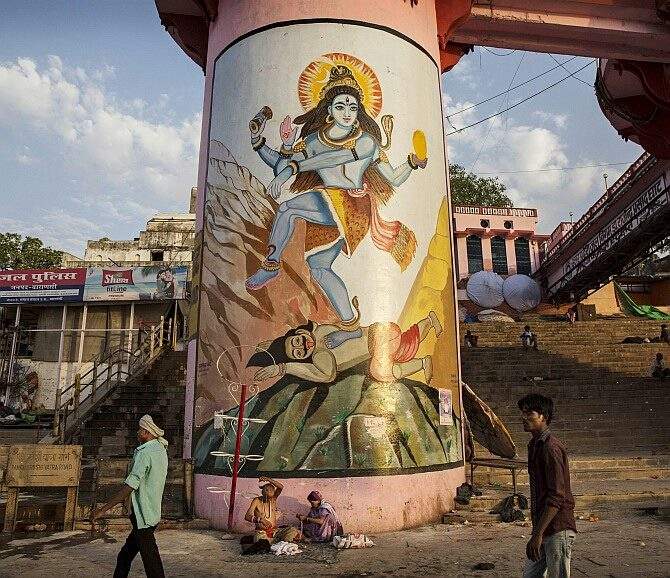 No urine: Several foreigners have taken to painting the image of deities on walls and pillars hoping the general public would be a little more respectful

But, the moves to control bowels and bladders of tourists have not borne fruit, with the first steps taken in the early 1960s, with me as an eyewitness. Hordes of tourists in buses descended on south Bombay (now Mumbai) to visit the Prince of Wales Museum and the nearby Gateway of India. Artist Ara, then known for his nude paintings, used to lounge on a charpoy in the shade of Jehangir Art Gallery and had been assailed by the site and smell of people not only urinating but also pooping on and along the boundary walls of the museum. It had wide media coverage and the nuisance abated for a while.

Others in the city resorted to painting their compound walls with similar figures of Hindu deities and symbols of other religions. In the course of time, toilets were built on the wide footpath outside the museum compound wall. Yet, with hordes of tourists from the hinterland, including north India, pouring out of long-distance buses, the footpath toilets could not cope with the situation.

But, the lesson is clear. Instead of cursing the darkness, one should light a candle. Erecting toilets to cater to the pressure of numbers is the answer. But do we need visiting foreigners to go on the high pedestal and teach us Indians toilet habits?

Sometimes, they are so naive that they end up being taught a lesson or two for their overbearing and patronising interventions, as in the following incident for which I was a witness, as laughter club anchor in the Gateway Garden.

A Japanese staying in Taj Mahal, near Gateway of India in downtown Mumbai used come to the Gateway Garden for morning walks. He could see the litter left by local visitors to the garden. He went back to the hotel, brought a plastic bag and an umbrella. He poked at the litter with the sharp end of his umbrella and gathered the litter in the bag. Some urchins joined him and they were rewarded with hundred-rupee notes. The next day the urchins brought litter themselves and spread it across the garden and were again rewarded for helping him in his cleaning mission.  After a couple of days, the Japanese “reformer” was wise to the game and stuck to his luxury hotel suite.

Finally, what the Ukrainian tourists did in Gokarna is not a first instance, with many such misadventures having taken place on the bathing and burning ghats of Varanasi.

(John B Monterio is a lecturer who drifted into writing and Journalism. He has authored three books and is the founder of the Bondel Laughter Club in Mangalore)

The subject, as projected in the title, lends itself to many views. What are yours? Your response, within 250 words, should be emailed to edexlive@gmail.com