Teachers or defecation inspectors? How Kalam's dream for teachers may be hitting the dirt

A lot of us might have seen government school teachers taking voters census in houses, and there are a lot more they have been made to do, but is that even a teacher's duty? John B Monteiro talks

Teaching is a very noble profession that shapes the character, calibre, and future of an individual. If the people remember me as a good teacher, that will be the biggest honour for me.

Now on teachers may be remembered for their record in controlling open defecation! Teachers who were once on high pedestal, as implied in Kalam’s quote, are on the way to becoming doormats to be trampled on by all and sundry. The latest in this process of degradation of their role comes from Bihar where they are being asked to prevent open defecation. But, first the facts as reported in the media and the reaction of teachers to this clumsy attempt to overload teachers with non-academic work and that, too, with degrading work of controlling the bowels and bladders in public.

According to a Bihar government order issues recently, schoolteachers in the state have the additional duty of making the rounds in urban wards and panchayats of Muzaffarpur and Aurangabad to stop people from defecating in the open and convince them to abandon the unhygienic practice. Their toilet duty is early in the mornings and evenings. They have been asked to take pictures on mobiles to shame the offenders.

The teachers were deployed as the government is pushing to meet the December 31 deadline to make Aurangabad “open defecation-free”. The administration created committees with four to five teachers in each of them to monitor the mission’s progress. 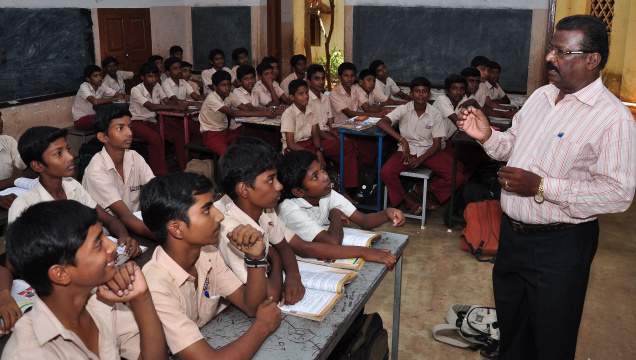 Say NO: Teachers are engaged in a host of activities such as cattle census, general census, election duties, pulse polio campaign, verification of family records, and organising social campaigns

The additional duty has put teachers of Bihar’s understaffed schools in a spot as the Class 10 and 12 finals will start in January and registration of students for these exams is not yet complete.  The latest orders to check open defecation has been sent to schools with copies to even local police stations. There are also orders linked to social reforms of chief minister such as the campaign against alcohol, child marriage and dowry that teachers are supposed to carry out.

The Bihar secondary teachers’ association has written to the chief minister, urging him not to add to the long list of non-academic work that they are supposed to do. According to the Association’s General Secretary, “At present, sent-up exams are on. Teachers and headmasters are struggling with the registration of students for board exams.  As a result, education has stopped in schools, but the authorities keep coming up with one order after another. The latest is the insulting duty of keeping tabs on villagers going out for defecation”. “Teachers are engaged in a host of activities such as cattle census, general census, election duties, pulse polio campaign, verification of family records, and organising social campaigns. When the results suffer, they are made the scapegoats,” he said, citing the Bihar government order to take action against teachers of schools that performed poorly in the 2016 board exams.

Justifying the government’s diktat, Bihar education minister has said that ‘Swachchta Abiyaan’ was a national programme and teachers being intellectuals could convince people better without affecting their normal work and that it will not come in the way of teaching.