After the Supreme Court heard a plea on Monday regarding the cancellation of Class 12 board exams and asked the Central Government to provide a decision on Thursday, June 3, it remains to be seen whether the Education Ministry will say something on June 1. "There is a broad consensus among states about conducting Class 12 board exams and an informed, collaborative decision will be taken by June 1," Union Education Minister Ramesh Pokhriyal had announced last week. Chances are, the decision will be communicated to the court first as the AG had asked for two days to submit their decision.

Students across the country have been eagerly waiting for the government's decision on this matter since the Class 10 board exams were cancelled in April. Now, the question remains whether the ministry will go ahead and announce something on June 1 or the final decision will be heard on June 3 as the SC has directed? After the SC's decision to hear the matter on Thursday, students all over social media said it is becoming extremely difficult for them to wait further. "How much longer do we have to wait? First, it was supposed to be declared by May end, then June 1 and now June 3, we are getting anxious," a student wrote on Twitter. While another wrote, "Please don't risk so many lives amid a pandemic and cancel the exams. There are many ways to promote students other than offline exams." 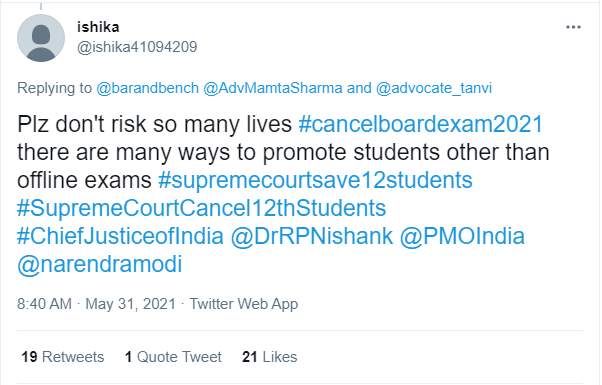 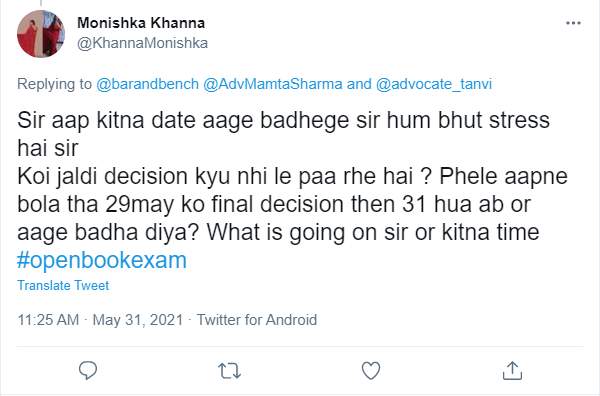 The SC on Monday was hearing a petition filed by advocate Mamta Sharma that urged the apex court to direct the authorities to scrap the exam and conceive an objective methodology to declare the Class XII results within a specific time frame. The court asked the Attorney General whether they would follow last year's decision to cancel the exams or provide good reasons to depart from that.

The SC last year on June 26, 2020, had approved the schemes of the CBSE and CISCE for cancellation of remaining board examinations scheduled from July 1 to 15, 2020, due to the COVID-19 pandemic and also approved their formula for alternative assessment. During Monday's hearing, the Attorney General told the bench, "The government will take a final decision within the next two days. We are hoping that your lordships will give us time till Thursday (June 3) so that we can come back with the final decision. The bench has posted the matter for hearing on June 3."

"List on Thursday as requested by the attorney general as the competent authority is examining all the aspects of the matter and is likely to take an in-principle decision which will be placed before the court," the bench said in response.