Unemployment Dip 2021: What can the government do to help jobless Indians?

The country has seen another spike in unemployment over the past two weeks. Even though there is no visible migrant exodus, the situation might drag on for longer. What can the government do?

The visuals of lakhs of migrant labourers trying to reach home, walking hundreds of miles while some of their friends lost their lives on the way is still fresh in all our minds. The lockdown last year might have been labelled the strictest but it showed little to no empathy to these workers. Not just them, as the country shut down for months on end, the unemployment rate rose to 27.11 per cent in the week that ended May 3, 2020, according to the data from the Centre for Monitoring Indian Economy (CMIE). But then, as the lockdown eased and the active cases dwindled, the unemployment rate came down and began hovering over 6 to 7 per cent.

This did not last long though. As the second wave of COVID hit India and several parts of the country gasped for breath, lockdowns were imposed once again and the unemployment rate has since spiked. Last week, that ended on May 23, 2021, saw an unemployment rate of 14.73 per cent. And this is why experts say that we are going to see a similar, or even worse situation this year. But what can we do to mitigate this? Where are the migrants?

But where are these people who lost jobs going? They have gone back home just like last time. Over eight lakh migrant workers left the national capital in the first four weeks of the lockdown imposed to contain the spread of the second wave of the COVID-19 pandemic, according to a report from the Delhi Transport Department. Between April 19 and May 14, a total of 8,07,032 migrant workers left Delhi for their home states in buses, out of which 3,79,604 left during the first week of the lockdown itself. "This time they had more information, the state governments helped too. Moreover, last year it was a sudden pan-India lockdown. While this year the states have phased into the lockdowns and different states locked down at different times. So the exodus was not as visible," said Dr Avinash Kumar, Assistant Professor, Centre for Informal Sector and Labour Studies, School of Social Sciences, JNU.

What can the government do?

Last year when India saw job losses and a downward sliding economy, the Modi government announced an economic stimulus. Even though it was criticised as having not been enough, they did announce a hoard of benefits for almost every section of society. This year though, the government has not announced anything yet. But what are the options they have? 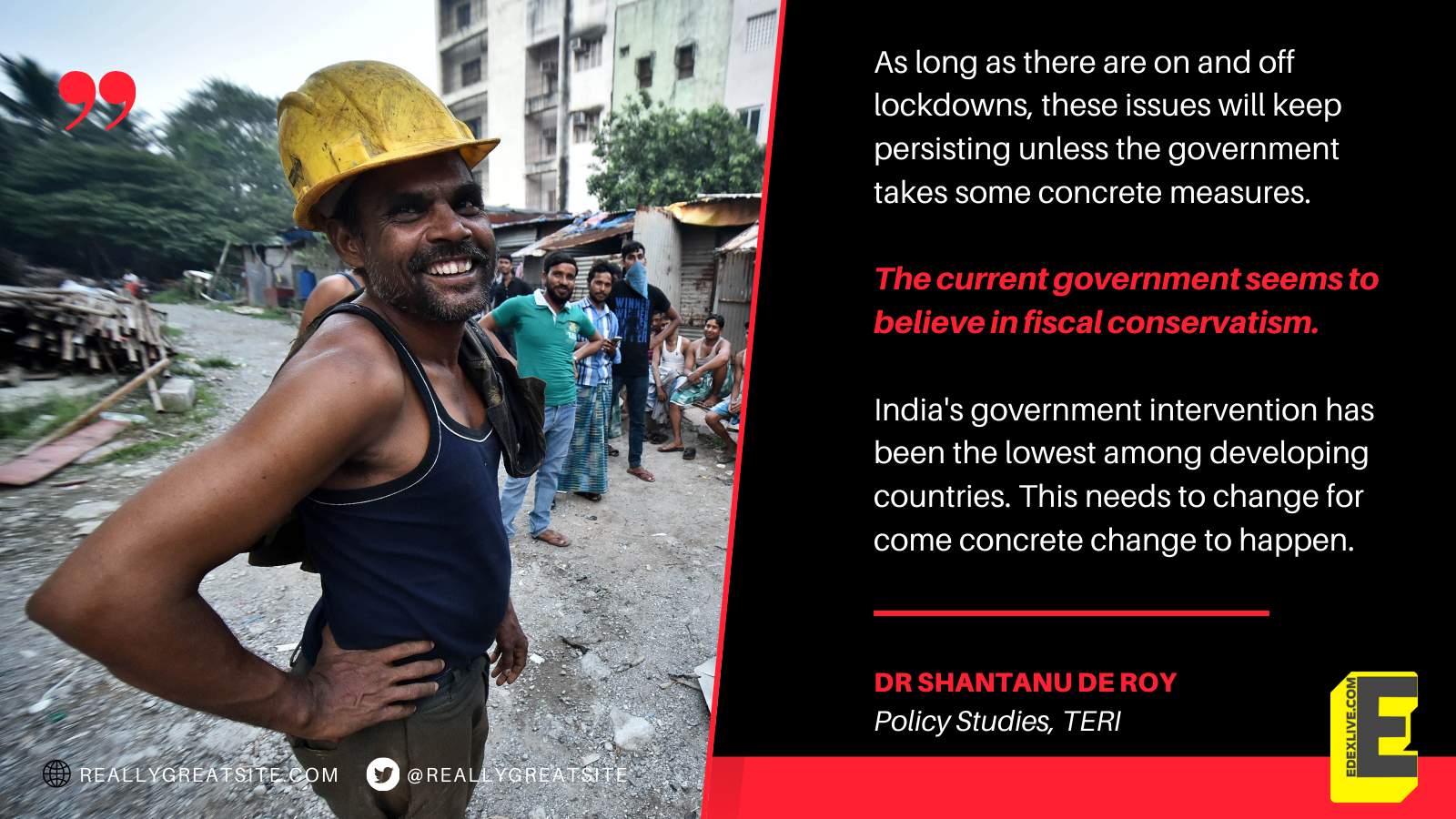 Economists have been asking the Indian government to opt for monetary transfers and have time and again stressed the fact that this was the only way to mitigate the economic issues and save people from the perils of job losses which are in millions. "This year we need it more," said Dr Kumar. The argument against pumping money into the economy was that this would lead to inflation but experts had reassured us that India had enough food grains in stock which would not let the inflation soar. Why are food grains important? In these times people do not go and buy luxury goods. The demand for basic goods and services increases and food is the first thing people would buy. "There is enough food grain stock with the Food Corporation of India (FCI). There is very little chance of general inflation if money transfers are done. There is enough to meet the demand," said Dr Saumyajit Bhattacharya, who teaches Economics at Kirori Mal College in Delhi. "Stricter rationing or even price regulation can be brought into place, obviously for a short duration, if they are scared that transferring money to people will cause inflation," he added.

READ ALSO: Survey suggests that two in five global workforce believe their job will be obsolete within 5 years

Will filling up vacancies help?

CMIE's data estimated more than 7 million job losses in April and Managing Director Mahesh Vyas recently told Bloomberg TV that the unemployment problem might not go downhill from here but it will most likely last longer than last year. And giving out cash transfers might not even cut it this time. Dr Kumar suggests a mix of both cash transfers and the implementation of a universal Public Distribution System (PDS). "But there seems to be no political will. The government can also fill up the existing vacancies at the state and central level. This in itself will not just see more people employed but also boost the economy as these new employees will be paid and they will use that money to transact, pumping money into the economy automatically. but there hasn't been any such move. The government has not even created employment in the health sector which is already reeling under tremendous pressure," he added. Can Central Vista be delayed?

India needs to have multi-pronged strategies now, said Dr Bhattacharya." "Wherever you can create jobs, you should do it. The centre should also pay back the dues owed to the state governments which will help them battle this faster," he said. The much-criticised Central Vista Project too is in focus during these tough times. While it has an estimated cost of Rs 20,000 crore, two contracts worth Rs.1339 crore have been awarded till now. But can that be delayed and focus shifted to providing aid? "It is their (government's) money and they can very well prioritise expenditure now. Instead of going for capital destruction (demolishing existing buildings), the money can be used for providing help to the people. The government had borrowed from the RBI last year and they can do it again and put it in this (aid) fund," he added. Some experts have also suggested channeling CSR funds to mitigate these issues along with increased cess for higher-income taxpayers. "That extra revenue has to go directly to the fund for helping the jobless," added Dr Bhattacharya.

What have the government done so far?

The Garib Kalyan Rojgar Abhiyaan, which the Prime Minister launched last June, could have mitigated the issues to some extent. "But the scheme was extended to only six states — Bihar, Uttar Pradesh, Madhya Pradesh, Rajasthan, Jharkhand and Odisha — while other major states were left out," said Dr Shantanu De Roy, Assistant Professor, Department of Policy Studies, TERI School of Advanced Studies. But there needs to be a more permanent solution. "As long as the virus is here and there are on and off lockdowns, these issues will keep persisting unless the government takes some concrete measures. The current government seems to believe in fiscal conservatism which advocates reduced government spending among other things. India's government intervention has been the lowest among developing countries. This needs to change for come concrete change to happen," he added. Where does Tamil Nadu stand?

Dr PG Babu, Director of the Madras Institute of Development Studies (MIDS) said that we might not still be able to gauge the extent of the livelihood loss issue across India till the end of June or early July. "As part of the Tamil Nadu Household Panel Study that we have been conducting with the Government of Tamil Nadu's Department of Economics and Statistics, there were there different pulse surveys done which show that the state was on its way back to recovery. But then the lockdown happened again and the effect of this might not be evident till the end of June or early July. It might have reflected in states like Maharashtra or Delhi which went on a lockdown earlier," he added.