In the last 30 days, this 33-year-old IAS officer has set up a plasma portal, oxygen delivery and vaccination facility

Delhi was going through the worst of times when Deputy Commissioner Abhishek Singh stepped up. He was already working relentlessly as part of the government, but Singh wanted to do more. He set up a portal — United by Blood — to connect plasma donors and those who are searching for it. But that's not it. He has also helped set up doorstep oxygen delivery via cabs and a drive-through vaccination facility.

There is no doubt that plasma donation is important. But why a plasma donor repository and not one for oxygen when Delhi was gasping for breath? "Plasma does not need manufacturing or a production setup. It's something people possess but are not being able to donate because of no proper information or a digital infrastructure being in place. People were also being cheated because of the chaos and the fraudsters who were taking advantage of the situation. There was a clutter of information on social media but no clarity on which is genuine. So we thought why not create a portal which connects the donors to the people who need plasma. Plasma has a short lifespan and you cannot store it beyond a certain point. There is also a sense of satisfaction when someone does something good like this," said Singh. The procedure is quite simple. "It's like Ola and Uber. We capture the location of the donor and the person who need plasma and then we match both according to the location and blood preference. We show 20 options at first but in case you speak to them and do not feel assured you can further expand your search. You can see plasma donors all across India, " added the civil servant.

But how are they protecting the people from fraudsters? "We have a feedback system. The calls are also monitored as they are through a third-party and the phone number of either party is not revealed. We screen the calls for unscrupulous activities and we immediately blacklist them," said Singh, a native of Uttar Pradesh and a Master's degree holder in Public Policy from Delhi University. 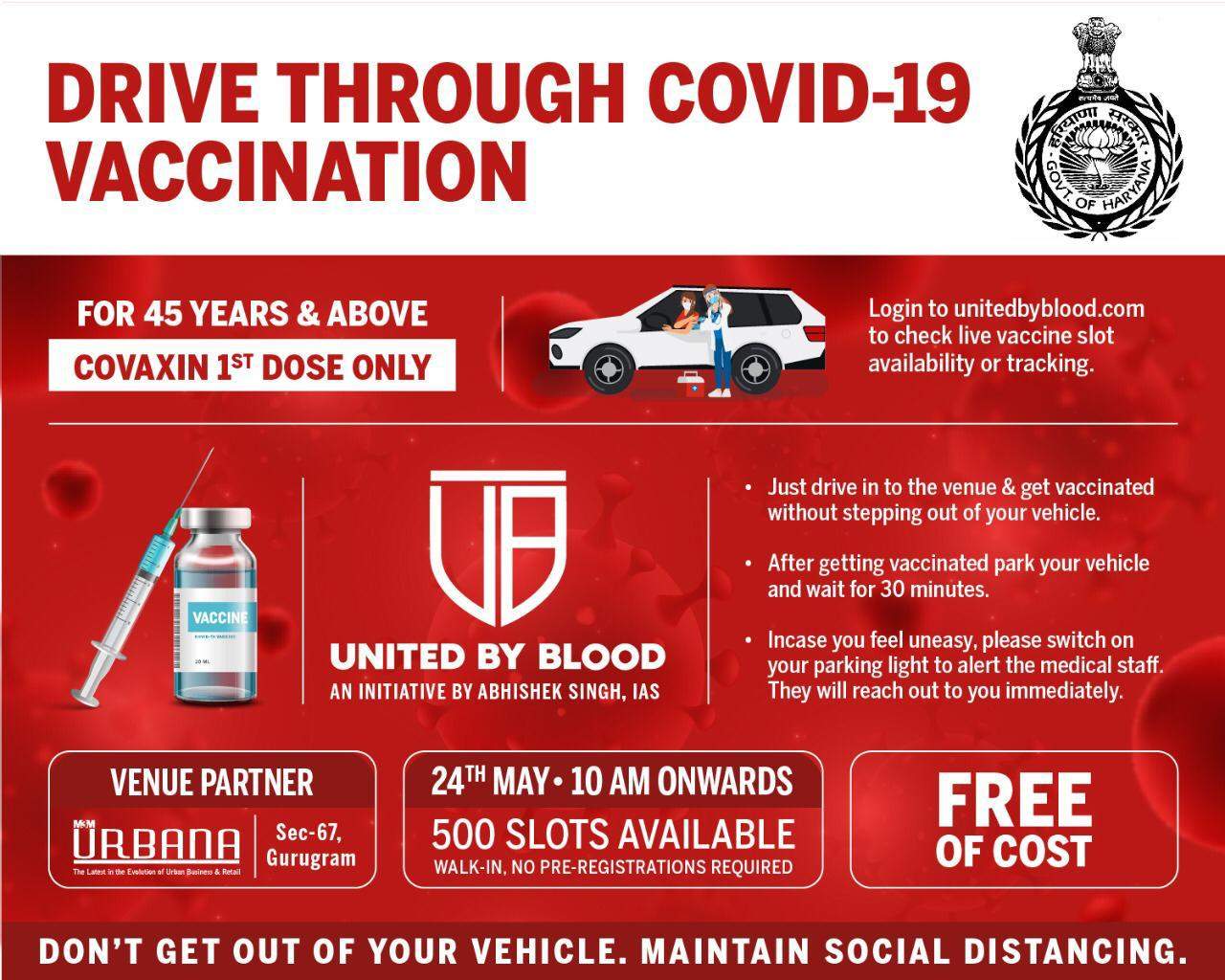 United by Blood has also been approached by Ease My Trip and PayTM who have come forward to offer vouchers to donors. "But this does not work as an incentive. Whoever is coming to donate is not doing it for a voucher. That's just a token of appreciation," he added.

Singh has also launched three Drive Through Vaccination facilities in and around Delhi — the first was at the World Square Mall in Ghaziabad. While you have to wait for vaccinations and don't know how long the queue is at the vaccination centres, United by Blood's web app will tell you how many cars are waiting and you can plan your trip to the mall depending on that. "The entire vaccination process at the centres was very time consuming. This was also in a way disincentivising them. We have offered them three things — safety, convenience and comfort," he said and explained, "You are in your own car and thus social distancing in maintained automatically. We show the number of vaccines available and number of cars in the queue — we give you all the information sitting at home before you even venture out. The process is seamless. You will be inside your car. You just have to roll down your window and get jabbed. You will have to wait for 30 minutes at a designated area before you leave," he added. While the first setup only had vaccines from the government and is administered by government officials, they also partnered with private hospitals (Fortis and Max Hospitals) to open up new facilities across Delhi — Dwarka, Saket and Model Town. Deputy Chief Minister Manish Sisodia is set to inaguarate the Saket setup on May 27.

The Oxicab initiative is delivering 100 cylinders through eight cabs from various small and medium aggregators. "It's completely free of cost but is meant for those who genuinely cannot go out and refill the cylinders," he added.

This is not Singh's first attempt at social causes though. He had set up a platform for students to provide their suggestions on government policies, called Sigma. The students have helped him with setting up the plasma repository, Oxicabs and then the vaccination facilities. Last year, the forum had also come up with a a site to match migrant labourers to employees. They are contemplating relaunching the portal.

Iqra Arshad, a third-year student of Philosophy at the Delhi University and a volunteer at United by Blood, said that it was an eye-opening experience for her. "I volunteered to maintain theirn social media posts across platforms," she said and added that being an UPSC aspirant it has been great working with Singh, who is not just an IAS officer but is also an actor and singer and is starring in Netflix's Delhi Crime Season 2.

During these dark times, a spark of hope and a shot of positivity can make all the difference in the world. That's what our new series Daily Positivity+ is all about. If you know someone who is doing their best to spread hope during this COVID pandemic, do tell us about them at edexlive@gmail.com or WhatsApp us at +91 73580 29990