How Lakshadweep's youth have grouped together to save their island

As a response to a series of laws that threaten to take their rights over the land, the students of Lakshadweep are on the offensive to protest Lakshadweep

Nasheeda Yasmin was home in Lakshwadeep’s Kavaratti Island when Praful Khoda Patel took charge as the Union Territory’s administrator on December 5 last year. A family of politicians, doctors and shipping executives for generations, the alarm bells started ringing quite early on for Nasheeda and her family. The 20-year-old third year student at Kerala Agricultural University says that the signs were instant, “We started hearing that the Standard Operating Procedure was going to be altered.”

It began with changes in quarantine procedures. For most of 2020, the island followed the most sound safety procedures. After seven days of quarantine in Kochi, residents who travelled by ship were expected to quarantine for another week in their homes or government-allocated centres. Having stood strong as a unique green zone for an entire wave of the pandemic, island locals would comfortably walk around sans masks - a sight almost unimaginable in the rest of the country. 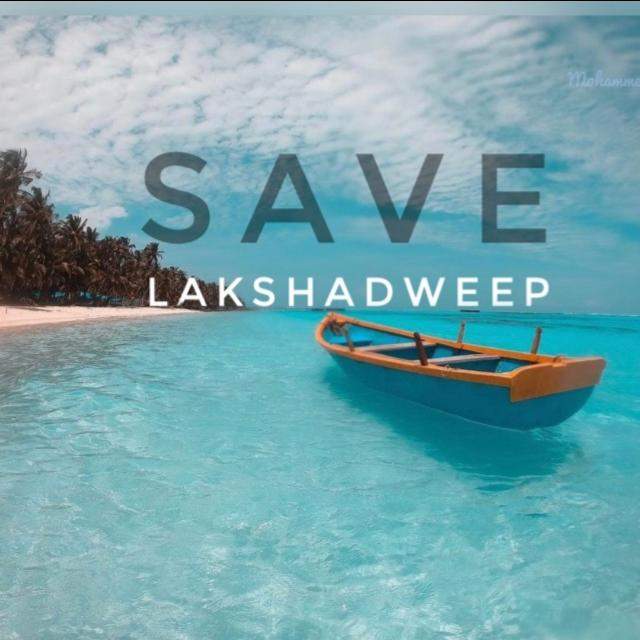 The unravelling of a pandemic

When Patel took over, the rules began to relax suspiciously. Just 48 hours after an RT-PCR test, outsiders were allowed to roam across the UT without any other safety procedures. The Administrator himself refused to be tested, news even began to spread of a medical expert being transferred for asking him to do so.

“We knew that If COVID were to spread here, it would be out of our hands,” says Nasheeda, “The entire island only spans around 32 kilometres. There are only 2 ATMs, a few small markets and a few offices, it could spread easily. So when this happened, young people on the island did voice their protest. But due to the lockdown, they were mostly online and no one outside the island really heard about what was happening.” Later, a police officer from Daman and Diu who visited the island tested positive. In January, they marked their first case of COVID and in February, the first COVID death.

Like Nasheeda, a number of students from the island, dispersed across prestigious universities and institutions in the country, began receiving frantic phone calls from home. While most uneducated residents who had spent their entire lives in the safety and comfort of the island were unable to understand the implications of the changes around them, the young islanders spotted danger as soon as the news reached them. 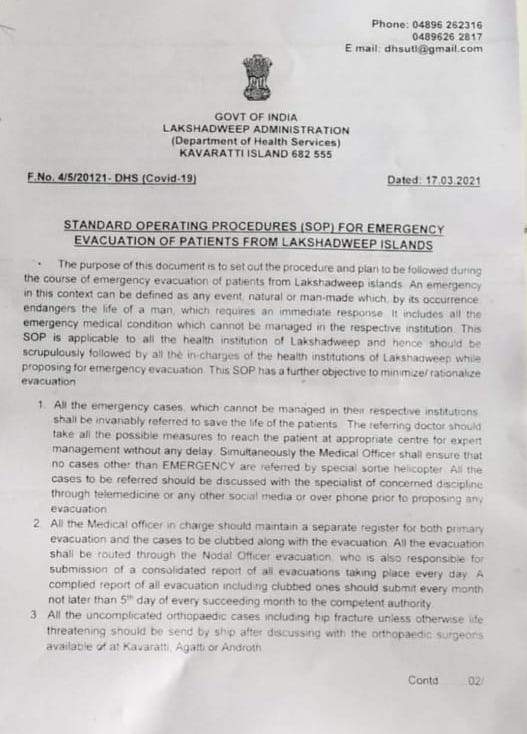 The making of a legal prison

The situation grew more dire when a slew of laws began to be introduced. From the Lakshadweep Prevention of Anti-Social Activities Regulation (Goondas Act) which could potentially imprison anyone arbitrarily for up to 12 years without trial to the Lakshadweep Development Authority Regulation (LDAR) which allows the administration to seize private property in the name of ‘development’ and changes in the Panchayat Act which has removed the authority of locally elected panchayat leaders and vested them in the hands of the administration.

JNU student Raseela PA, an Andrott Island resident, recollects being baffled by the terms they mentioned, “I would get calls from home, people were growing concerned about these changes. These drafts were written in such complicated English that even myself and other educated people from the island were not able to understand it without carefully going through it. Ordinary locals, who weren’t educated had no idea what was happening to them.” 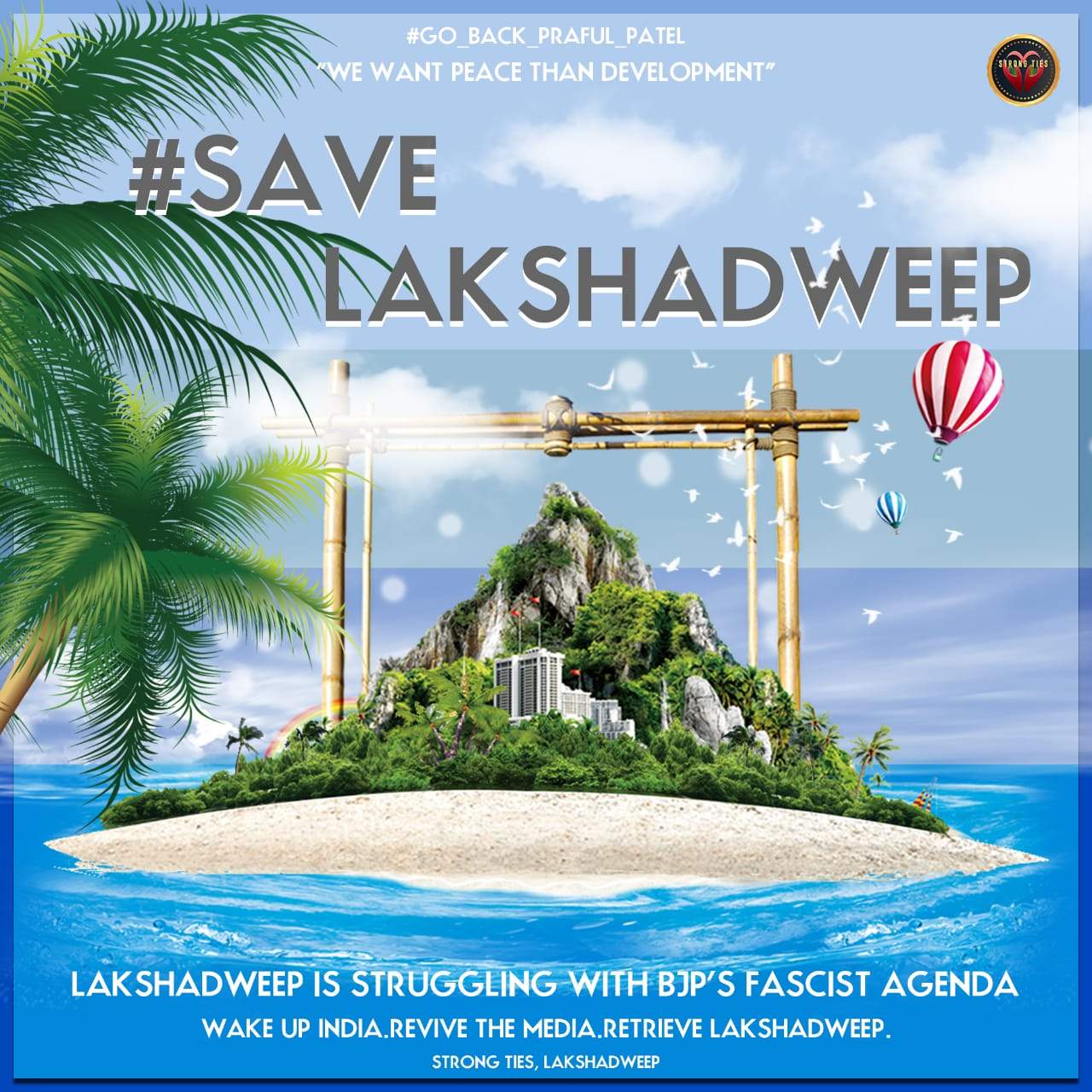 The change in quarantine norms was followed by the Animal Preservation Act. In Lakshadweep, where fruits and vegetables are not freshly available, meat is the primary source of protein. “We may have been able to understand the beef ban, it’s been happening in other parts of the country,” says Raseela, “What we could not understand was why mutton and chicken were removed from school menus. People here mainly eat what is available around us, like anywhere else in the world. We get rotten, old and inedible vegetables and fruits. Everyone knows that if you buy one kilo of mangoes, most of it would not be fit for consumption,” says Raseela.

The student, who has worked as a school teacher herself, remembers that mothers from many low-income households on the island would send their children to school hopeful that they would be able to eat healthy meals that the families themselves were not able to afford. She says, “Now, they are basically just served rice. Why are they attacking our children? I am not able to understand what the motive is here.”

“We did not know anything about Patel when he came,” says Mohammed Azeem, a student from St Paul's College Kalamassery, another Andrott Island resident. “We did some research and found that he was a politician. This is the first time that we have had a person with a political background in this post. It has always been civil servants. Then we heard from friends in Daman and Diu that he had caused a lot of issues as an Administrator there.” 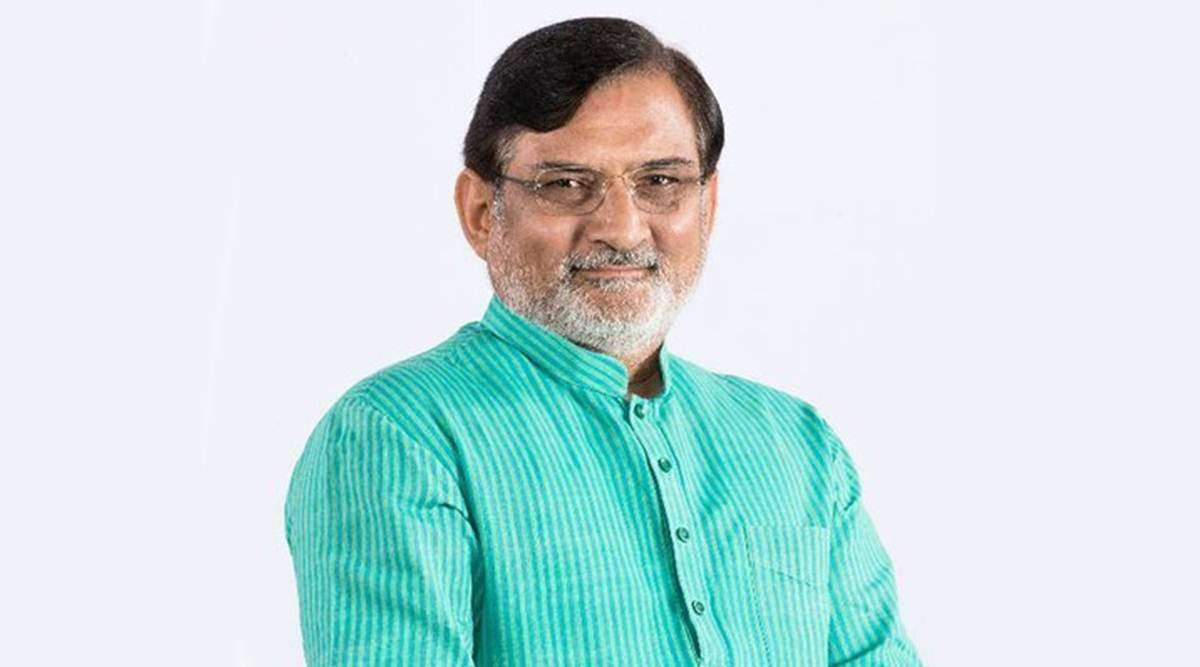 Patel, who was the Administrator of Daman and Diu had been moved to the position after the former Administrator of Lakshadweep, Dineshwar Sharma, had passed away. Azeem continues, “The laws kept coming like this. Many contract workers were fired from various departments before their period ended. More than 500 people lost their jobs. While all of this is done in the name of development, it is clearly with some agenda. Why else would they shut local dairy farms and source milk from other states?”

Lakshadweep’s roads are narrow, folding perfectly into the twists and turns of the landscape. Most roads are barely only 3 metres in width with most small islands only being 3 to 6 km long in their entirety. Plans to widen the roads are not just a threat to the locals, but the entire ecosystem of Lakshadweep. Azeem says, “To increase the width of the roads here, the intention is to create a corporate haven here. Along the lines of Singapore and other major cities. Also, the environment around it will be completely ruined. These are routes made up of corals and coconut trees. At this rate, it won’t take more than 10 years for the land to disappear.”

The people have been silenced

Due to the lack of a local media network, it took time for the news to reach the mainland. Dweep Diary, the island’s oldest online news channel was actively working to simplify the events and the information within the drafts for people to understand. When the protests gained traction, Dweep Diary and the Kerala Students’ Union’s platforms were blocked by the Telecommunications department. In addition to this, the private accounts of students who spoke up about the matter were also blocked.

Raseela mentions a report by Dweep Diary, “Schools and anganwadis have also been closed down in a region where education is extremely necessary in the name of cutting down on public expenditure. My sister is a teacher herself. Teachers working contractually under Sarva Shiksha Abhiyan were let go without being able to even complete their term citing exams in March as a reason.” 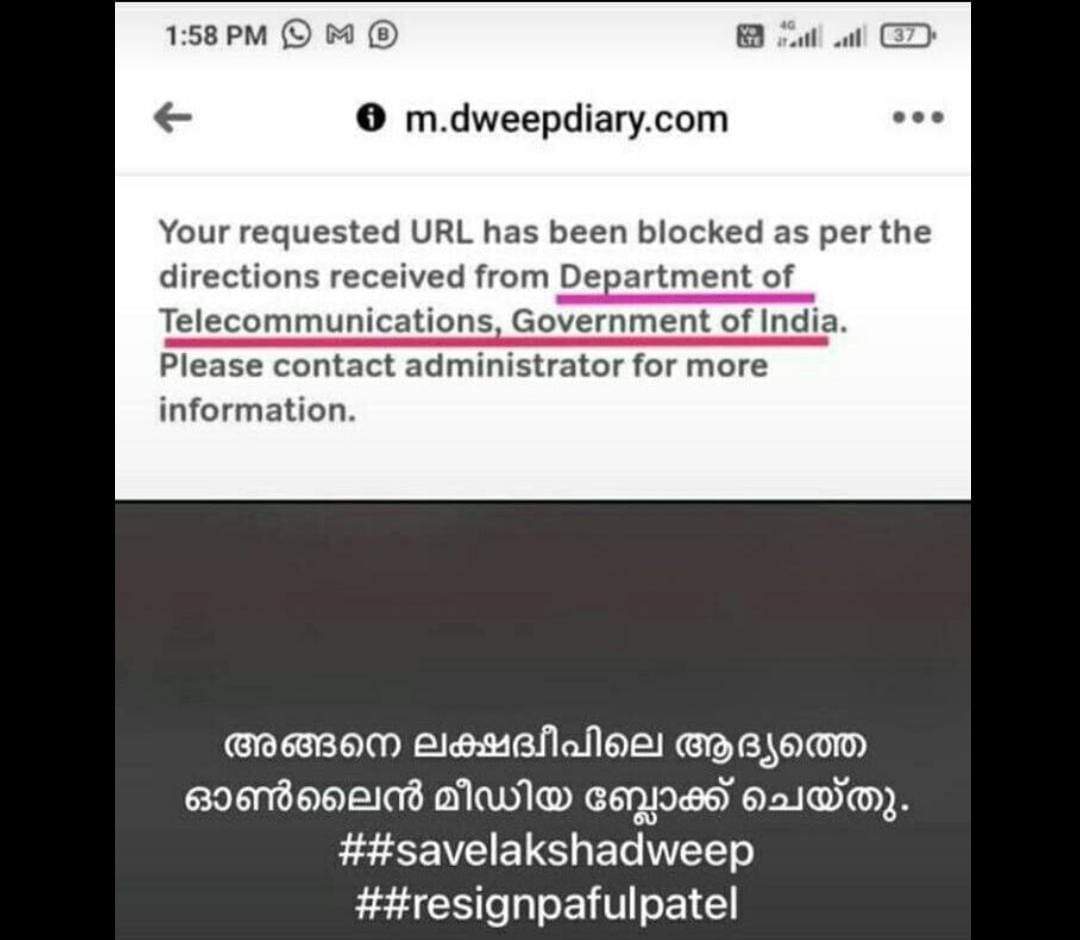 Clamp downs have been seen across industries. Word began spreading among the students that anyone who is seen protesting would be arrested and blacklisted from employment. In an area that the UN has declared to be a zero-crime region, residents are unable to understand the need for such drastic measures.

Raseela says, “Young people are afraid considering their future and fearing legal action. The people of Lakshadweep are not one to react. In all these years, the community has dealt with various threats but they say it’s okay and nod it off. They suppress their feelings expecting it to go away. It is only when something so extreme happened that they have reacted. They are at their wit’s end. If they had any option, you would not have seen this uprising.”

Over the past 4 to 5 days, responses have been flowing in. The Kerala High Court, under whose jurisdiction the UT falls, sternly said that the events unfolding in Lakshadweep were an overreach of administrative powers. Eight members of the Bharatiya Janatha Yuva Morcha who hailed from the island also unanimously resigned from the party in solidarity with the local people on May 24. With word spreading from celebrities, politicians and the national media, the students are hopeful that the tide will turn for their island. 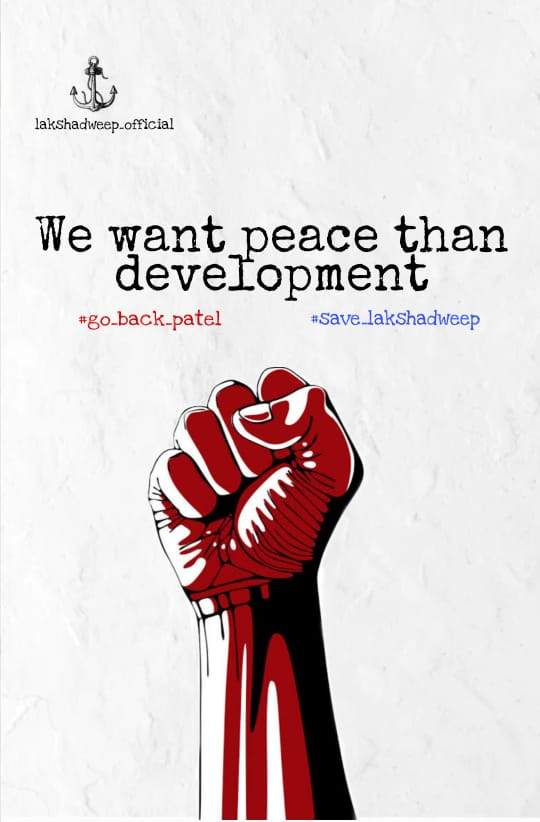 “For the people of Lakshadweep, all of this is beyond their very understanding,” says Nasheeda, “When they hear of murders and crimes in other parts of the country, they can barely comprehend them because it never happens here. These people who could not even locate the island on a map earlier have now pounced on us saying that we are a violent people and labelling us as terrorists. I am just glad that these harsh words don’t reach the older, peaceful generation who has kept Lakshadweep safe for so many years, it would break their heart.”

This younger generation understands the consequences and are determined to do everything in their power to protect their land. In the face of erratic networks and constant clampdowns, they have been working tirelessly from within the island and various parts of the country to spread awareness among the locals, most of whom do not even realise that their ancestral home is under threat.