BHU distances itself from casteist prof who commented on the competence of doctors, police assures investigation

The Banaras Hindu University has distanced itself and refused to comment on the casteist remarks made by the Dean of Social Sciences and Political Science Professor Dr Koushal Kumar Mishra on Facebook. The local police have said that ACP Bhelupur is investigating the matter after students' organisations filed an FIR against Dr Mishra.

Dr Mishra had put out a post on Facebook on May 13 stating that Indian doctors are incompetent because most of them do not become doctors for their merit but because of reservations. "WHO has said 60 per cent of Indian doctors are incompetent...now who will tell them that here one does not become a doctor based on merit but on 'Bhim Baba's Constitution'," read his post in Hindi.

The post caused a massive uproar among the students and Chandan Sagar, President of SC/ST Students’ Programme Organising Committee and secretary OBC/SC/ST/MT Sangharsh Committee (BHU) wrote to the SO of Lanka Police Station requesting him to file an FIR against Dr Mishra for propagating hate. Many students' organisation including the Democratic Students' Federation (DSF) and the Bhagat Singh Chatra Morcha (BCM) have asked for the professor's termination as well. 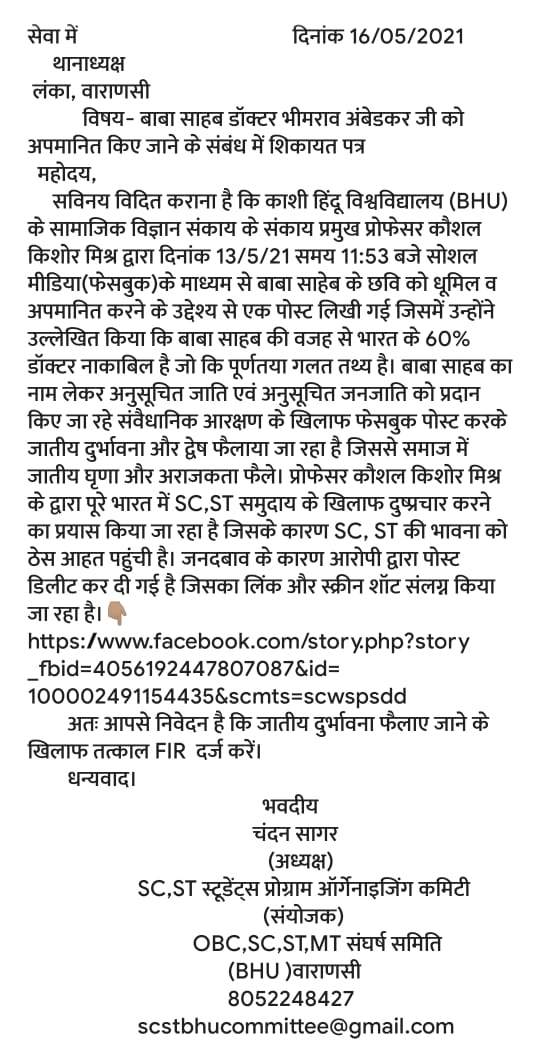 Letter to the Police

The university distanced itself from the issue and said they would not want to comment on it. "If someone writes or does something on individual capacity, I think the university should not react to it," said an official privy to the issue.

The letter by Chandan Sagar and Dr Mishra's post has been circulated on social media vehemently. The Twitter handle of DCP Kashi has diligently tweeted back to each and every appeal. "Assistant Commissioner of Police Bhelupur is investigating the case in question," the tweets read.