The Ambedkar Students Association of the University of Hyderabad has written to the National Commission for Scheduled Castes demanding an inquiry into the death of Asarelly Harshvardhan. The Master's student from the Telugu Department died by suicide on February 20 allegedly upset over being marked ‘zero’ in his attendance record for online classes.  A few days ago, the University of Hyderabad Teachers’ Association also made the same demands to the administration.

In its letter, the ASA made two major demands — the immediate return of students from marginalised communities into campus irrespective of their courses and departments, and secondly, suspension of online classes till marginalised students can access the university resources.

“The administration has been persistently apprised by the student community about the disruptive policies towards online learning. Especially about its insensitivity towards the students from marginalised communities. Being conscious of the situation that marginalised students are undergoing in this online mode of learning, the university administration has been a watchdog to various anti-student practices that have been autocratically followed by some departments,” the students wrote. 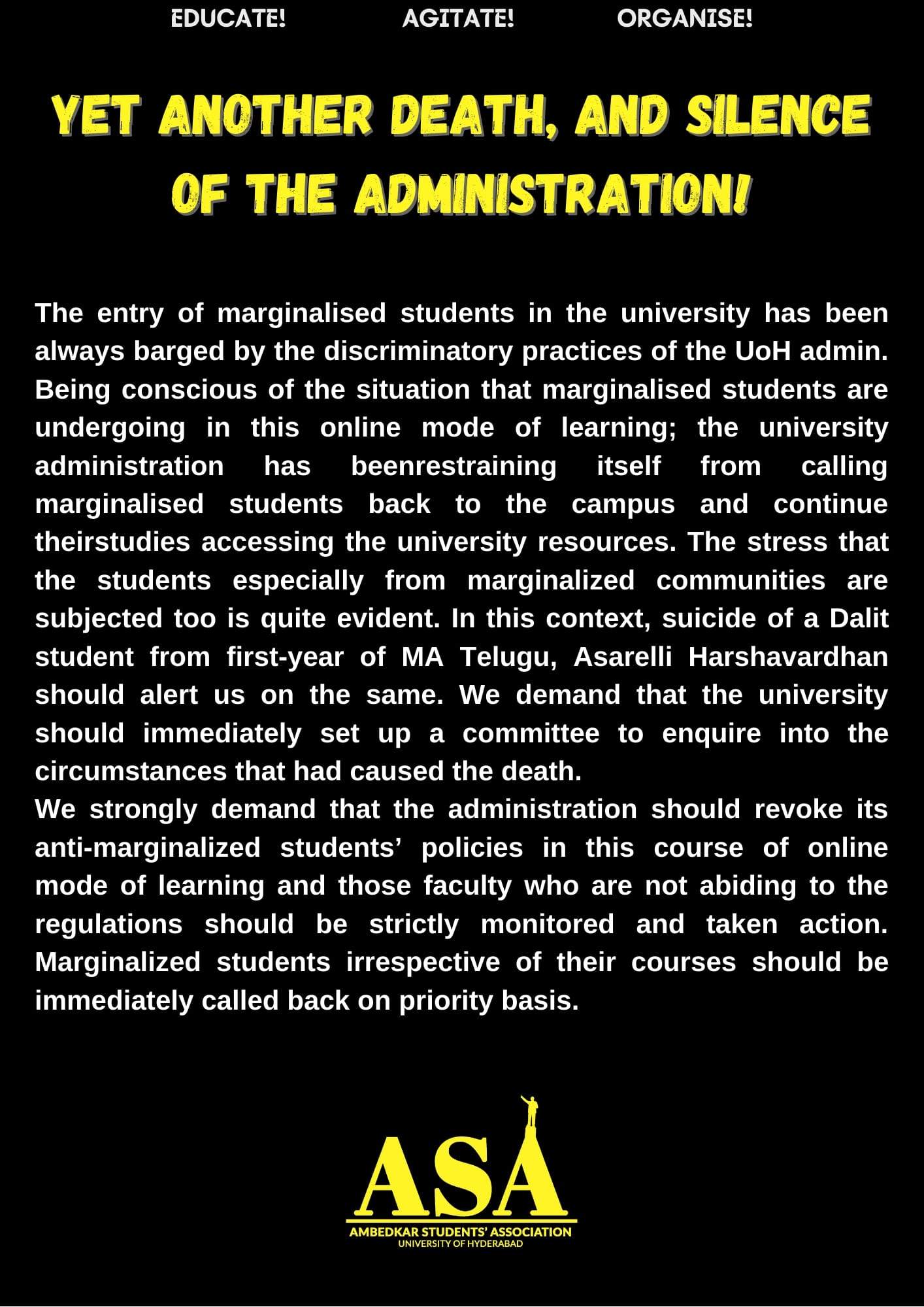 The ASA pointed out that the task force guidelines had discouraged that practice of marking attendance and questioned why the Telugu Department had been maintaining attendance in online classes. “The FIR registered in Kotapalli police station mentions the distress of Harshvardhan with respect to the poor attendance in online classes. As a newly enrolled student, who has not yet stepped into the University campus he was likely to be under-informed of the guidelines of the task force about the attendance relaxations. Here again, communication has been highly inaccessible through digital means and the approach of the faculties to stick to their autocracy has been keeping students from marginalised students to an uninformed state,” the students argued.

The ASA said that Harshvardhan, who hails from an SC community had joined the university with an aspiration to study and his hopes of an empowered future had been pushed to death, “The insensitivity of the administration and the impunity of the departments over violating the guidelines cannot be left unquestioned over the reason of lack of resources induced by his social location. The silence of the administration over his death elucidates that they have no concerns towards the Dalit students who are studying in their institution,” the ASA complained.

The ASA said they demand a thorough investigation of the 'institutional murder' of Harshvardhan, “The circumstances that led to his suicide must be probed and justice must be ensured for Harshvardhan. The commission should take this issue seriously and the commission must ensure the immediate return of students from marginalised communities to the university. Any further delay would only aggravate the problem and that would affect the students miserably. The commission must also direct the university to restrain from online classes immediately,” Iniyavan M, the President of the association said in the letter.