Having understood a once alien concept, he ruled to prohibit attempts to “medically cure” people from being queer

In April 2021, while hearing a petition, Justice Anand Venkatesh, a Madras High Court judge said something unique yet refreshing. "I want to give myself some more time to churn. Ultimately, in this case, the words must come from my heart and not from my head, and the same will not be possible if I am not fully ‘woke’ on this aspect," the judge said. He was to proclaim a judgment in a case where a lesbian couple had moved High Court seeking a direction to the police against harassment and protection from any form of threat or danger from the police.

A month and half have passed and the case was up for hearing again. The judge didn't disappoint. Having understood a once-alien concept, he ruled to prohibit attempts to “medically cure” people from what naysayers considered the LGBTQIA affliction. He also called for changes in school and university curricula and recommended awareness programmes for judicial officers, police and prison officials, so that they get 'woke' too.

While the judgment is laudable, the credit for this goes to two students from Madurai, who approached the court. The students who are in their early 20s, currently reside in Chennai and are seeking jobs. They ran away from their homes in Madurai after their respective parents opposed their relationship. Following this, their parents filed a missing persons complaint. During the hearing, the parents of both the women said that they would prefer their daughters to be celibate than being in a homosexual relationship. The students, however, said that they are "willing to wait for their parents, whom they fervently hope will understand the relationship at some future point of time." The judge and the judgement

The judgment begins by saying, "This Writ Petition has brought to light an important issue requiring de-stigmatisation and acceptance in the eyes of the society." Therefore, the court refrained from disposing it off. Justice Venkatesh talks about his own understanding of the issue, quite interestingly and in detail, in the judgment. "I personally spent some time doing some research and collecting materials to arrive at a proper understanding of this issue. It would have been possible for me to pack my order with a lot of research material and get applauded by the outside world for rendering a scholarly order. There was a call from inside which kept reminding me that if I venture into such an exercise at this stage, it will only be hypocritical of me since the order will not reveal

my true and honest feeling about this very important issue. To be open, I am also trying to break my own preconceived notions about this issue and I am in the process of evolving, and sincerely attempting to understand the feelings of the petitioners and their parents thereafter, proceed to write a detailed order on this issue," he wrote. 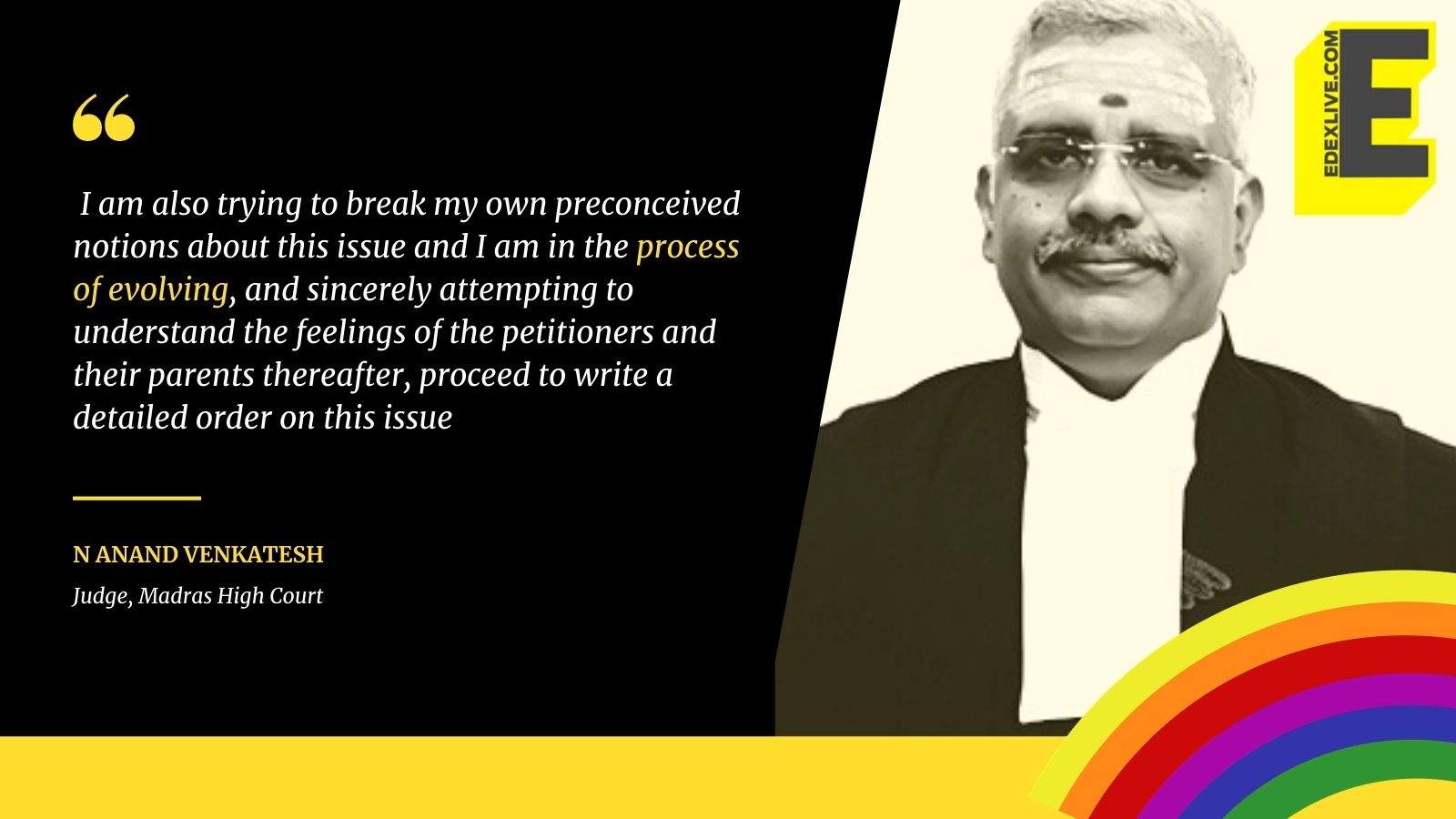 The time before the next hearing was when the judge decided to go ahead and educate himself on the subject. "For this purpose, I want to subject myself to psycho-education with Vidya Dinakaran and I would request the psychologist to fix a convenient appointment for the same," he wrote.

What happened at the counselling

The session began on April 28. The psychologist's notes were also interesting to read and tells us why there still isn't much awareness on homosexuality. "He came in with the awareness of the prejudice he holds. This was deepened by understanding how no two heterosexuals in a relationship will be judged immediately as being together only to engage in sex and it shouldn’t be different for any two people with any other orientation," Dinakaran noted. A major part of the session addressed the problematic binary understanding of sex, gender and sexuality. "He realised that there is something fundamentally misunderstood by him and part of the society. And what matters more is the well-being of the upcoming generations and work must be done for their well-being as the rigidity held by some people cannot be changed," she noted. The judge also talks about him interacting with people from the community, to know more.

Why did the judge take the effort in getting himself educated? He says, " I too belong to the majority of commoners who are yet to comprehend homosexuality completely. Ignorance is no justification for normalising any form of discrimination. Therefore, I took upon myself, the vested responsibility and the duty to deliver justice in all its forms and spirit, of cutting across personal prejudices and notions and setting forth to, at the least, educate myself lest my ignorance interfere within guiding homosexuality and the LGBTQIA+ community towards social justice." He also notes that he never got to interact with an openly homosexual person in the past.

The judgment is undoubtedly historic. And hey, it's Pride Month. We ought to be proud.