Did SRM really ask its women students to mandatorily have a boyfriend for security reasons? Here are the facts

Colleges have been known to issue the odd outrageous statement from time to time. And in an age of trial by social media, more often than not, the more ludicrous of them often become the butt of bad jokes before they are withdrawn.

But this one, involving the popular SRM Institute of Science and Technology (SRMIST) in Kattankulathur, Chennai, was downright silly — and extremely sexist, at that.

The supposed circular, which bears the crest of the deemed varsity and the credentials of its Registrar Dr N Sethuraman reads: It is mandatory for each and every female student of SRMIST KTR Campus to have a boyfriend inside the university premises. This has been done for security purposes. Those girls who are single will not be allowed to enter the premises. They will have to show a recent picture with their boyfriend to enter the campus.

It also surreptitiously bears the sign off 'Spread love'. 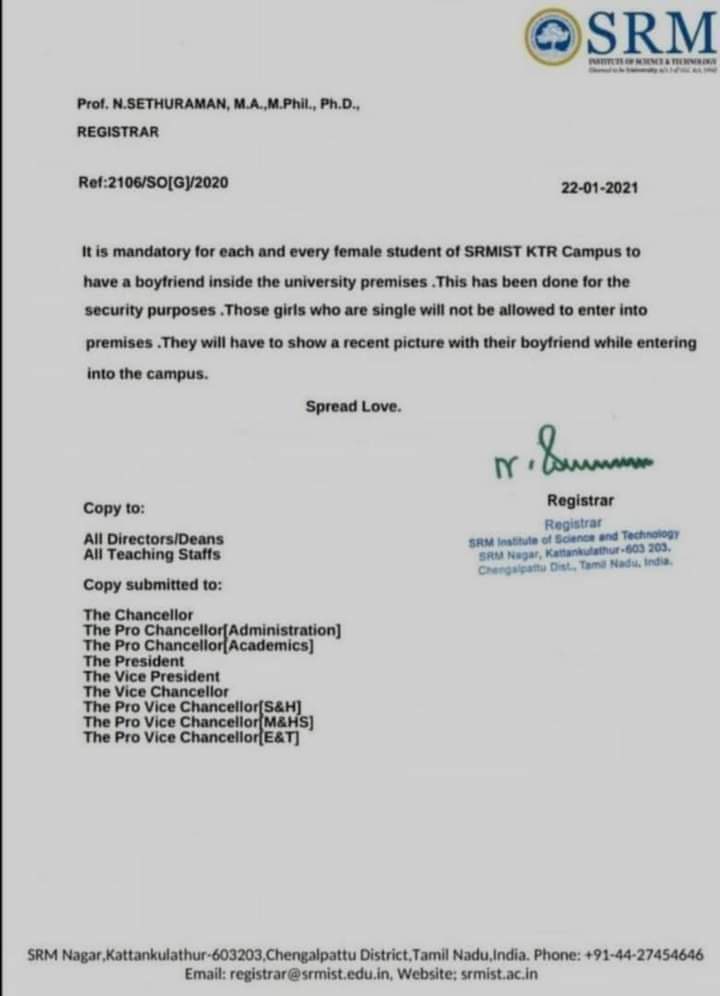 Though it bears the date January 22, 2020, the circular has really begun to go viral from January 24 and reached its zenith on Republic Day — several Twitter users who are most likely prone to uphold the morals of the pre-Victorian age trashed the institution without stopping to wonder why a varsity would
a) Put out such a silly circular
b) Do it with such poor language and punctuation
c) Do it when their reopening was still in flux owing to a global pandemic

That trial by Twitterati aside, the college authorities have swung into action and placed a complaint with the Cyber Crime Cell of the Greater Chennai Police. A message from the SRMIST's Registrar office read, "There are a couple of fake and inappropriate circulars being sent under the name and designation of SRMIST’s administration/Registrar. These circulars contain false information and spoil the image of our Institute. Henceforth, any person/student attempting to send such unauthorised letters will be dealt with firmly and expelled from the Institution."

A source at the varsity told us that most people are convinced that this is the handiwork of a student, meant merely as a malicious prank, "It is definitely a prank. It is in bad taste but I don't think there is a serious motive behind this. If a student is found to be behind this there will be serious repercussions," she said.

READ ALSO: What if you can get paid to create memes? These SRM alums created an app and they 'meme' business

Ironically, unlike most of the other engineering colleges in Tamil Nadu which have known to have a militaristic approach to keeping boys and girls apart, SRM has always been a culturally vibrant place which students have found relaxed and not too foreboding.

As is only too evident today, knocking off a document or doctoring an image is all too easy given the litany of free editing tools available to the general public — and these circulars are freely available on SRMIST's website.

What is worrisome is the content of the fake circular — which lends credence to the generally prevalent peer-driven college sentiment that you don't really amount to much/matter if you're not savvy enough to land a boyfriend. Or girlfriend.