The VC assured that he was following the Sri Lankan government’s orders and that following the backlash from across the world, they had decided to lay the foundation stones

After widespread outrage, Sri Lanka’s Jaffna University Vice-Chancellor has promised to reconstruct the Mullivaikal War Memorial, two days after demolishing it. This morning, the Vice-Chancellor laid a foundation stone at the same site as a sign of accepting the students’ demands after they had launched a hunger strike in protest.

According to reports, the students arrived at the University at 7 am but were prevented from entering the campus by the police force. However, the VC came and led the students inside the campus. He met with the students who had been on a hunger strike the last three days and promised to rebuild the memorial and urged them to break their fast. When the police force tried to stop the VC from entering, the Tamil Guardian reported him as saying, “We are not currently involved in any construction work. Let's place the stones in the place where the monument was demolished. My students have been on a hunger strike for three days. I'm in a position to end this. Do not stop us.” 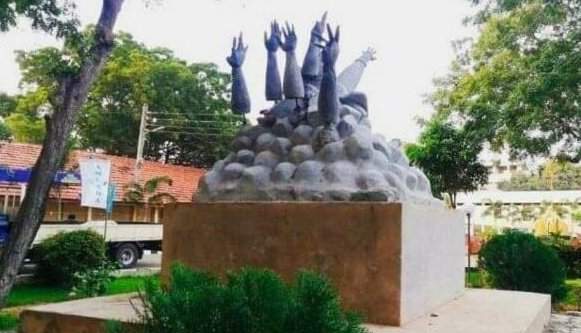 The VC assured that he was following the Sri Lankan government’s orders and that following the backlash from across the world, they had decided to lay the foundation stones. However, he said that the construction would only start with proper approval from concerned authorities. The VC along with the students laid flowers at the site. When the students were preparing to leave the campus, the police stopped them and demanded their information. When they demanded to know why, they were told that it was to do with COVID-19 protocols. However, the VC intervened and the students were allowed to leave.

The Mullivaikal massacre also known as the ‘War without Witnesses’ took place in 2009 on a tiny strip of land in Mullivaikkal, Mullaitivu. Thousands of Sri Lankan Tamils were killed in the region in the final stages of the Sri Lankan civil war. The Mullivaikkal War Memorial was built to honour the memory of the people and the students who died in the war. The memorial was demolitioned two days ago after the Sri Lankan UGC decided that it would obstruct peace between the North and South regions. The demolition led to widespread protests across the world and particularly in Tamil Nadu.