Who has moral authority to decide dance was obscene? Suspended for dancing with students, teachers of Bihar college hit back

A video of the dance went viral, but this video has been manipulated and edited conveniently by miscreants, the teachers allege

Three days ago, the principal and twelve assistant professors from Rajendra College, Chapra, Bihar were suspended for dancing to a song during an event to observe Dr Rajendra Prasad’s birth anniversary. The reason for the action was said to be ‘gross misconduct and involvement in the dance’. However, the teachers association of the college is alleging that there is miscommunication over what happened during the event. They claim that the video of them dancing had been tampered with and accused critics of unfairly terming the incident ‘obscene’.

In a statement, the Teachers’ Association of Rajendra College, Chapra said that they were issuing the statement in an attempt to offer a clarification. The teachers said that the event in question had been observed every year, “Like every preceding year,  Rajendra Jayanti was organised on December 3, in which a number of cultural programmes were presented by our students.  Our endeavour was to provide a qualitative platform for the students so that they could fare better in competitions like 'Tarang' at the university level.”

The teachers said that the after the event and the dinner session came to an end, the students and children gathered on stage for a photo, “After this, upon the enthusiastic insistence of the cultural participants, the teachers indulged their zealous requests and danced with them and other family members and children to some songs for hardly 4-5 minutes. This precise and innocuous sequence of events was captured and has been manipulated and edited conveniently to satiate the misbegotten interests of some miscreants,” the teachers claimed. 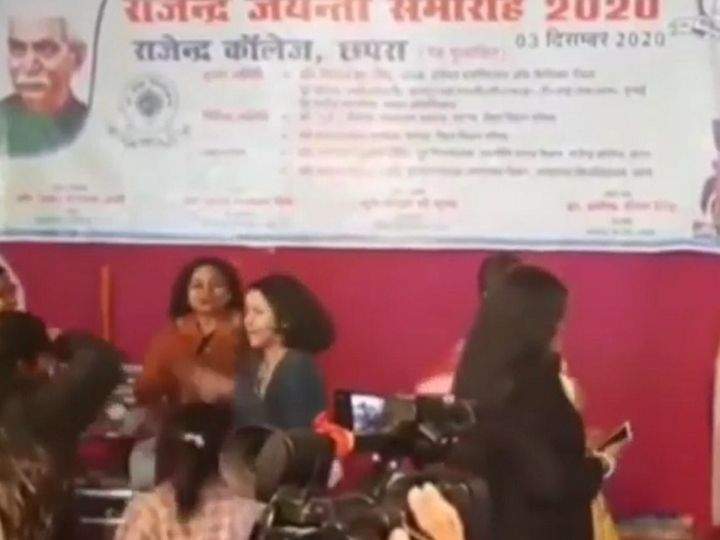 A clip of the video

The teachers explained that they had been penalised for this without even receiving a show-cause notice and they also claim that they are facing ‘double punishment’, “For this dance sequence, we teachers were penalised by having an increment and the applicable DA deducted without ever having received a written show-cause notice. Now, we have been suspended for this alleged misdemeanour. We are being punished twice for the same 'crime' which we still fail to recognize as a crime. It is being circulated in the media outlets as well as in social media that we have been suspended but no one has mentioned the fact that we have been penalized previously for this misdemeanour as well.”

The teachers also claimed that they had faced hassles while conducting events or even exams, “We (teachers) were subjected to threats, criminal intimidations and unrelenting verbal abuse from local anti-social elements. Our efforts became unpalatable to all those retrogressive miscreants who spared no opportunities to manipulate the transparent system according to their requirements. This entire incident is an unfortunate result of this retrogression, due to which the video captured was made viral to discredit our successful programme and belittle our tireless efforts.” They said that media trials had tarnished the image of the college as well as the faculty.

The teachers questioned how their activity had been categorised as obscene and pointed out that Prasad himself believed folk songs were an intrinsic part of the Indian cultural scenario, “Can a dance routine performed with family members and children be considered obscene?  Is a five-minute dance performed to celebrate the gaiety of successfully conducting the programme obscene? Are the songs composed and performed by Sapna Choudhary vulgar?  If so, who has the moral authority to decide it?”

"For this dance sequence, we teachers were penalised by having an increment and the applicable DA deducted without ever having received a written show-cause notice. Now, we have been suspended for this alleged misdemeanour"

“The fact that the boom of WhatsApp 'forwards' of this technocratic era has enabled the ruin of credibility was made painfully clear to us when we teachers were verbally abused over social media and a nauseating character assassination was propagated without any remorse or conscience. As a consequence, we have been under considerable emotional distress. Along with this, efforts are still being made to break our moral fortitude so that we do not have the willpower to nurture the academic ethics of the college environment and our attempts to strengthen the same are thwarted mercilessly,” the Association said in its statement.

Calling the reactions they’ve been receiving ‘slander’, the teachers said that miscreants cannot indulge in ‘moral policing’ and that the whole incident was just another attempt to sabotage a transparent system on campus, “We want to convey a strong and unmistakable message to those who slander us in this prurient manner so that in the times to come, these miscreants will not indulge in 'moral policing' and decide the modalities of ethical and righteous behaviour. We teachers are appealing to all of you to oppose the baseless and unjustifiable action of suspension imposed upon us,” the Association requested.