After due process and hearings, Devansh received the US Patent in September 2020 and the Indian Patent in October 2020

In an unprecedented development, an Indian law student of O.P. Jindal Global University (JGU) has received both the Indian and the US Patent for a technology he invented entitled 'Method and System for Managing the Usage of a Plurality of Battery Units to Power an Electric Vehicle. This technology aims to make the usage of electric vehicles more practical, flexible and economical in India and other developing countries. Devansh Manoj Jalan is currently pursuing his law degree at the Jindal Global Law School.

C. Raj Kumar, Founding Vice Chancellor of O.P. Jindal Global University lauded Devansh Manoj Jalan's feat and said, "At JGU, we always nurture our students to evolve into leaders with a vision for the future of our world. Typically, such achievements relating to patents are witnessed in institutions that offer STEM disciplines. However, the institutional ecosystem at JGU has enabled non-STEM students like Devansh to think out of the box and pursue innovation and entrepreneurship opportunities that transcend disciplinary boundaries.'

"It reinforces the importance of the multi-disciplinary education and nurturing of leadership talent that JGU offers, which has created transformative opportunities for its students and enabled them to create impact. This is a rather unique and extraordinary achievement and I am very proud of Devansh," he added. Hitherto known charging techniques in vehicles utilize battery swapping and plug-in charging methods to overcome issues involved with depletion in charge levels of a single battery source for power. However, these techniques have not been efficiently exploited for use in electric vehicles, owing to the size and charge capacity of battery units required by the electric vehicles(EV) for a reasonable driving range or mileage.

Besides these, there are several other charging related issues including long charging time needed presently for plug-in charging methods. There exists a need for a method and system for managing, optimizing, and charging battery units in electric vehicles in an efficient, convenient and economical manner, so that the electric vehicles are powered for long distances without experiencing a total power drain, and for efficiently charging the batteries, thus reducing the cost losses incurred. The new technology combines the advantages of both series and parallel formations. 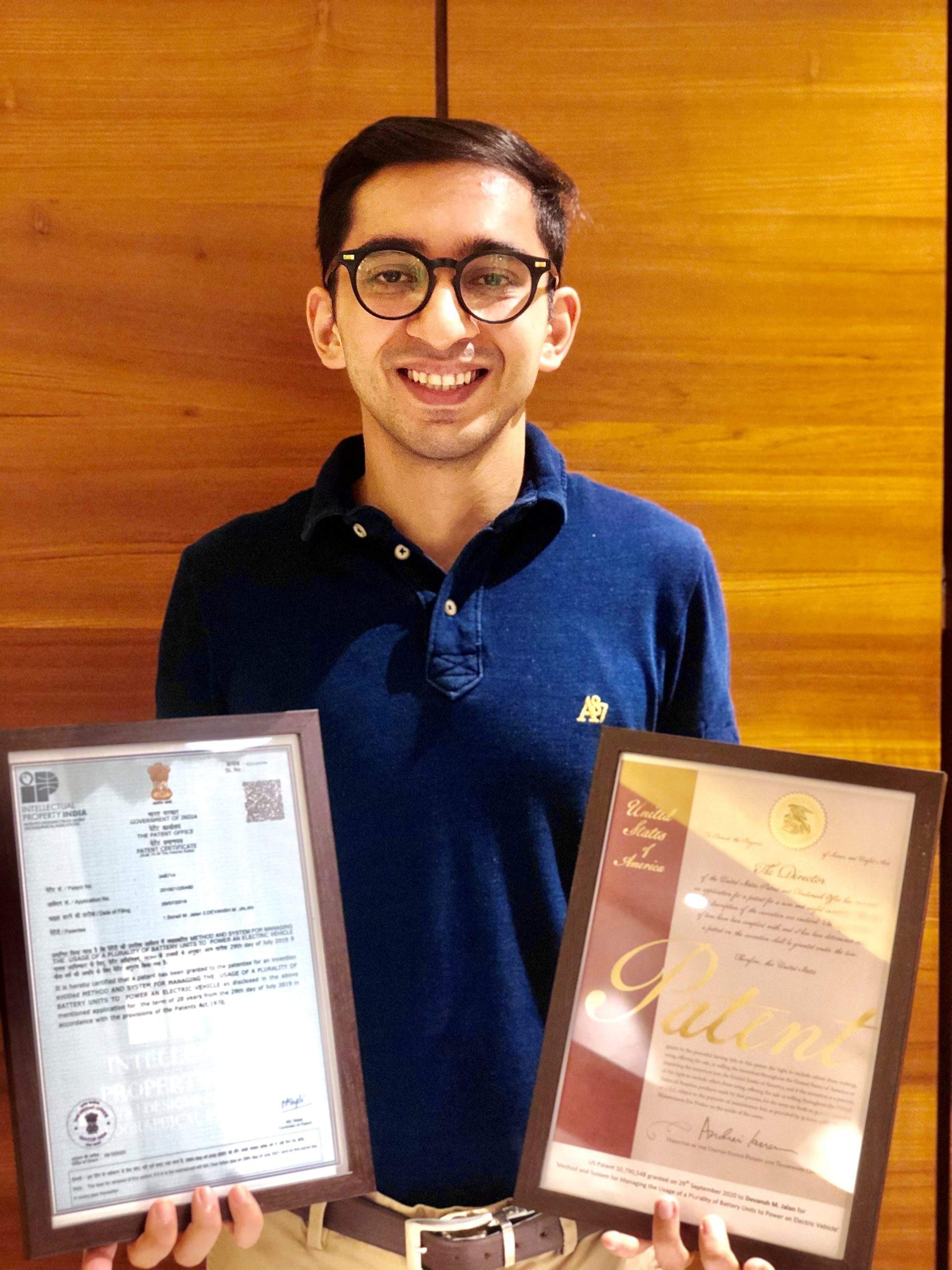 Multiple smaller and lighter battery units may be used in electric cars (and other electric vehicles) while giving the user customisable range (not available in electric cars and not practical with a parallel formation), flexible charging options (swap, plug-in or charge from a standard charger at home) and a substantially increased range gain per charge.Using multiple smaller batteries also substantially reduces the capital cost, something that makes up the main chunk of an EV's cost. This technology may also be used in smart grid systems.

Commenting on his achievement, Devansh Manoj Jalan observed, "While in the last leg of my five-year journey and taking stock of the time spent here, I am grateful that at JGU, the education I received not only has given me a strong foundation for my future, but also taught me to cogitate. Coming here from a schooling system which was more a process of learning by rote, having to churn one's mind and think beyond the confines of one's horizon was a stimulating change at JGU. Although my invention is technology based, it is the legal education, and more so the tutelage and worldliness at JGU, which has taught me to challenge the intellect'