The Mumbai Police had arrested Arnab Goswami in a case that was amicably solved earlier. This attack on press freedom and freedom of speech reminds us of the British Raj, the ABVP said in a statement

Akhil Bharatiya Vidyarthi Parishad torched the effigies of members of the Maharashtra government at Delhi University’s North Campus and Jawaharlal Nehru University in protest against the arrest of Republic Media’s Editor-in-Chief Arnab Goswami on Wednesday. The students in support of ABVP demonstrated against the attack on media’s freedom by the Maharashtra government. "ABVP believes that such motivated, vindictive and discriminatory action against a dissenting voice is tantamount to an undeclared attack on the fundamental values of Indian democracy," the right-wing student organisation said in a statement.

While protests were on at both the campuses on Wednesday, burning of effigies of members of the Maharashtra Government was also witnessed. The students condemned what they called the "shabby politics of the ruling coalition of Maharashtra that has used the state government resources to settle scores against those to democratically criticise it". 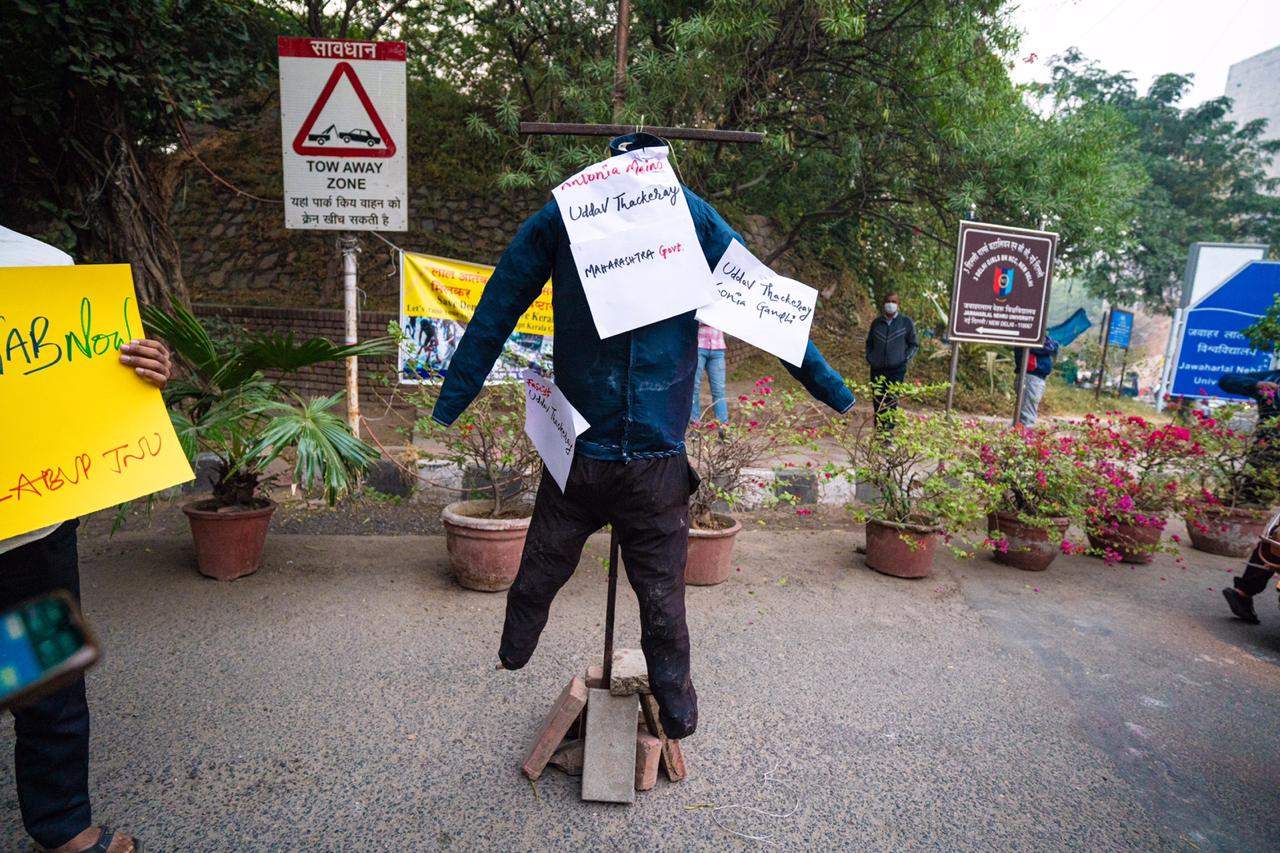 "In what became a reminiscence of the Emergency period, the  Maharashtra Government in it's latest spree of disgracing democracy has physically assaulted and manhandled journalist Arnab Goswami and his family members at his residence to solve political vendetta. The Mumbai Police also arrested Arnab Goswami in a case that was amicably solved earlier. This attack on press freedom and freedom of speech reminds us of the British Raj and cannot be tolerated," the ABVP JNU unit said in their official statement.

Shivam Chaurasia, President, ABVP-JNU said, "Our generation has never seen the period of Emergency that was imposed by Indira Gandhi, but today  attempts have been made to suppress free press through the arrest of Arnab Goswami. His arrest shows us how the state is misusing its power. He was also heckled by the police while being taken into custody from his residence. We demand immediate release of the journalist or we have plans to conduct protests nationwide."

Govind Dangi, Secretary, ABVP-JNU said, "Even the common students and citizens of JNU are voicing their protest against this act by the Maharashtra government. It is the duty of every Indian to withhold democratic rights and freedom of expression."

The National General Secretary of ABVP, Nidhi Tripathi was also present with the students during the protest at DU’s North Campus. “This is an all out attack on our fundamental freedoms. Arnab’s arrest on flimsy grounds relating to a case that was shut after meticulous investigation but was reopened only to harass and intimidate an intrepid and influential voice in the media is reminiscent of the dark days of Emergency," she added.