Only around 17 per cent of the students have devices larger than a smartphone and the majority of them do not have laptops to access online resources or sit for the exams, found the study

More than half the students in Delhi University do not have their books, class notes or reading material available with them to participate in the proposed Open Book Examination (OBE), revealed a survey conducted by the Delhi University Teachers' Association (DUTA). The survey, which had responses from 51,446 students, also said that a staggering 90 per cent of the students felt that they are "not prepared" for the exams. DU currently has an on-campus student strength that is upward of 1.30 lakh across UG and PG streams.

But why do so many students not have basic literature with them? More than 55 per cent of the students have no access to the reading materials, notes or books as they had left for the Holi break when the lockdown was announced. The students told the DUTA office bearers that they have no access to their previous notes and without it, the current study materials make no sense to them. The DUTA office bearers, in an online press conference, suggested that one overarching exam pattern for everyone might not work for this situation and asked the administration to explore alternatives which are not 'discriminatory'. 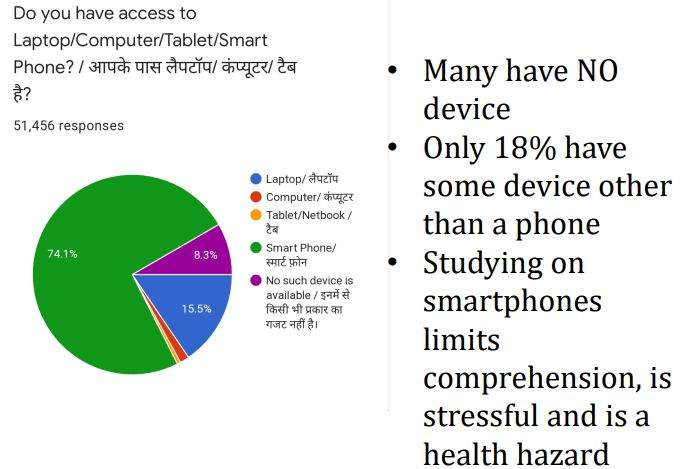 Only around 17 per cent of the students have devices larger than a smartphone and the majority of them do not have laptops to access online resources or sit for the exams, found the study. "These are times when the students are already depressed and anxious and the administration is only adding to their anxiety. One student told us that his native village has no electricity continuously. He asked for our help. There are more like him who do not have phones or e-resources to sit for the exams," said Dr Rajib Ray, President, DUTA. "We do not have a problem with supplementing formal education with online resources, but this seems to be an attempt to replace teachers in the long run," he added.

While 50.2 per cent of the students are Delhi residents, the other half come from across the country. "Only 4.1 per cent of the students live in university hostels, a major chunk, 40.4 per cent of outstation students and have limited access to resources. Since the amount and quality of teaching in the colleges have been uneven, a centralised exam is the worst way to go at this point," said DUTA Treasurer Dr Abha Dev Habib. "We need more consultation with all the parties involved in the issue — there should be a balance between previous exams and internal assessment if we are to consider the other option of marking the final year students," she added. 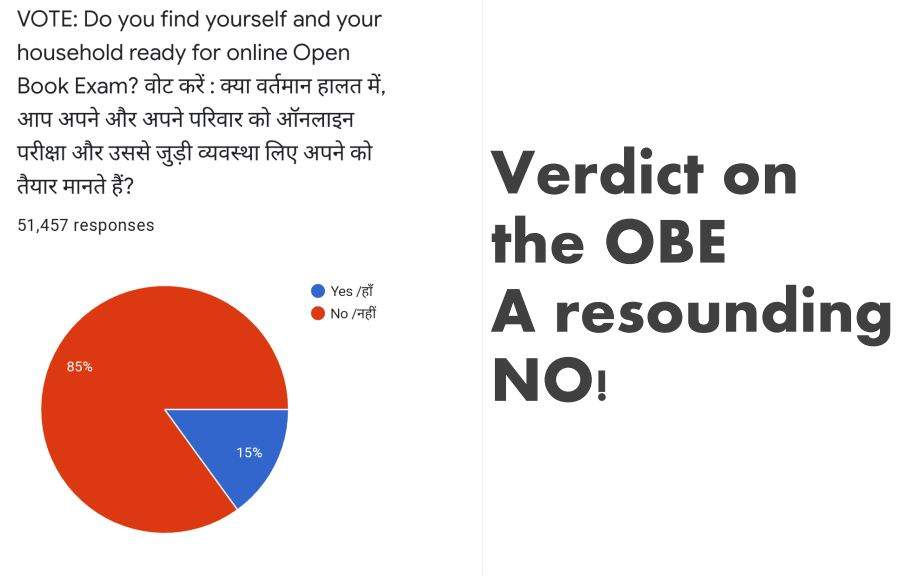 Alok Ranjan Pandey, Vice-President of DUTA said that the survey was designed keeping the students' interests in mind, "They are the ones who will take the nation forward. We need to take care of them and see to it that we can help them in any way possible." DUTA Secretary, Rajinder Singh, added that the decision was just imposed on the stakeholders without any discussion. "They did not discuss with the stakeholders. Maybe that way it would have been a better decision. They should find a new way that is helpful for all. OBE is not only problematic for the students but for the teachers as well as we are not prepared to frame questions in that manner and neither have we taught the students in a way that will help them in an OBE format," he added.