Cyclone Amphan is gathering momentum to become the strongest storm on record in the Bay of Bengal with sustained wind speeds of 270 km per hour, making it stronger than the 1999 super cyclone and the joint strongest on record in the North Indian Ocean. It has a link with climate change, experts said on Tuesday. Amphan intensified from a category I cyclone to category V in a short span of 18 hours. Studies say human activities may have influenced Amphan in several ways.

Climate change is increasing the damage that cyclones cause in many ways, including increasing sea surface temperatures that raise the maximum potential energy that a storm can reach; increasing the rainfall that drops during the storm; rising sea levels, which increases the distance inland that storm surges reach; and causing storms to gain strength more quickly.

Scientists are discovering a complex relationship between air pollution and cyclones and it is possible that reductions in air pollution in the region, due to the Covid-19 restrictions, may have influenced Cyclone Amphan. Although they agree this requires further investigation. Aerosols, from human-caused air pollution, can partly reduce the strength of cyclones in various ways. 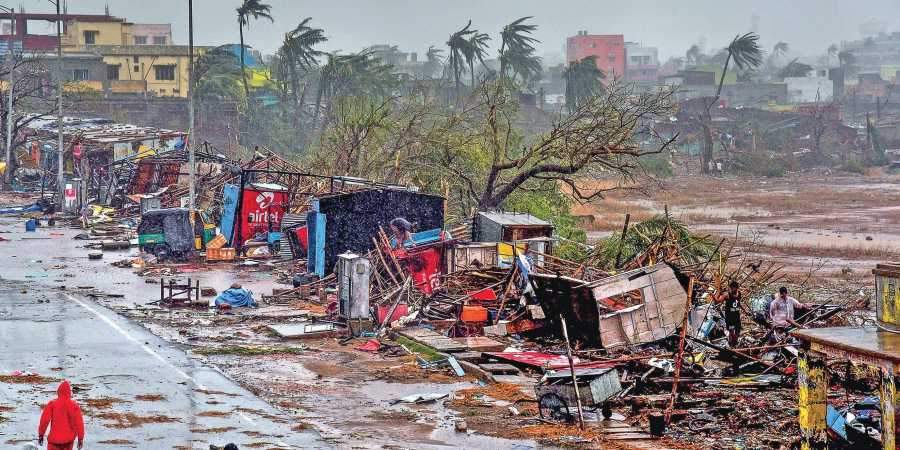 One factor is that aerosols reduce the amount of sunlight reaching the earth's surface, cooling it slightly. Reductions in air pollution may have slightly increased sea surface temperatures in the Bay of Bengal, adding to the effect of climate change. In addition, aerosols can make clouds produce rain more easily, which limits the formation of cyclones. These factors suggest that reductions in air pollution would tend to increase cyclone strength.

So while there may be a relationship between the reduction in air pollution, due to the Covid-19 restrictions, and Cyclone Amphan, it is too soon to say exactly what influence cleaner air has had on the storm.

Roxy Mathew Koll, a scientist with the Indian Institute of Tropical Meteorology and lead author of the United Nations' Intergovernmental Panel on Climate Change (IPCC) oceans and cryosphere, said: "Our research shows that high ocean temperatures are conducive for rapid intensification of cyclones in the North Indian Ocean. "In the current case, the Bay of Bengal has been particularly warm, which may have had some role in the rapid intensification from a depression to a cyclone and then to a super cyclone in a very short time. For example, some of the buoys in the Bay of Bengal registered maximum surface temperatures of 32-34 degrees Celsius consecutively, for the first two weeks of May. These are record temperatures driven by climate change we have never seen such high values until now," he said. Koll said these high temperatures could supercharge a cyclone since tropical cyclones primarily draw their energy from evaporation at the ocean surface. V Vinoj, Assistant Professor with the School of Earth, Ocean and Climate Sciences at the Indian Institute of Technology in Bhubaneswar, said global warming is leading to an increase in the heat content of the upper oceans around the globe.

"This is also true for the oceanic regions around the Indian region. This is one of the causes of the increasing number of cyclonic activities in our region during pre-monsoon times. However, what is different now than the past is the world's largest Covid-19 lockdown in the south Asian region led by India.

"This lockdown has significantly reduced human emissions into the atmosphere. This decrease means that surface warming due to the removal of human-made aerosols has increased and atmospheric warming (due to those absorbing aerosols such as black carbon) has decreased significantly during this time," he said. "This surface warming extends over the waters in the Bay of Bengal. Therefore, the global warming effect which tends to increase the strength of cyclones, if any, is now amplified due to this human-induced lockdown effect. This may be the reason why Amphan has strengthened into a super cyclone, a second one only to the 1999 super cyclone," Vinoj said in a statement.

"Overall, I feel lockdown may have strengthened this cyclone due to the additional warming of the ocean waters over the Bay of Bengal. This will need to be investigated in the future," he added.