Soon after a circular was issued on June 16 stated that the Pondicherry University exams for final semester students stood cancelled but the exam fees were not waived, on Thursday the Puducherry Government's Directorate of Higher and Technical Education issued a circular requesting the varsity administration to cancel the examination fees. The department also recommended that the PU administration communicate the same to all the government and private higher education institutes in the Union Territory.

The circular comes a day after the Education Minister chaired a video conference with all the stakeholders more specifically heads of institutions, teachers. students, parents and the general public on Wednesday.
The circular reads, "During the meeting. the stakeholders raised the issue of waiver of examination fees for the semester/terminal examinations of even semester [sic] of the Academic Year 2019-20. Since the same was cancelled by the Pondicherry University, the subject matter was discussed and it has been decided to recommend to the university to communicate all the Government and Private Higher Education Institutions in the UT of Puducherry, to refund the examination fees that were already paid by the students or to adjust the remitted amount for the next Academic Year's examination fee, whichever is applicable." 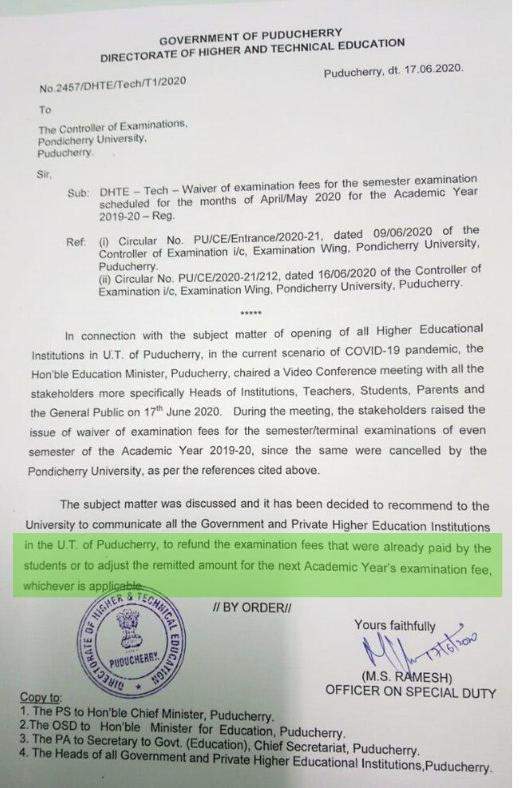 However, the students still remain perplexed as the last date for the submission of examination fees is June 30 while they wait for the university to announce a waiver officially. Colleges typically collect exam fees for the usage of the expenses incurred by arrangements, stationery and supervising teachers — most of which won't be needed at a time like this when the examinations have been completely cancelled. "Not just students of PU but colleges affiliated to the central university across the Union Territory are in a fix about this decision. Student organisations and others who were present at the video conference with the Education Minister had expressed their concerns during the meeting. The Students' Federation of India (SFI) in Puducherry had also sent a written representation around the first week of June asking for a waiver of the exam fees in the affiliated colleges. But we still have to wait for an announcement from the university — if they will be in favour of students or not," says Anand Anbazhagan, President, Democratic Youth Federation of India (DYFI) Puducherry and former SFI committee member.

The Pondicherry University Students' Council (PUSC) had also sent a separate letter on June 16 to the varsity administration asking for the fee waiver following the release of the circular stating the cancellation of exams. "In the absence of exams, asking for the examination fee is a completely baseless demand. Moreover, in this time of crises when people are facing serious financial issues, to ask them for the fees is very insensitive. Students' Council requests the University administration to rework the previous directive, and ensure that students don't have to pay the examination fee. That will be the next and crucial step towards building a pro-student and empathetic university," the PUSC letter reads.

Speaking to Edex about the new circular from the state government, PUSC President P Parichay Yadav says, "The government's recommendation is in favour of the students and the pressure created on the administration for the removal of fees is a move worth appreciating. We have been waiting for a response from the university administration. We are continuing to follow up about it as the last date is June 30 and there's a lot of confusion among students. Let's now wait and see what they have to say."