None of the Bollywood biggies — Amitabh Bachchans, Salman Khan, Shah Rukh Khan and Aamir Khan, among others — have reacted to the ongoing protests

Actor Deepika Padukone on Tuesday reached the Jawaharlal Nehru University in New Delhi in solidarity with the students, following Sunday's campus violence. The actor was spotted standing with the students at the Sabarmati T-point, where a public meeting was called by the alumni of JNU over Sunday's violence in the varsity.

She also met JNUSU President Aishe Ghosh who was injured in the violence. Padukone did not address the meeting and left after an hour. The meet was also attended by former JNU students like Sitaram Yechury, Kanhaiya Kumar, D Raja and Yogendra Yadav.

The actor and former JNUSU president Kanhaiya Kumar reached JNU and they were standing in support of JNU students. 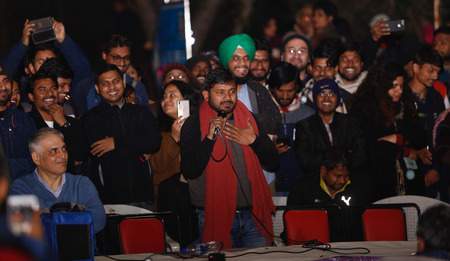 On Monday night, a slew of Bollywood celebrities including directors Vishal Bhardwaj, Anurag Kashyap, Zoya Akhtar and actors Taapsee Pannu and Richa Chadha turned up at Carter Road in Mumbai to voice solidarity with those protesting against the violence at the JNU. In a peaceful gathering of hundreds, the film fraternity was at the forefront with prominent personalities, including actors Swara Bhasker, Dia Mirza and Ali Fazal as well as Sudhir Mishra, Anubhav Sinha, Rahul Dholakia and Neeraj Ghaywan. But none of the Bollywood biggies — Amitabh Bachchan, Salman Khan, Shah Rukh Khan and Aamir Khan, among others — have reacted to the ongoing protests.

The violence meted out within the university's campus has triggered massive outrage in the country with demonstrations and protests taking place all over in support of the JNU students who were thrashed. Aishe Ghosh, the JNUSU president, the JNUSU general secretary and 30 other students and faculty members were injured in the violence.

On Sunday evening, a mob of masked young people that reportedly had both men and women sneaked into the university campus and stormed the hostels and allegedly targeted students in a planned manner.