Santwan Chattopadhyay, a professor at the mass communication department of the Jadavpur University, had put up a Facebook status condemning alleged attacks on his colleague Doyeeta Majumder and two of his students, Pinaki Dhole and Rahi Halder. He received a message from a BJP member asking him to keep in mind that "times will change". Santwan reported the 'threatening message' to the Kolkata Police's cyber crime division. 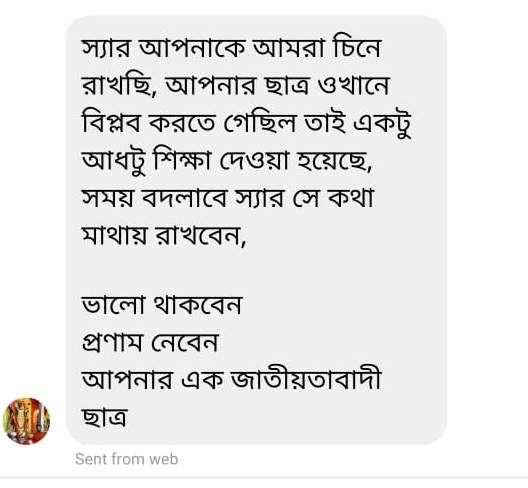 Santwan said that he had posted the message after he got to know that Pinaki was beaten up. "Two people might not agree on a particular issue but that does not mean that we will become intolerant and threaten other people. I do not know him (Partha), personally or otherwise," he said. "I have no problem having a civil discussion about anything with anyone. But we need to be more tolerant. I had not named any organisation or individual. But this person took it upon himself to threaten me," he added.

When we spoke to Partha, not only did he accept that he had sent the message but also added that he meant no threat. "I have not used one bad word in my message. I have said that his students went there to strike up a revolution, it depends on him how he takes it. I said that we taught him a lesson. He (Santwan) as a teacher gives wrong lessons and instigates people to hate the Prime Minister and we just taught the student that he should not disrupt a peaceful gathering. I also said that times will change, and it will — we will form government here soon. He is using his power as a professor to influence people now — when we come to power we will be in the government's chair," said Partha. "His students came and vandalised our stage after the meeting ended. They tore our placards and chanted slogans of Azadi on the same stage. Is that not violence?" he added. He also shared pictures, allegedly from that night where two individuals with red flags in hand can be seen vandalising a stage — whether they were students of the varsity could not be confirmed.

Partha said he is determined in his mission to identify the "urban naxals" who are disrupting the "peace of our country". The BJP member was on his way to the party office to decide further steps when we spoke to him.