Even as cops take over campus, Pondy varsity students sit on 19th day of protest

Just as the students of Pondicherry University were getting ready for their 19th day of protest, they were surprised by a flood of CRPF personnel on campus. In two days, the Vice President will be arriving for the University's convocation and matters on campus continue to be intense between the protesting students and the administration.

The students have been protesting over the last two weeks against the 200 percent increase in fees for students in various courses. A few days ago, the administration had proposed to reduce the fees by 20 percent for students from economically backward backgrounds but had not clarified to the Students Union how they would determine which students deserve this cut. They also said that a mere 20 percent reduction cannot be accepted when the hike itself was 200 percent. 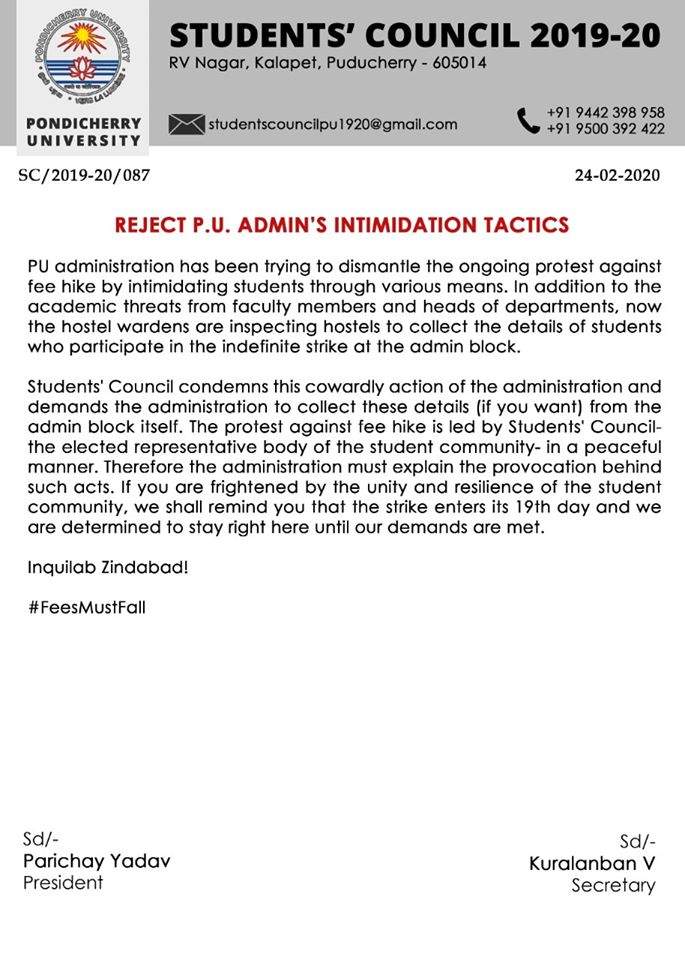 "They called us for another interaction on Saturday and we expected them to give us a better offer but they only reiterated what they had already said. They wanted us to reconsider the same thing again. So we had no choice but to continue the protest," Students Union President Parichay Yadav said. The student leader also said that the administration was expected to have a meeting today and get back to the Union later in the day. "We feel that since the convocation is in two days, the administration might consider accepting our demands because they would not want the protests to take place when the VP is here," he added.

Since examinations are going on, the students are finishing the exams and only then joining in with the protesters. But the students are planning on intensifying the protests over the next two days. "The CRPF and the local police have taken over the campus, almost 300-400 are here and we are worried that they might detain us forcefully. But we will continue our protests till the administration decides to accept our demands for the complete revocation of the fee hike," he added.

However, the management has been trying to curb the protests though, "The administration has been trying to dismantle the protests by intimidation students through various means including academic threats from faculty members and heads of departments.  Now the hostel wardens are inspecting hostels to collect the details of the student protesters," the Student Union claimed in a statement. They also added that if the administration did want to collect details then they should do so, while the students are protesting and not when they are in their hostels.

The administration has already issued a circular to the Union prohibiting students from assembling 'unnecessarily' and that the police would be taking over the campus. They have also urged them to 'cooperate' with the police.