People won't always like every trait of your personality, doesn't mean you have to change: Tahira Kashyap

Audiences and people are very fickle, they might like one trait of your personality and not the other. But that doesn’t mean that you should tweak yourself according to them, says Tahira Kashyap Khurrana, author of the bestseller The 12 Commandments of Being a Woman. "I have realised that the problem is with the trolls and not with me. However, even though it does feel wonderful to hear people say nice things about you, you can’t take it too seriously as the people who are validating, don’t know you," adds I've Never Been (Un)Happier author Shaheen Bhatt. The duo, who have approximately 700,000 followers on Instagram between them, were in conversation with Daniel Thimmayya, Chief Reporter, Edex as part of the Dakshin Literary Festival on The New Indian Express' webcast e-expressions.

Continuing her take her trolls on social media, Shaheen adds, "The stuff that I have been trolled about on social media has been so horrible and disconnected from me as a person. People have said a lot of chauvinistic and regressive things. Whenever I have spoken about mental health, people have reacted sensitively but there will always be those who won't." Shaheen published her tell-all account of her battle with depression in her book last year. But was it difficult for her? "It wasn't difficult being open about it. I'm quite used to being transparent with what I am going through. I wasn’t hiding it but I hadn’t yet come out on a public platform and talked about depression. The process of writing it was hard as it meant going back to some really dark places that I didn’t want to go back to. I had to not only go back but also find insight in that," Shaheen adds.

Speaking about whether social media affects her writing process, Tahira says, "I have made a conscious decision to not let it overpower me. What you need to realise is that everyone on social media is a human being who is bound to have failures even though they post the best part of their day. Use social media to spread some awareness but even if someone is just posting good pictures, it must be understood that hours and hours of makeup, preparation and thinking about what content to put up has gone behind it. Just don't take yourself or anyone else too seriously on social media, it is just a platform." 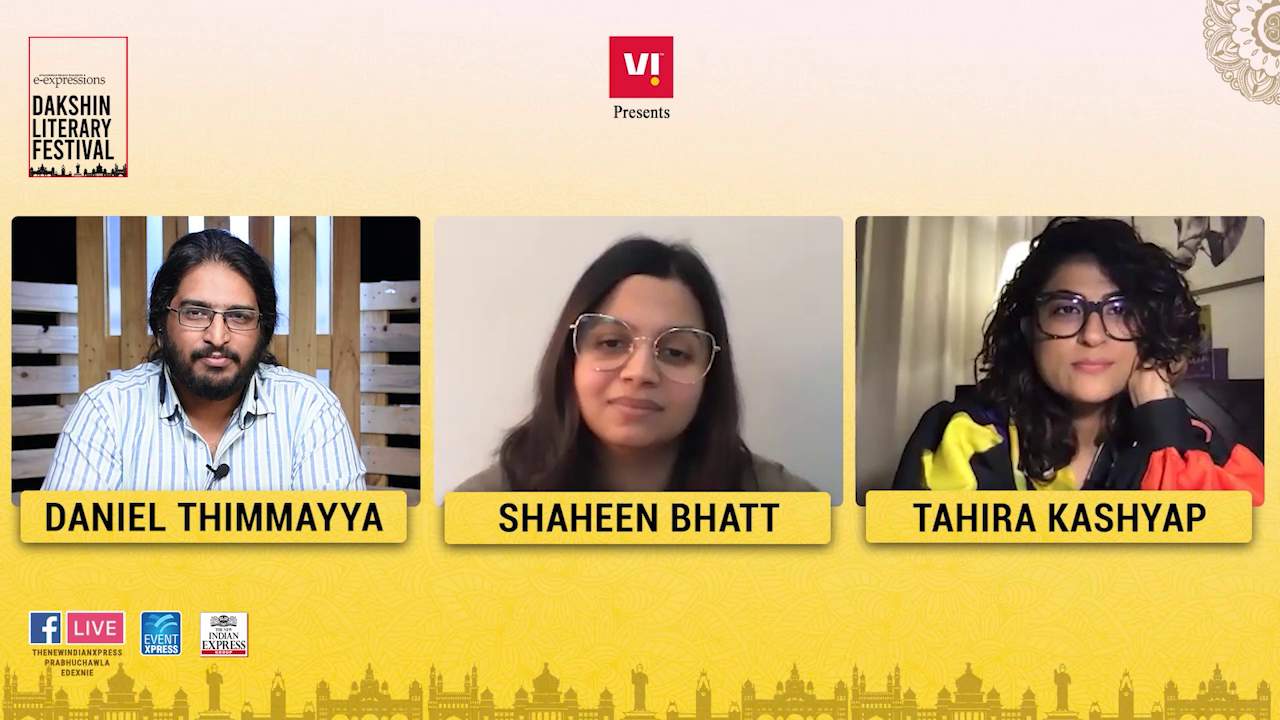 Answering a question about how she narrowed down her experiences into 12 commandments for her book, Tahira says, "It was a collaborative process between my publisher and me. After reading the first chapter, she was in splits and asked me whether I had more such stories. I think as women, our lives are filled with such amazing incidents to share. There are very few books or films that are made on us, through our lens. Women are either portrayed as tragic characters or revolutionaries. While we can be all of that, there is also so much in between. We can be funny, crazy and witty too."

In 2016, Shaheen Bhatt had posted about her battle with depression, and it was that post that prompted her to write the book. Answering a question about it, she says, "I was having a bad day and amid that, I had anxiety on what to post on social media as I hadn’t posted in a while. I was looking for something where I seemed happy and put together, which was exactly the opposite of what I was feeling then. I questioned why I was promoting this culture of being disingenuous and I thought 'why not post about what I was feeling exactly and see what happens'. And that post snowballed into an article and then I’ve Never Been (Un)Happier. I realised how many people were actually going through what I was going through as well. That’s the specialty of mental illness is that it leads you to believe that you’re alone. But when someone comes out and speaks about it, you connect with them on an emotional level. I have been using social media as a means to connect. A lot of people don’t realise that while social media is meant to connect, it is doing exactly the opposite."

Explaining her decision to not write more about her bout with cancer, Tahira says, "It was a conscious decision to not write the whole book about cancer and I only mention it in the last two pages. The book is more about being a woman. How a 13-year-old, 20-year-old or 30-year-old responds to a situation. But saying that, I have spared no medium to talk about early detection of breast cancer. That is something that has helped me and I would like to share it with the world."