While the world is dealing with the COVID-19 pandemic, we take a chance to remind you of the Universal Declaration of Human Rights on December 10. It is celebrated as a World Human Rights Day

With December 10 celebrated as World Human Rights Day, we bring you some interesting facts about how human rights took shape and who all played a key role in identifying these rights

- The human rights movement was a result of the Second World War and the events of the Holocaust. This led to the adoption of the Universal Declaration of Human Rights in Paris by the United Nations General Assembly in 1948

- The Declaration is one of the most translated documents in the world. You will find this translated into 370 different languages

- The concept of human rights was encouraged by King Cyrus of Persia (600-530 BCE) where he released slaves and established equality among fellow citizens. He even banned racism and treated Elpeople of all colours equally 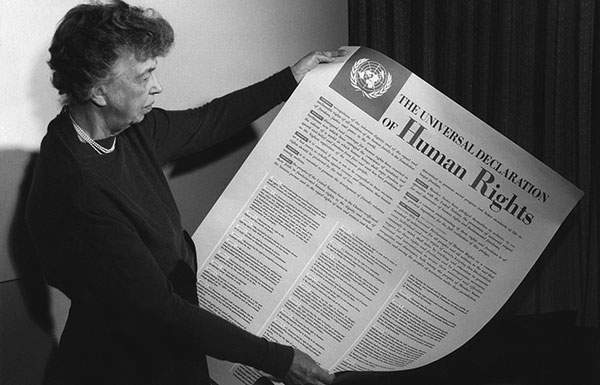 - Before the declaration of human rights, a Commission on Human Rights was formed in the US and Eleanor Roosevelt, the wife of the former president of the United States of America was appointed as the first chairperson. She successfully drafted the document amidst the tension between East and West

Hansa Mehta in saree along with other women from the commission (Pic: United Nations)

- Begum Shaista Ikramullah of Pakistan was another woman in the commission and she emphasised on the concepts of freedom, equality and choice. She spoke about the inclusion of Article 16 on equal rights in marriage. This later became a way to combat child marriage and forced marriage

- Bodil Begtrup from Denmark was the Chairperson of the Sub-Commission on the status of women in 1946 proposed including the rights of minorities in Article 26 on the Right to Education. Though the Universal Declaration of Human Right did not mention the rights of minorities, they ensured that all human beings have equal rights

- Evdokia Uralova of the Byelorussian Soviet Socialist Republic was appointed to report the proceedings of the commission in 1947 and she strongly argued for equal pay for women. Later, it was included in Article 23

- In 2011, the UN declared access to the internet as one of the basic rights accorded to all human beings. In 2012, the UN made access to contraception as a basic right to control the population growth