Former president Pranab Mukherjee died on Monday in an army hospital in New Delhi, his son Abhijit Mukherjee confirmed in a tweet. He was 84. Mukherjee was admitted to hospital on August 10 and a health bulletin this morning said he was in a deep coma and on ventilator support. "With a Heavy Heart, this is to inform you that my father Shri Pranab Mukherjee has just passed away in spite of the best efforts of Doctors of RR Hospital and prayers duas and prarthanas from people throughout India! I thank all of You Folded hands," his son Abhijit Mukherjee tweeted.

The former president was admitted to the hospital in Delhi Cantonment on August 10 and was operated the same day for removal of a clot in his brain. He later developed a lung infection. Mukherjee was the 13th president of India from 2012 to 2017. During a regular hospital visit, he had also tested COVID positive. "On a visit to the hospital for a separate procedure, I have tested positive for COVID-19 today. I request the people who came in contact with me in the last week, to please self isolate and get tested for COVID-19. #CitizenMukherjee," he had tweeted. 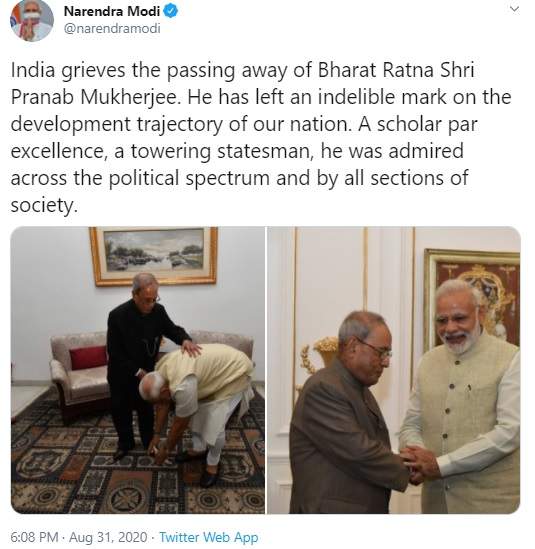 Condolence messages began pouring in immediately after the news of his demise.
Prime Minister Narendra Modi wrote on Twitter: "India grieves the passing away of Bharat Ratna Shri Pranab Mukherjee. He has left an indelible mark on the development trajectory of our nation. A scholar par excellence, a towering statesman, he was admired across the political spectrum and by all sections of society. During his political career that spanned decades, Shri Pranab Mukherjee made long-lasting contributions in key economic and strategic ministries. He was an outstanding Parliamentarian, always well-prepared, extremely articulate as well as witty. As India’s President, Shri Pranab Mukherjee made Rashtrapati Bhavan even more accessible to common citizens. He made the President’s house a centre of learning, innovation, culture, science and literature. His wise counsel on key policy matters will never be forgotten by me." 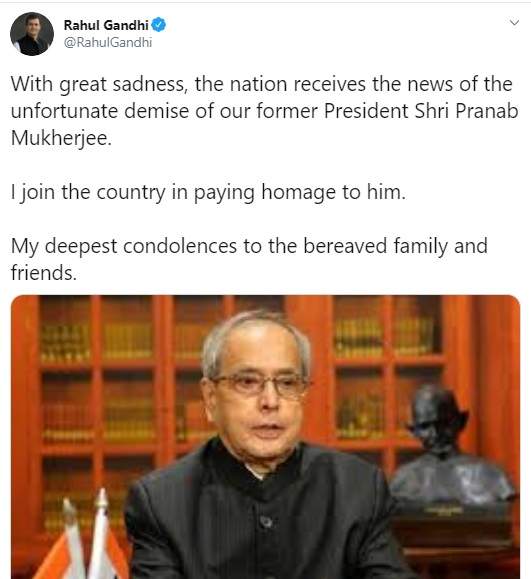 Rahul Gandhi expressed his condolences saying: "With great sadness, the nation receives the news of the unfortunate demise of our former President Shri Pranab Mukherjee. I join the country in paying homage to him. My deepest condolences to the bereaved family and friends."

President Ram Nath Kovind too expressed his grief, adding, "Sad to hear that former President Shri Pranab Mukherjee is no more. His demise is passing of an era. A colossus in public life, he served Mother India with the spirit of a sage. The nation mourns losing one of its worthiest sons. Condolences to his family, friends & all citizens." 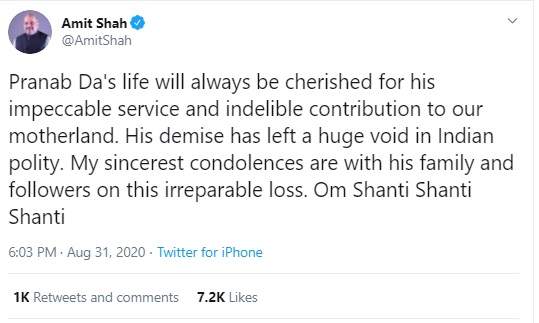 Home Minister Amit Shah wrote that his demise will leave a void. "Pranab Da's life will always be cherished for his impeccable service and indelible contribution to our motherland. His demise has left a huge void in Indian polity. My sincerest condolences are with his family and followers on this irreparable loss. Om Shanti Shanti Shanti," he tweeted.