The scholar allegedly died due to medical negligence, he was given a false COVID test which resulted in delayed treatment and eventual death

The University of Hyderabad’s Students’ Union along with a few other student groups have called for a protest after alleged medical negligence caused the death of PhD scholar Surya Pratap Bharati. Bharati, a student of the University of Hyderabad passed away on August 21 after suffering an ischemic stroke on August 17. Students have been claiming that due to the hospital giving him a wrong COVID positive test, the treatment was delayed resulting in his tragic death.

When Bharati was taken to the hospital and was fighting for his life, the Students’ Union was raising funds for the scholar since his family was getting overwhelmed and overburdened with hospital bills. His friends remained by his family’s side till Bharati lost his battle. As news of his death spread, student groups such as the All India Students Association and the JNU Students’ Union issued statements and demanded that justice be done in his case. The students are protesting by sending mass emails to the University VC demanding that the action be taken immediately.

The Union is making four demands in a ‘mass-email’ campaign to the Vice Chancellor of the University. They are demanding that the University provide financial sir to the family members of the late student. The Union is also demanding an inquiry into the lapses from the Dean, Student Affairs’ (DSW) office and the medical officers in the matter and also to ensure the accountability of the CMO and DSW office in case of medical emergencies. The scholar’s peers are also asked for legal action to be taken against the ‘criminal medical negligence’ by the hospital. 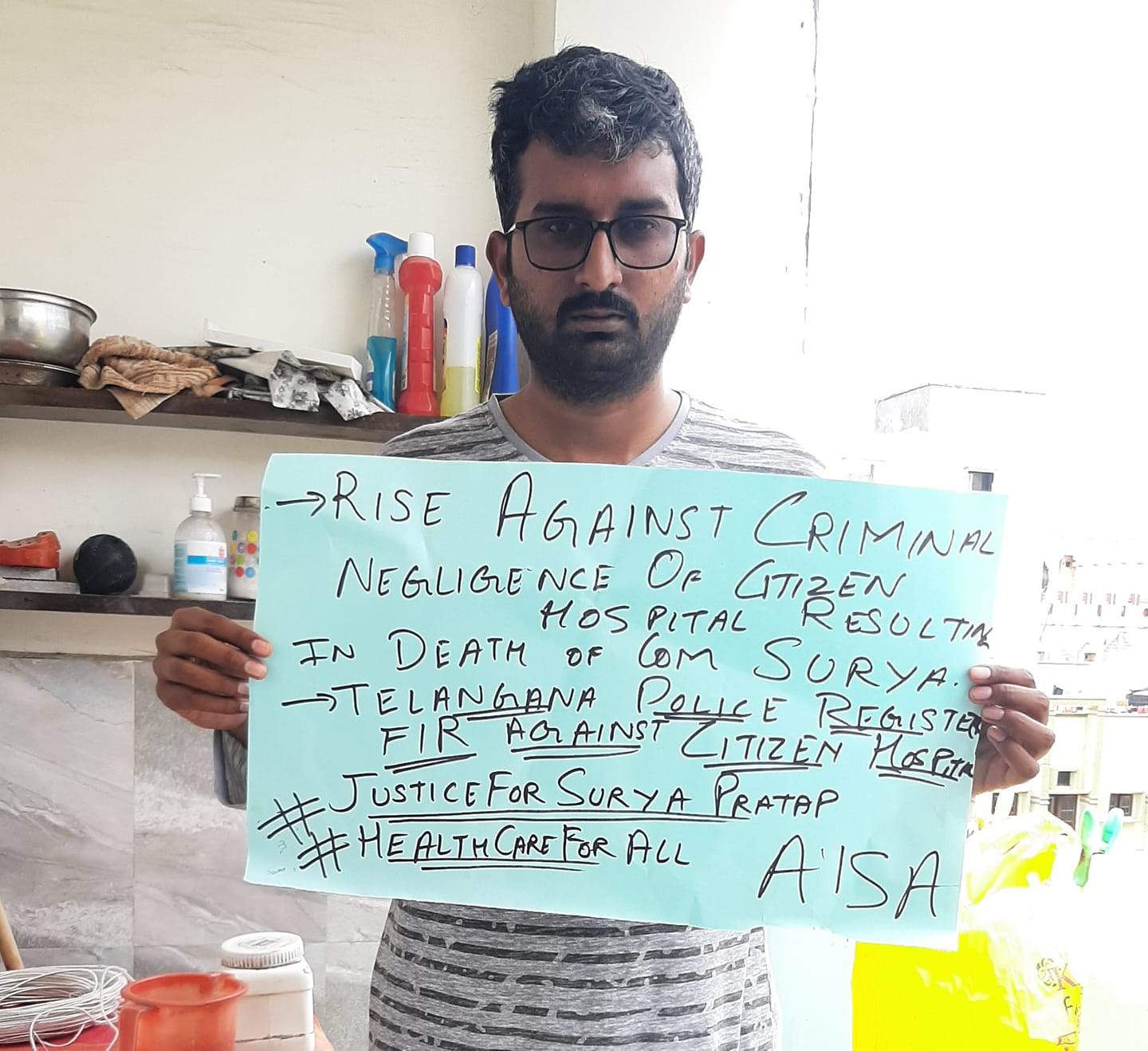 The All India Students’ Association’s National Executive Committee issued a detailed narrative of the incidents that happened leading up to the death of Bharati. “The tragic death could have been avoided with adequate medical intervention and a proactive response by hospital authorities. With the government investment in public health less than 1.5 percent of the GDP the state of public health care in India is abysmal to say the least. A scholar who bravely crossed so many social and economic barriers to pursue a doctorate from one of the country’s finest institutions had to fall prey to the criminal negligence of a private hospital,” they said in their statement.

The AISA made a more detailed set of demands — they demanded a compensation of Rs 5 crore for the victim’s family, “The family is entitled to the compensation for the loss of a son who is a first generation learner from the family owing to their marginalised, social and economic background. His employment could have resulted in alleviated economic conditions. The family is also entitled for the pain and grief they have suffered.”

Secondly, they demanded that a member of Bharati’s family be given a government job. A state level inquiry into the medical negligence and a central committee to probe into the University’s administration as they believe they are liable as well. Finally, the AISA demanded a universal health care system for all students studying in Universities across the country. “A provision should be added to the constituting documents of all the universities where the university administration should be held liable for a medical treatment upto at least 25 lakh for all the bonafide students of the University,” they stated.

On August 17, Bharati was found collapsed on his room floor with only mild consciousness. He was rushed to the hospital that the health centre on campus referred him too. He was allegedly given a COVID test that came back negative but was administered another test which his friends say came back positive.

“When the students took him to the hospital, immediately a Rapid COVID test was conducted and he tested negative. He was then taken for an MRI scan and the doctors said that he would need surgery within 24 hours. We had our medical insurance and told the doctors to do the surgery. But they said that they could not do the surgery until they did a PCR test and got the results. But they didn’t collect his samples till the next day and the results of the test came only the following day, which was August 19. By the time, they admitted Bharati to another Hospital, it was too late,” a member of the Union, explained. Bharati was then administered three tests to confirm that he was COVID positive — all of which came back negative. His friends believe that since the scholar was kept in isolation, the crucial hours during which his life could have been saved, were wasted, resulting in his death.