Why did SC accept that government policy to hold NEET, JEE in September can't be challenged? asks Subramanian Swamy

BJP's Rajya Sabha MP Subramanian Swamy Thursday said that it is too late to file a new petition urging to postpone NEET and JEE and only a review petition is now allowed at this stage. He asked the students urging the government to postpone NEET and JEE Mains on Twitter if their lawyer had argued at the Supreme Court that the policy is undefendable or assailable "if it is proved to be arbitrary, unreasonable and malafied". He also added in his tweet that he was surprised why the apex court accepted the government's stance that the policy cannot be challenged.

"Did your advocate argue that policy is assailable before the SC if it is proved to be arbitrary, unreasonable and malafied? Otherwise not. Because I was surprised that SC accepted the Government stand that it is policy decision so it cannot be challenged," tweeted Swamy. When a Twitter user urged him to file a petition on behalf of the students, Swamy said that it is too late, "Too late. Only a Review Petition is now allowed since you had already filed as an affected party and got it dismissed. I am a member of the ruling party BJP and the courts will not permit me in the public interest," said the veteran politician.

All India Trinamool Congress's Rajya Sabha MP Dinesh Singh replied to Swamy's tweet as well. "The courts are not meeting physically and rightly so, for protection against COVID. The PM had also rightly said, “ Jaan hay toh Jahan hay “. So please enlighten me why this is not applicable to the students?" asked Singh. 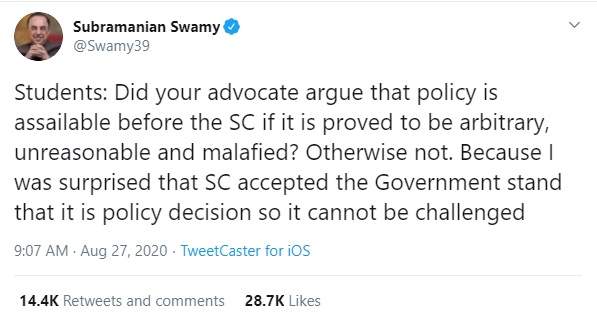 Swamy has taken to Twitter to reach out to the students for the past few days and spoken in support of those demanding the postponement of the exams. "At this stage, I cannot guarantee anything but don’t yet lose hope on the exam question," he tweeted early on August 26. "Does the government realise holding NEET or JEE exams at this juncture favours the children of rich parents in major cities? In the last five months, the poor and lower-middle-class children have had no access to internet or ability to go to libraries or collective study. PM can empathise," he had written in his earlier tweet on August 25.

Along with the trending hashtags #postponeJEE_NEETinCOVID, #PostponeNEET_JEETODAY and #JEENEET, the tag #Swamyji_HelpJEENEET is also becoming increasingly popular among students who are protesting against the decision. "If our Modi Government goes through imposing the NEET/JEE exam now it will be the giant mistake like Nasbandi in 1976 that caused the undoing of Indira government in 1977. Indian voters may suffer silently but have long memories," Swamy had tweeted earlier.

But the Ministry of Education has not yet reacted to the issue yet, on the contrary, the National Testing Agency has already also announced the admit cards of the NEET aspirants will also be available soon. "On the request of the students, the JEE (Main) and NEET, which were earlier scheduled to be held in the month of July, were postponed to be held in the month of September 2020," said the statement. The statement also quoted the Supreme court order which said, "We find that there is absolutely no justification in the prayer made for postponement of the examination in question relating to NEET 2020 as well as JEE (Main) April 2020." NTA has released the admit cards of JEE after the judgement. "The admit cards of NEET will also be released shortly and the NTA has ensured that more than 99 per cent of the candidates get their first choice of Centre Cities in both of these examinations," the statement from NTA added.