The SC's decision to hold the exams were called arbitrary, whimsical and violative of the fundamental right to life of students in the petition

One of the netizens wrote that the Bharatiya Janata Party (BJP) at the centre is the most insensitive government towards students. While a few others called out to their fellow JEE and NEET aspirants asking them to never vote for the BJP again in the future. Some have even called it a political move saying that such important exams cannot be conducted amid the ongoing crisis of the pandemic. A few students have even pointed out that several states are still under lockdown and there is no public transport for them to reach the examination centres, asking why the Central government is putting the health and careers of lakhs of students under jeopardy? 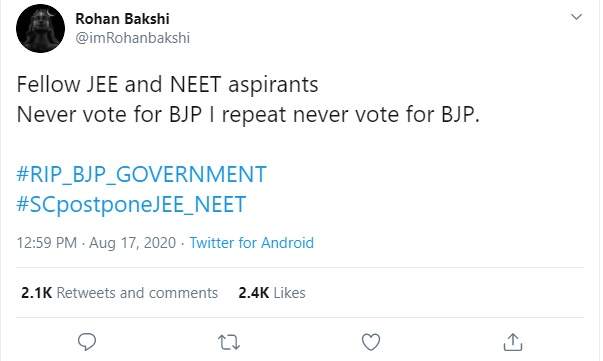 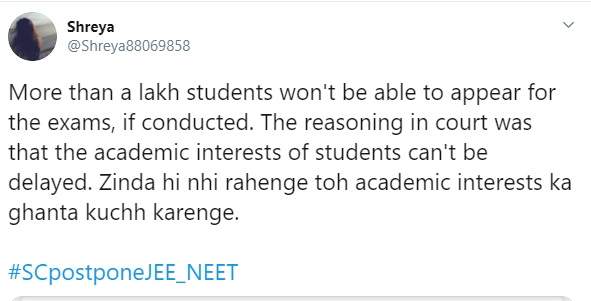 The petition, filed by eleven students from eleven states, contended that the decision to hold JEE (main) exam through online mode from September 1 to 6 and NEET UG-2020 through offline mode on September 13 at 161 centres across India are arbitrary, whimsical and violative of the fundamental right to life of lakhs of affected students. The plea said that the Institution of Chartered Accountants of India (ICAI) had cancelled the CA exams citing COVID-19 risk and remaining exams of CBSE/ICSE/ISC have also been cancelled. It said that the Common Law Admission Entrance Test (CLAT) and the National Institute of Open School exams have also been postponed.

"Lakhs of young students are likely to appear in the aforesaid JEE (Main) April-2020 and NEET UG-2020 Exams in the month of September 2020. Meanwhile, COVID-19 cases are increasing in India at an alarming rate. The deadly pandemic COVID-19 has already affected about 20 Lakh people in India and the situation is worsening by every passing day," the plea said.

Solicitor General Tushar Mehta, appearing for the National Testing Agency, submitted before the apex court that all the safeguards will be taken while holding the exam.