Having lost his father at a very young age, Arun was single parented by his mother. A graduate of Computer Science, Arun now works at a private construction company in Madurai

A volunteer at a city-based NGO, Idhayam Trust, Arunkumar, was recognised for his service to abandoned elderly people for over four years now. Notably, a volunteer at the same NGO, one R Kalaivani, received the CM'S State Youth Award in the year 2019. The NGO focuses on providing food, cleaning up abandoned persons, providing first aid treatment and hospitalisation if required and reaching out to their family members to reunite them. They also perform last rites for unclaimed corpse. 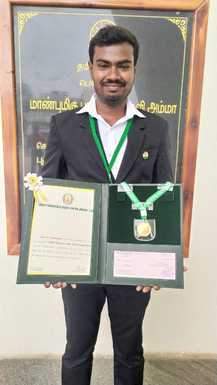 Having lost his father at a very young age, Arun was single parented by his mother. A graduate of Computer Science, Arun now works at a private construction company in Madurai. Sharing his life-changing moment to TNIE, Arun said, four years ago when he was at a tea shop near a private hospital in the city, he saw an abandoned elderly man lying on a roadside platform.

"He was stinking badly that even the passerby would close the nose and take two steps away when they crossed him. I decided to buy a cup of tea and bun for him as he was seen hungry," said Arun. Meanwhile, a team of youngsters, all in a uniform printed 'Idhayam Trust' on their backs, reached the spot. They helped the old man sit on the platform and enquired about his whereabouts. They then cleaned him up and made efforts to trace his family. By then, Arun received an official call from his office that made him leave the venue. "That night I could not sleep as too many questions flooded my mind. I was ashamed of the level of my empathy which was only to an extent of quenching the old man's hunger for that particular moment, while the team of people, who were near of my same age category, had touched and helped him when no one even dared to walk next to him. They were looking for a permanent solution, while I only served for a temporary change then," Arun said adding that the next day he enrolled himself with the NGO and has reached hundreds of people since then.

He added that the award has given a motivation to work towards his next goal of making Madurai free of street dwellers. NGO bags District Collector's Award of AppreciationRecognising the service of Idhayam Trust during the pandemic, District Collector TG Vinay honored the NGO with an Award of Appreciation during the 74th Independence Day celebrations held at the Collectorate on Saturday. Director of Idhayam Trust, GR Sivakumar, said that since the day one of Covid-19 induced lockdown in March, the volunteers had rescued 352 abandoned destitute individuals and housed them at three camps for 75 days. Of them, 110 were reunited with their families, while 25 people, who were alcoholics and addicted to drugs, were admitted at rehabilitation centres. This apart, the volunteers had also helped in employment for 20 homeless people and joined 15 abandoned senior citizens at government homes.