Departments like Anthropology, English, Biochemistry, Commerce, Economics, IB, Math, Social Work and others who have four or more vacancies have been completely reserved for JRF scholars

Pondicherry University has changed its mode of admissions to its PhD courses, according to its latest prospectus. Up until last year, admission tests had been waived for students who had secured fellowships and scholarships like the Junior Research Fellowship (JRF), National Fellowship for Scheduled Castes (NFSC), National Fellowship for Scheduled Tribes or the Maulana Azad National Fellowship for Minority Students. This year, the exams have only been waived for those who secure JRF and this — several student bodies and students and aspirants from marginalised communities believe — is a direct assault on their democratic and constitutional rights. The University’s new decision could essentially result in the systemic exclusion of students belonging to SC/ST and minority communities, according to them.

This is not all, the prospectus also announces that certain departments like Anthropology, English, Biochemistry, Commerce, Economics, International Business, Mathematics, Social Work and others who have four or more vacancies have been completely reserved exclusively for JRF students. This new rule has left students who have these scholarships devastated especially since they had already been planning the next few years and now are being made to feel like the merit they earned is not sufficient for them to get into the PhD programme. But what is really frustrating them is they have not been given any valid reasons as to why this decision was taken. It is almost as if they are being blatantly told that their scholarships are not equal to the JRF, as if their ‘merit’ is not equal to those who have availed the JRF. According to an estimation by the Ambedkar Students’ Association on campus, students who have been selected for the NFSC, NFST and MANF fellowships could lose about 40 seats because of the new rule. 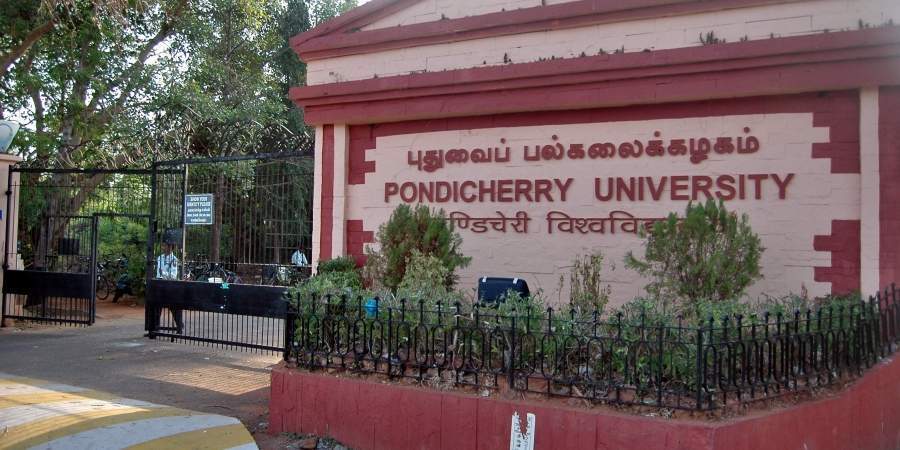 The Ambedkar Students’ Association on campus has condemned the new prospectus, “It is a reflection of a clear-cut Brahmanical design and a clear onslaught on the rights of Dalit, Bahujan, Adivasi and Muslim students. These scholarships aimed to provide a modicum of social justice by attempting to provide a level-playing field for PhD candidates belonging to various sections of society. This policy is designed to prevent us from accessing spaces of Higher Education,” the members say.

Vicky Kumar, an ASA convenor and a student from the Human Rights and Inclusive Policy Department says the new rule is violative of the constitutional right to reservation. “The Departments have stated so clearly that the seats are reserved for JRF students only. All our scholarships are equal to JRF. If the exams have been waived only for JRF students then what is the value of entrance exams? Here, exams are not a way to provide opportunities for students to join the university, it is a way to cut out as many students as possible. What we are being told is that we will not be allowed to study,” he told us.

Before it was called the National Fellowship for SC and National Fellowship for ST, the scheme was called the Rajiv Gandhi National Fellowship, “When Thorat (former UGC Chairman) proposed the scheme he wanted to name it after Dr BR Ambedkar and then the Congress accepted the proposal but wanted to name it after Gandhi, Now, of course, the name has changed again. But when Thorat proposed the scheme, he did it to ensure more students from oppressed communities got a chance to represent themselves in higher education spaces,” Vicky said. Initially, candidates could avail the scheme just by sending a PhD proposal, if it got approval, the candidate was granted the fellowship. But again a few years ago, the NET exam became mandatory to avail the scheme, “Now again, there are new limitations that will further cut out students. The University is saying - you are getting an education on my taxes so I will place my conditions. This is only going to further demoralise the marginalised,” he added. For Arunesh X, a NFSC scholar, this new decision once again reflects the ‘myth of merit’ in the country, “These new changes have been tactfully placed in the prospectus. It has yet again come to this myth of meritocracy, as if those who get JRF have come through merit and somehow the process to get the other fellowships is not based on merit. I keep hearing quality over quantity but that makes no sense because in comparison to, for example, China, there are 100 research scholars per capita and in India it is only 15. I lost out on JRF by just 0.64 percent, so does that mean I don’t have merit because I have availed of the NFSC?” he questioned.

Since the seats in various departments have been reserved for JRF students and some seats have also been cut, even if Arunesh does get through the entrance exam, the chances of his getting a seat are very low, "Thepreference  will be given to JRF scholars". Till before the prospectus came out, Arunesh had his immediate research future planned out in PU with regard to the kind of research that he wanted to do and how he wanted to do it. Now, he's not sure anymore. Arunesh has called up several members of the administration repeatedly to ask them why this new rule was brought in, “I’m frustrated because no one is able to tell me why this has happened.”' 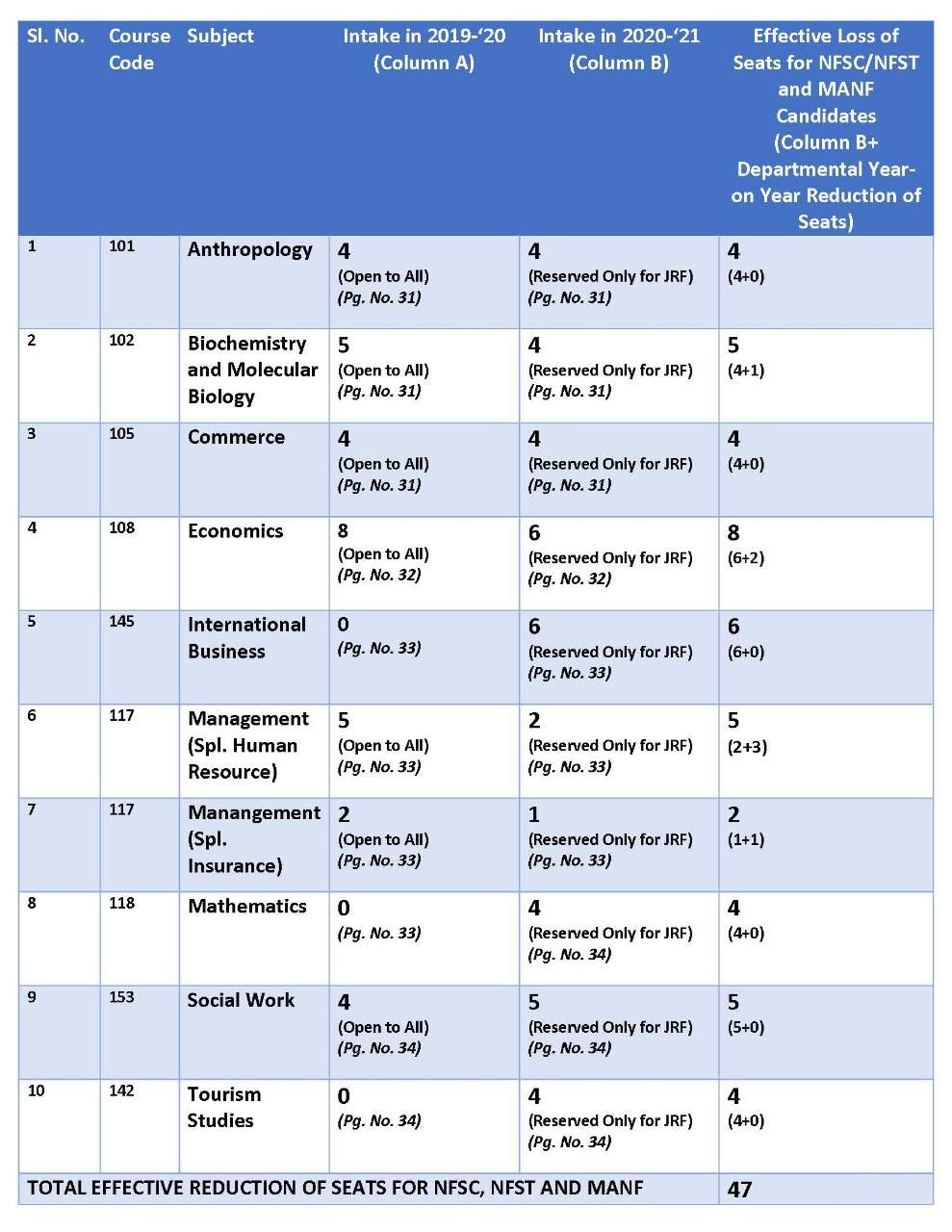 Aruna M (name changed), a Masters student, knew of this new decision even before the prospectus came out because she had approached her guide with the good news of her getting selected for the NSDF scholarship and then was told that it wouldn’t help her get a PhD seat. “This was how students from marginalised communities could come into the mainstream. My father thought I was set after I got my scholarship. He’s going to retire in two years and we thought I had secured a PhD at PU and would be able to support myself for the next five years. Now, once again, I have to start from the beginning and this has left my family worried. This is going to take a toll on me because again I will be competing with such a large number of people. It feels like I’m getting tested over and over again despite the fact that I’ve been able to prove that I’m good,” she said.

Another convenor from ASA points out that representation of marginalised students in Universities, especially in Central Universities is already abysmal and this will further deepen the marginalisation, “This is what leads to institutional murders too. Whether it be Rohith Vemula, Payal Tadvi or even Anita.” She reminds us that the fellowships for OBCs were diluted the same way and now the same is being done to scholarships for students from SC, ST communities. “We are not all equal and that’s the truth,” a PhD student at the University who is a recipient of the scholarship said.

One of the most disheartening things for students is that the varsity has not backed them on this, “Universities should use their power to enhance the lives of students of increasing opportunities. When the US government announced that foreign students have to return home, universities like Harvard took a stand against it and supported their students. Would that ever happen here?” Vicky asks. A student who is currently pursuing PhD at the University says getting the NFSC is the only reason why he is even at the PU. And if not for it, he would have given up academics altogether as he comes from a very difficult background, “I’m from rural Andhra Pradesh and I only studied in the Telugu medium. My MA was my first English-medium course. I took a year off so I can get into a good university and only managed to get selected in the second round of counselling through reservation. It wasn’t as though I was a bad student, I got first class marks in Telugu-medium. But I started learning English and scored a good GPA.”

The student says the only reason he was able to study further is because of reservations, because of which he has been able to guide other aspirants back home in his village,”I was lucky to be from the last batch that could apply for the RGNF. If I hadn’t got it, I would have stopped my education there. Now the youth in my village are drawing inspiration from me and aspire to study higher. As per my knowledge, all the PhD students from marginalised sections in our department got seats only because of these fellowships.”

What he leaves us with are compelling words — “It isn’t just about me. This means so much to people from my community,” he says.

We've reached out to the University for a comment and will update this copy when we receive it.