FIR against Assam University prof for FB post on Ram and Modi. What was the 'joke' about?

A case has been registered against the professor under Sections 295A,294 and 501 of the IPC. He says what is happening now has scared him

An FIR was filed against Dr Anindya Sen, an Assistant Professor of English at the Assam University, for allegedly hurting religious sentiments in one of his Facebook posts which 'jokes' about Ram and Sita. The FIR has been filed at the Silchar Police Station by 19-year-old Snehangshu Chakraborty. Dr Sen has been incessantly been trolled and abused on Facebook. He has received threat messages as well. The professor, who is in touch with his lawyer, is yet to file charges.

Dr Sen posted a quip about Ram and Sita's relationship that also indirectly hinted at the Prime Minister's relationship with his wife. "Ramayana has many versions and in most of those Ram does abandon Sita. I was just pointing out that criticism. Indians have been known to criticise their gods and we take the side of the woman. We have criticised Shiva and supported Parvati, we have criticised Krishna and take Radha's side — this is not a narrative I have come up with. This criticism, that Ram had abandoned Sita, has been there for ages. But now it seems like there is only one narrative and nothing else. What is happening all around makes me very sad," said Dr Sen and added that he is now afraid of going back to Silchar from his hometown Kolkata. 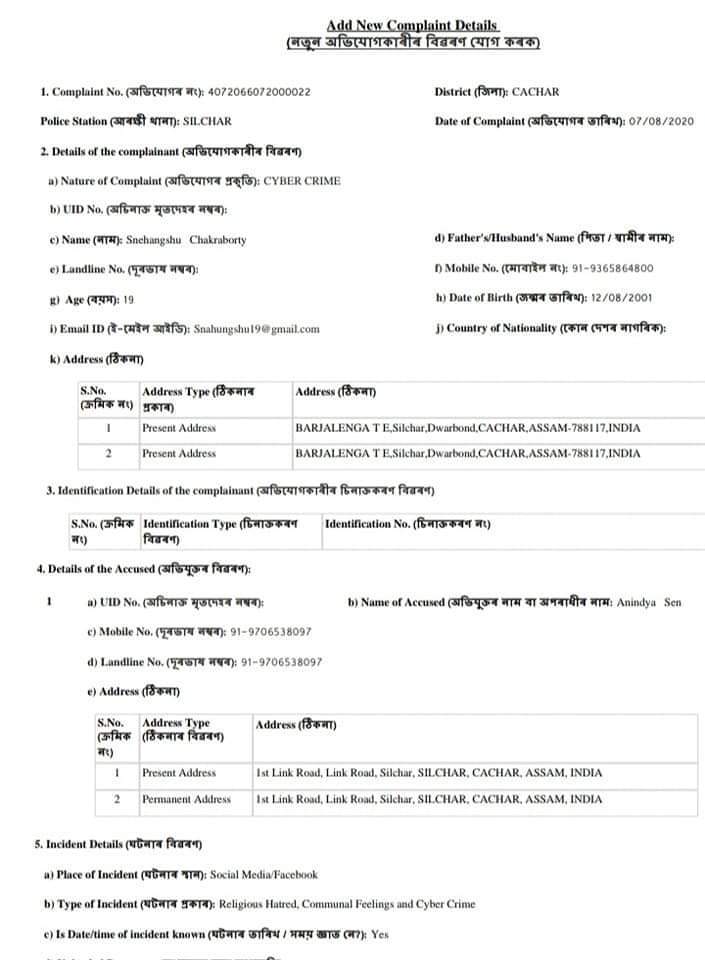 Snehangshu Chakraborty filed the complaint on August 7, a day after Dr Sen's post. A case has been registered against the professor under sections 295A, 294 and 501 of Indian Penal Code (IPC). Section 295A penalises "deliberate and malicious acts, intended to outrage religious feelings of any class by insulting its religion or religious beliefs". Section 294 punishes for obscene acts or words expressed in public while 501 says that "whoev­er prints or engraves any matter, knowing or having good reason to believe that such matter is defamatory of any person, shall be punished with simple imprisonment for a term which may extend to two years, or with fine, or with both".

Dr Samata Biswas, who teaches English Literature at a Kolkata College said that Dr Sen is not just a revered academic, but also a loved teacher. Dr Biswas was among those who openly stood with the professor and posted on social media about it. "We have been teaching the students Greek literature and have discussed Zeus's infidelity. Now that we are teaching Indian classics we look at it as another literary work and discuss, analyse and criticise it as well," she said. "I won't be able to do that it there's always a fear that someone might be recording and I might be trolled for something I said as part of an academic discussion," she added.

Dr Sen said that he feels asphyxiated and this will definitely affect education. "If we do not have the liberty to speak our mind, how else are we going to teach our students critical thinking?" asked the teacher.