CEO Eric Yuan had admitted that despite "working around the clock" to support the influx of new users, the service had "fallen short of the community's privacy and security expectations"

The COVID pandemic had brought the world to a standstill. No interaction with people, no work — it looked like a mundane couple of months. Right then, we found Zoom — the app that can help hangout with a bunch of friends without any of you leaving home. When launched in 2013, Zoom was meant for corporate use — for meetings, discussions etc — but the pandemic and the resultant lockdown has made it a household name. But is it safe?

With the Cyber Coordination Centre (CyCord) of the Ministry of Home Affairs (MHA) announcing that the app is unsafe, some of us are scared to use the app, least we lose our data. But Sameer Raje, India Head, Zoom Video Communications Pictures, says there's nothing to fear. All you need is to know how to use the app properly and for that you need to be educated.

Out of the 300 million participants, 81,000 are paid customers and a chunk of them are firms that pay for a huge amount of the revenue, adds Sameer. "A jump from 10 million participants to 300 million creates massive pressure on the servers but we have a core design that always leaves space for expansion. We use only 40 to 60 per cent of our total capacity. We are also equipped to increase server capabilities at a short notice," he says. They do not take up a project before preparing for it, says Sameer, "When schools in India wanted to use the platform for online teaching we took two days to make sure we are equipped for it," he adds.

Zoom CEO Eric Yuan had earlier admitted that despite "working around the clock" to support the influx of new users, the service had "fallen short of the community's privacy and security expectations", reported BBC. "For that, I am deeply sorry," he wrote. The platform had 10 million daily participants last year, 200 million this March and now it's 300 million per day. This huge usage has given birth to Zoombombings — uninvited guests join the video meetings, and shout abuses or share pornography. The miscreants fish out the details of the meetings either via links shared on social media or by simply guessing the nine-digit code. which has now been upgraded to 11-digit code. 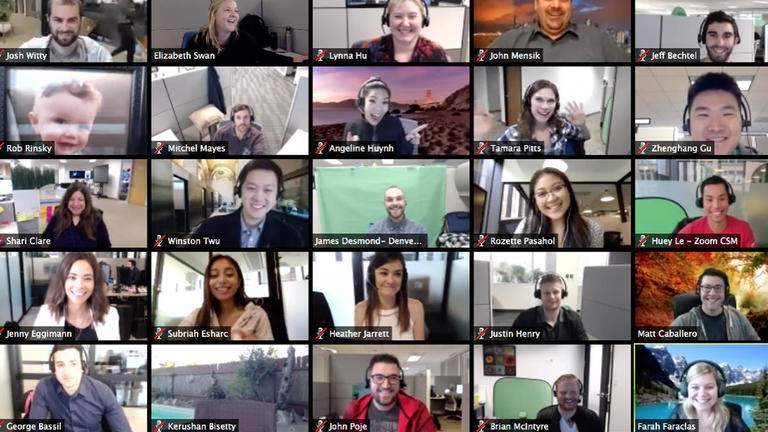 The rapid growth is obviously because of people stuck at home due to the lockdown imposed across India and other countries. "We have a new set of clients now. We have everyone from 12-year-olds to people getting married to some hosting house parties on the platform now. We have always been an enterprise-grade solution. This is a completely different use to the platform and the way the people are using it is also very different. Zoombombings or meeting bombings will not occur if the platform is used in a more secure way. So, they probably need to be coached and guided on how to safeguard themselves. Otherwise, it is as good as keeping Rs 10 lakh at home unlocked and posting about it on social media and leaving the house for one month. Obviously people will try to rob you," he says, adding that Zoom has been working on educating its customers. "We have been working with schools and other institutions to tell them what are the best practises. And then we elevated some of the security protocols from the platform and forced on these users," he adds.

Sameer says the security features, like locking the meeting room, using a virtual room or setting new passwords for a meeting, were already a part of the platform but now it is mandatory to use these features. "Talking about the Indian Government and some other governments saying that the platform is not safe, we have also seen quite a few turnarounds once we explained to them how it works. We did that with the Ministry of Education in Singapore and they have now given a go-ahead for schools to use the platform. The UK Parliament has also been assured that it is safe to use," he adds.

Sameer says that Zoom was popular before the pandemic as well but no one could predict this sudden boost. "We'd not anticipated that every person in the world will start working and socialising from home all of a sudden. Why did people choose Zoom? Why did it work? Because it's fast and seamless — even in remote parts of India where the connectivity is poor. And the second thing that worked was that we are the closest to your customers — they tell us what works, what doesn't and what more they want," he adds. The updated Zoom 5.0, has encryption and updated privacy controls. These updates are a part of the 90-day plan to enhance the security of the platform and to ensure privacy.