Vape-ban is just to increase ITC stock prices, not for healthy India: Why vapers think e-cigarette ban is a bad idea

Hundreds of vapers, harm reduction advocates, medical professionals and members of the legal fraternity came together on Saturday to oppose the government’s decision to ban e-cigarettes and vaping

Smoking is bad. So is vaping. But these vapers claim it might be a tad bit better than smoking tobacco. The Association of Vapers India (AVI), an organisation of e-cigarette users, held nationwide protests in New Delhi, Mumbai, Bengaluru, Hyderabad and Kolkata, and addressed the media in Chennai against the recent ban imposed on e cigarettes by the government.

The protesters said that the ban is nothing but "wilful genocide" by the government as it will deprive the country’s 11 crore smokers of safer options. "Smoking kills nearly a million people in India every year. The government’s unilateral decision is based on its vested interest in the tobacco industry. Why will the Finance Minister present the notification otherwise? We do have a Health Minister. If it was all about health why did he not announce the ban?" asked Cary Edwards, a media consultant, stand-up comedian and actor who used to smoke more than 40 cigarettes for 23 years before switching to vaping. "The government wants proof that vaping helps? We are the proof. Four years ago I was diagnosed with Chronic Obstructive Pulmonary Disease (COPD). After I quit cigarettes I am much better. The COPD has not recurred in years. The government is neglecting public health as well as human rights to shield cigarette commerce as vaping has led to historic declines in smoking rates in countries where it has been allowed. And the government owns around 28 per cent of ITC. Why won't they be concerned?" added Cary. 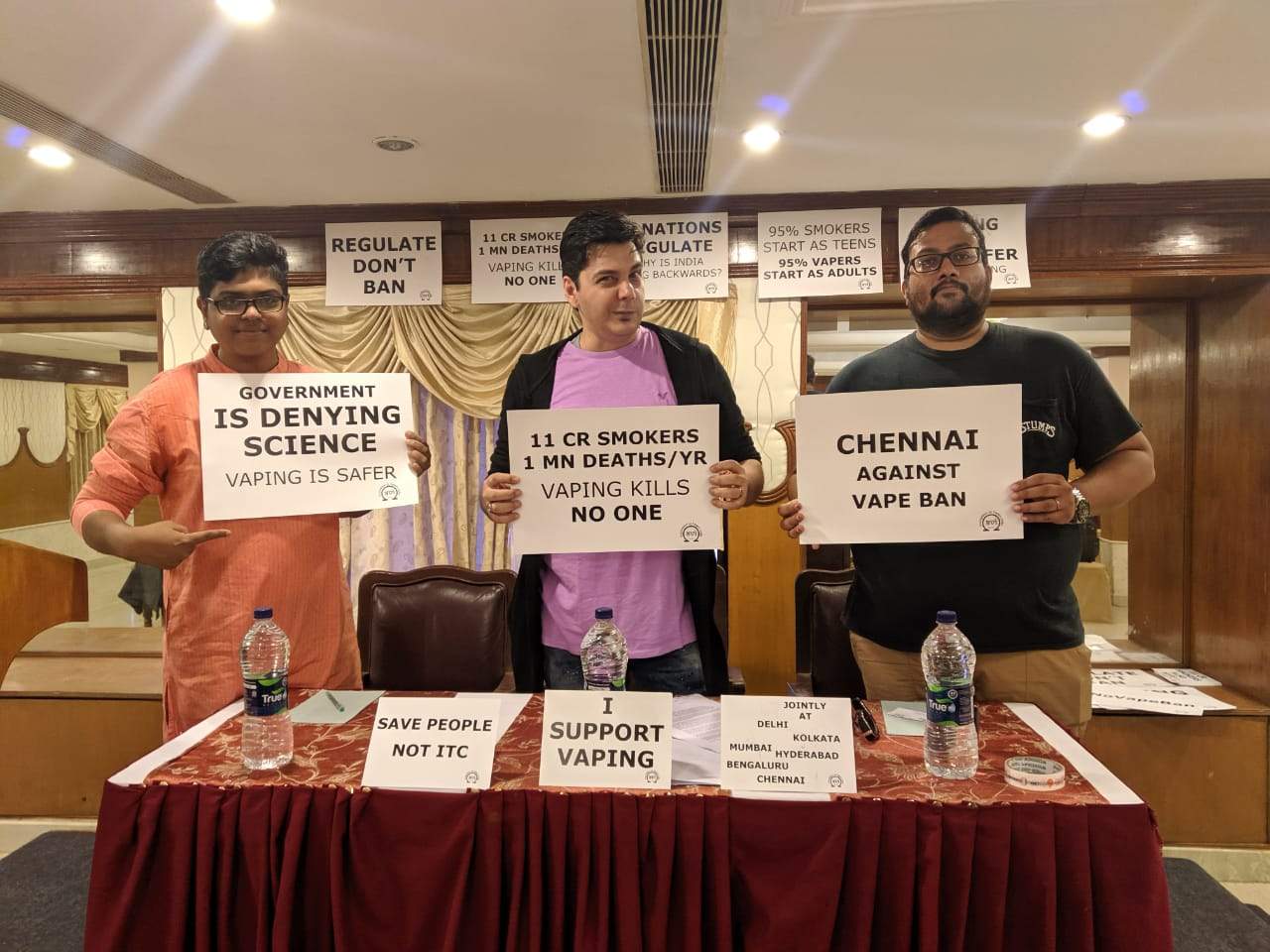 The e-cigarette ban in India came at a time when Centers for Disease Control and Prevention in the USA said that they were investigating more than 380 vaping related diseases. But Cary says theirs more to that story

"When we read these stories we tend to not understand the finer details and just go by the headline. In the USA people are not just smoking nicotine vapes and people also use black market low-quality vapes that affect them badly. But that does not mean you ban it. Regulate, do not ban. That's all we are saying," said Cary, who heads the Chennai chapter of the organisation.

Nirmala Sitharaman had said that a major reason behind the ban was that youngsters are getting addicted to vaping. "There is a legal age beyond which you are not allowed to smoke or vape. So they should not be doing Either. And it is way easier to get a cigarette that a vape. Vapes cost Rs 3,000 to Rs 5,000 and a cigarette, even the best, imported ones cost Rs 15 a stick. Which do you think a teenager would go for?" asked Cary.

Association of Vapers India is a non-profit that advocates tobacco harm reduction through the use of vapour products and electronic cigarettes to help smokers quit. AVI is connected to a community of over a lakh consumers who have quit smoking through vaping. Its members include professionals from all walks of life, including medical and legal professionals. AVI is part of the International Network of Consumer Organisations (INNCO), which represents 34 national consumer advocacy bodies. It is also part of the Asian network - Coalition of Asia Pacific Harm Reduction Advocates (CAPHRA).

The legal fraternity said the ban on e-cigarettes is ultra vires to the constitution. “When addressing issues of public health, it is imperative upon the state to act like a parent towards its citizens. By snatching away e-cigarettes, which are scientifically proven to be the most effective smoking cessation method, the state has not only condemned its 11 crore citizens to a lesser life and a bleaker future but has also put at risk their families. The government has abdicated its duty as a parent and has decided to treat its citizens like a trader – simply trading their lives and future away for higher revenues and the greater benefits of a select few,” said Pingal Khan, an advocate, from Bangalore.

Dr Aparajeet Kar, a pulmonologist from New Delhi who was also at the protests, said, “E-cigarettes, unlike conventional cigarettes, do not burn tobacco thereby producing no tar or carbon monoxide, two of the most damaging elements in a conventional cigarette. Moreover, there is no evidence so far that vaping causes harm to other people, which is in contrast to secondhand smoke which kills 800,000 people every year.” Kamal Bhattacharya, an artist from Bangalore, asked, “Nicotine in the form of cigarettes, gums and patches is widely and easily available. Vaping is just another method to inhale nicotine. Then why the government has banned only this category? The government allowed cigarettes to be sold easily and people got addicted and now they have to take little responsibility to undo this devil by allowing people effective means to wean off.”