University of Hyderabad gears up for Students' Union elections on September 26. Will ABVP win again?

This year, the elections are scheduled to be held on September 26 and a number of student parties are gearing up to contest this year

Probably one of the most political educational spaces in India besides JNU is the University of Hyderabad, especially after the Rohith Vemula movement in 2016. The University has always had its share of student movements and so, its not a surprise that the Students' Union elections is quite an intense time for the campus.

This year, the elections are scheduled to be held on September 26 and a number of student parties are gearing up to contest this year. The Ambedkar Students Association, Students Federation of India, Dalit Students Union and the Telangana Students Federation have formed an alliance this year. The SFI and the ASA have had their differences but this year they've come together to 'fight the right-wing'. The alliance has proposed candidates for all the posts — President, Vice President, Joint Secretary, Cultural Secretary, Sports Secretary, GSCASH (Research, PG, Integrated).

The ABVP won the elections last year and is putting up a strong front, this year too. They have formed an alliance with the OBC Federation and the Sevalal Vidyarthi Dal again and have nominated candidates for all the posts this year. Last year, the ABVP's Aarti Nagpal won the post of the President. Interestingly this year, a former NSUI President is standing for the post of President from the ABVP alliance this year. And what is even more interesting is that the NSUI has completely refrained from contesting the elections this year except release a statement asking that the students 'vote out the ABVP. 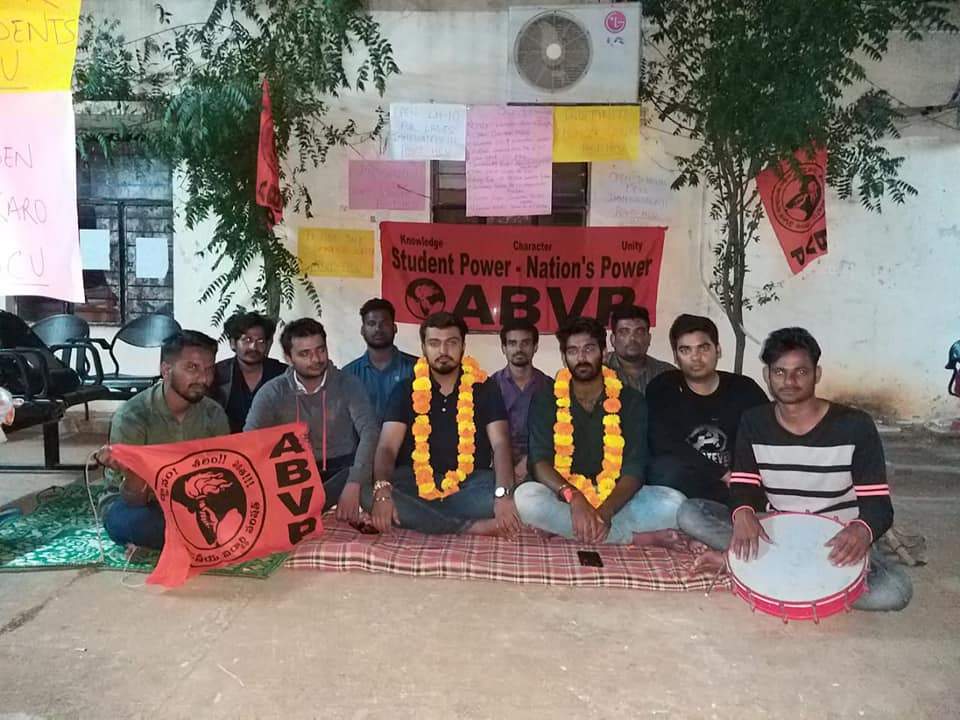 Repeat Win? :The ABVP surprised everyone by winning the elections last year and has claimed to have fulfilled many of their promises

This year, a new party was also formed — Youth for Inclusive and Sustainable Society and four candidates from the party are standing for the posts of President, Vice President, General Secretary, Joint Secretary and GSCASH for Masters students. The UoH also has two independent candidates named Vamsi for the post of Vice President and Konda Ramaraju for the President's post.

Today marks the last day of campaigning, the candidates have to observe a 'no-campaign' day on September 25. However, students are disappointed that there was no Presidential debate this time but when they approached the election committee, the students were given excuses that there was no space or time to conduct them. Despite this though, candidates have taken over social media to give their speeches and campaign this year.

The elections will take place between 9 am to 5 am on September 26 and the counting and result announcement will be on September 27. UoH does its election in the traditional ballot paper style.