Mark Zuckerberg says 'No' to Republican Senator asking him to sell off WhatsApp, Instagram

The popular services are among some 70 companies that Facebook has acquired over the past 15 years or so, giving it what critics say is massive market power

The Senate's most vocal critic of the tech industry Senator Josh Hawley, a Republican freshman has offered a challenge to the Facebook CEO Mark Zuckerberg: 'Sell your WhatsApp and Instagram properties to prove you're serious about protecting data privacy.'

Hawley is one of the more outspoken critics of Facebook and he said that he had a "frank conversation" with Zuckerberg but remains concerned.

"Challenged him to do two things to show FB is serious about bias, privacy & competition. 1) Sell WhatsApp & Instagram 2) Submit to independent, third-party audit on censorship," Hawley tweeted. "He said no to both." This may have been more than what Zuckerberg expected from his private meeting with the Senator. He met Hawley in his Capitol Hill office.

Zuckerberg left the hourlong meeting  one of several with lawmakers on Capitol Hill  without answering questions from a throng of reporters and photographers pursuing him down a hallway.

Hawley, though, had plenty to say. "The company talks a lot. I'd like to see some action," he told reporters. "I will believe Facebook when I see some real action out of Facebook."

Rather than moving users' personal data from properties such as WhatsApp and Instagram to the core Facebook platform, the company should put a wall around the services or, better yet, sell them off, Hawley said he told Zuckerberg.

Zuckerberg, who requested the meeting, "did not think that was a great idea," he said.

The popular services are among some 70 companies that Facebook has acquired over the past 15 years or so, giving it what critics say is massive market power that has allowed it to snuff out competition. 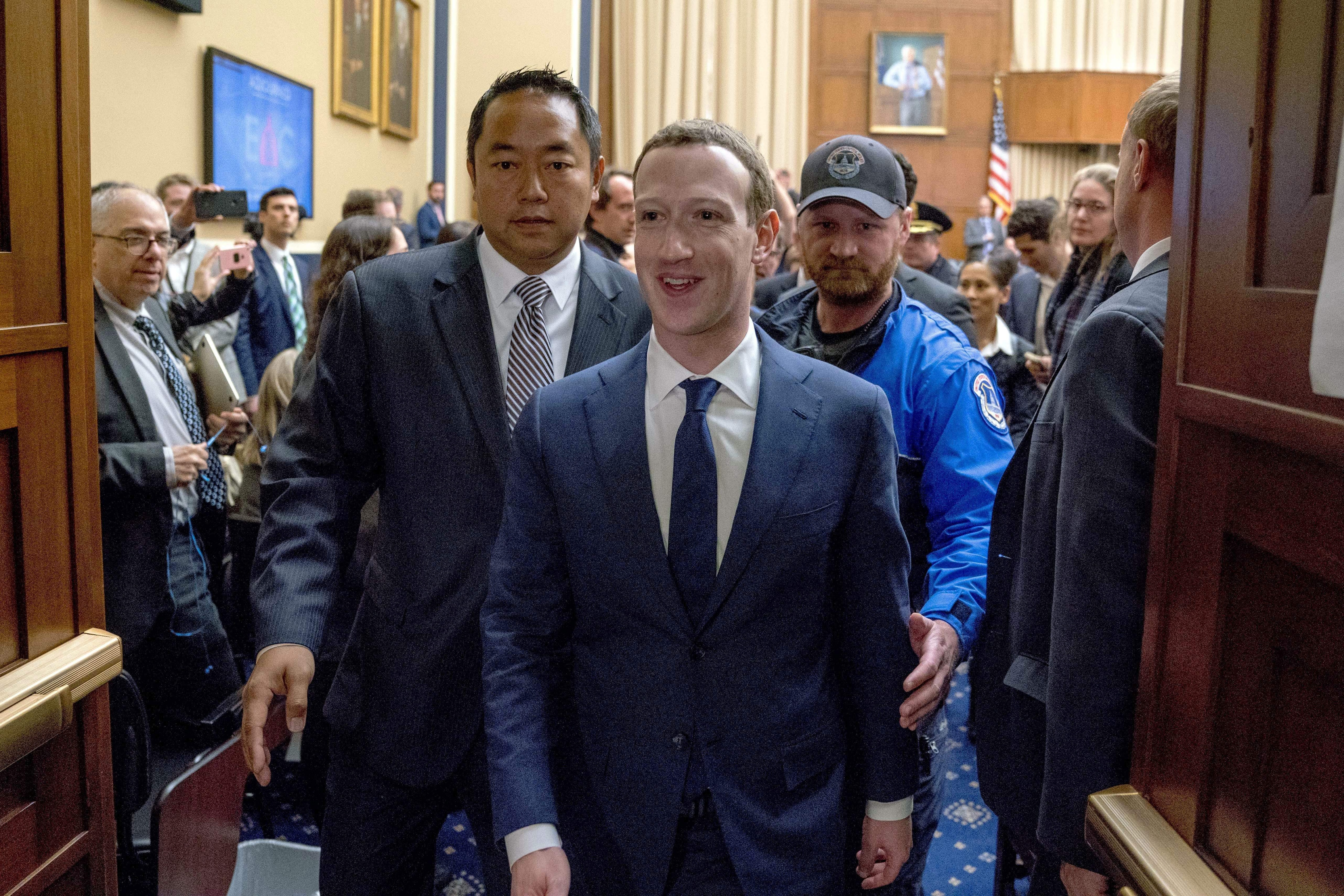 Facebook CEO Mark Zuckerberg smiles as he departs after testifying before a House Energy and Commerce hearing on Capitol Hill in Washington (Pic: PTI)

Zuckerberg's discussion with Hawley touched on industry competition, data privacy legislation, election security and accusations by conservatives that Facebook and other social media giants are biased against right-leaning content.

During his visit, Zuckerberg also met with other senators including Mark Warner, D-Va, vice chairman of the Senate Intelligence Committee, and Mike Lee, R-Utah, a senior member of the Judiciary Committee.

He also declined to answer reporters' questions when he left Lee's office earlier in the afternoon.

Lee's office said the two discussed bias against conservatives on Facebook's platform, regulation of online services, enforcement of antitrust laws in the tech industry and data privacy issues. Congress has been debating a privacy law that could sharply rein in the ability of companies like Facebook, Google, Amazon and Apple to collect and make money off users' personal data.

A national law, which would be the first of its kind in the US, could allow people to see or prohibit the use of their data. Acting preemptively, Zuckerberg last spring called for tighter regulations to protect consumers' data, control harmful online content and ensure election integrity and data portability. The internet "needs new rules," he said.

It was Zuckerberg's first public visit to Washington since he testified before Congress last spring about privacy, election interference and other issues. Zuckerberg met with the US President Donald Trump on Thursday and members of Congress on a political reconnaissance mission to Washington, where he rejected calls to break up the world’s biggest social network.

His visit comes as Facebook faces a myriad of regulatory and legal questions surrounding issues like competition, digital privacy, censorship and transparency in political advertising. Facebook, a social media giant based in Menlo Park, California, with nearly 2.5 billion users, is under heavy scrutiny from lawmakers and regulators following a series of privacy scandals and amid accusations of abuse of its market power to squash competition.

The Justice Department, the Federal Trade Commission and the House Judiciary antitrust subcommittee are all conducting antitrust investigations of the big tech companies, and a bipartisan group of state attorneys general has opened a competition probe specifically of Facebook.

At Facebook's request, Warner helped organise a dinner meeting in Washington on Wednesday night for Zuckerberg and a group of senators. Warner told The Associated Press he wanted Zuckerberg to hear his Senate colleagues' "enormous concerns about privacy and about protecting the integrity of our political system." Their message for the Facebook chief was "self-regulation is not going to be the answer," Warner said. "I think Zuckerberg understood that." Warner and Hawley have proposed legislation that would force the tech giants to tell users what data they're collecting and how much it's worth.

The proposal goes to the heart of Big Tech's hugely profitable business model of commerce in users' personal data. The companies gather vast data on what users read and like, and leverage it to help advertisers target their messages to individuals they want to reach. The tech companies view with particular alarm a separate legislative proposal from Hawley that would require them to prove to regulators that they're not using political bias to filter content.

Failing to secure a bias-free audit from the government would mean a social media platform loses its long-held immunity from legal action.