If a male member is entering the hostel after 9 pm, a bell is rung to alert all the inmates of the hostel. That night no bell rang

The JNU administration seems to have crossed quite a few boundaries by sending male guards to deliver notices to women hostel students in the odd hours of the night. Members of the Election Committee have been receiving notices alleging that the recently concluded elections were not conducted fairly. Strangely, guards are entering the women's hostels as late as 11.30 to deliver these letters.

Priya*, one of the EC members, was not present in her room on September 9 when the first set of notices were sent out to them. Her friend, who was in her room, along with her roommate was shocked to find the guard standing outside their room. It was 11.30 pm. "We had received an email around 7 pm, and yes, they do have to deliver a hard copy as well but at 11.30? Really?" asks Priya. The student told us that usually in the hostel the male staff leave the premises around 9 pm, including the mess staff.

If a male member is entering the hostel after 9 pm, a bell is rung to alert all the inmates of the hostel. That night no bell rang. The students were caught completely off guard. Smita*, another EC member said that she was also not present in her room when the guard came knocking, it was her roommate who called her about it. "I was completely taken aback and asked my roommate not to accept the notice. So the next morning the messenger came and handed it over to me," she said. 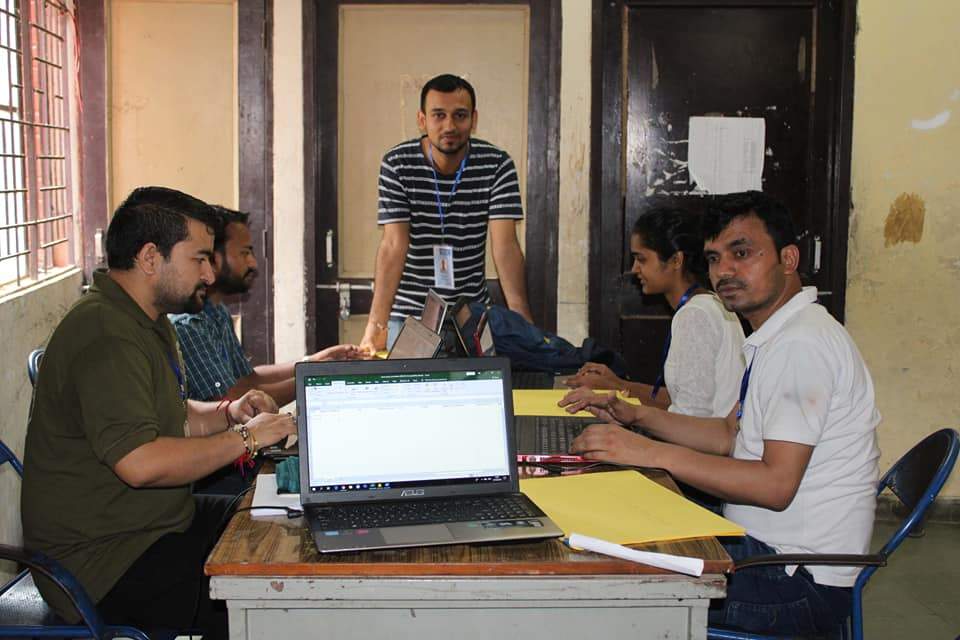 At work: The election committee at work during the JNUSU elections recently

Again on Thursday night, the guards came knocking again with the second notice. "My roommate and I were just lying on our beds, wearing comfortable clothes, in our nighties and sleep clothes. We had also left the doors open because it was very hot. And then the guard just comes and calling out loudly, I was just not in the state to come out at all," Priya said. She then stood behind the door and asked the guard to leave since this wasn't the right time to hand over notices, "He kept insisting that I accept it since I was there but I told him I'm not in a state to come out of my room at all and so he left finally."

Smita was also in her room when the second notice came, again there was no bell. The male guard arrived at her doorstep and insisted that she accept the notice. She was also not wearing appropriate clothes at the point and felt uncomfortable to come out, "I told him to go because I was not in the situation to go out but he refused to go. I also heard that for another EC member the guard pasted the notice on the bathroom door because someone told him that she was having a bath."

However, this isn't just about the EC members themselves, the arrival of the guards at such an ungodly hour also puts other inmates in the hostels in an uncomfortable position. "One of the girls on my corridor even filed a complaint because she was just coming out of the bathroom at that point of time and was shocked to find the guard standing there. She asked that even if the administration wants to summon us at that hour, why should they make all the other girls uncomfortable. She said there was a certain way, a decent way of delivering the letter and this was not it," Priya recounted.

A similar thing happened with Smita, when the guard left, another girl who lives on her floor messaged her to ask if everything was alright. "She thought something was wrong and that's why the guard was there. When I told her it was the notice, she asked me why no bell was rung and how it was okay for them to come to a women's hostel without any warning at such a late hour. She asked me to complain to the warden," Smita said.

Rule breakers: The guards entered the hostel after 9 pm when all the male staff leave the premises

But Smita hasn't complained yet, she says with the amount of harassment she is facing right now, this is the least of her problems currently. "There are so many issued we (EC) are facing right now, so much intimidation and fear-mongering. The guard coming to our rooms so late and knocking is also a humiliating experience for us," Smita said, adding that she would take up the issue as soon as possible. "As if we are criminals to be issued a notice in the middle of the night," Priya adds.

"When we went to submit our replies to the notice, we were waiting there from 3 pm to 5 pm. The Dean was not there, he only arrived at 5 pm and then said it was after hours and refused to accept our replies. Firstly we were there much before closing time and how is it that they suddenly understand after hours but think it's okay to send male guards to a women's hostel in the middle of the night?" Priya questions.

When asked why they think the administration would do something so odd, Priya said that it could be to stress them out further, "It is just to intimidate us, catch us unawares and while in our personal space. That can be quite stressful for a student. Here, we are doing some legal work than living life as a student and doing something like this adds to their pressure," she adds.

The students can't understand why a female guard was not sent and why the notice could not wait till the morning. The students have also spoken to the guards and their chief, but don't blame them for what happened. "They are only following orders, so we don't blame them at all. Anyway, the administration said they would be changing the guards and so they are also under pressure and now they are more upset because they don't want to leave with such a reputation," Priya said. The students have already complained about the midnight notice delivery but have not heard anything back from the administration.