The Delhi University Students' Union election 2019 started at 9.30 am on September 12. Out of the 16 candidates in the fray, there were only four women in contention

The RSS-affiliated Akhil Bharatiya Vidyarthi Parishad (ABVP) won three out of four posts of the Central panel of the Delhi Union Students' Union (DUSU) while the Congress-affiliated National Students' Union of India (NSUI) won one seat on Friday. Akshit Dahiya won the post of the DUSU President, Pradeep Tanwar the Vice President's post, and Shivangi Kherwal the post of Joint Secretary. NSUI's Ashish Lamba won the post of the Secretary in the panel repeating last year's result.

Akshit won with 29,685 votes defeating his NSUI counterpart Chetna Tyagi by over 19,000 votes. Chetna was second with 10,646 votes while AISA and NOTA got 5,886 each. ABVP's Pradeep Tanwar and Shivangi Kharwal won the posts of Vice President and Joint Secretary respectively by a margin of 8,574 and 2,914 votes respectively.

Twitter went abuzz with congratulations for the ABVP long before the results were finally declared at 3.30 pm. The counting for the Delhi University Students' Union (DUSU) polls was supposed to start at 8.30 am but began after almost a two-hour delay as the candidates turned up late, an official said. But students reported that the delay was due to the technical glitches that have been a perennial problem since morning. The screens which show live counting faced technical issues after which candidates demanded that they be made functional. After one screen started functioning, the counting began around 10.30 am. 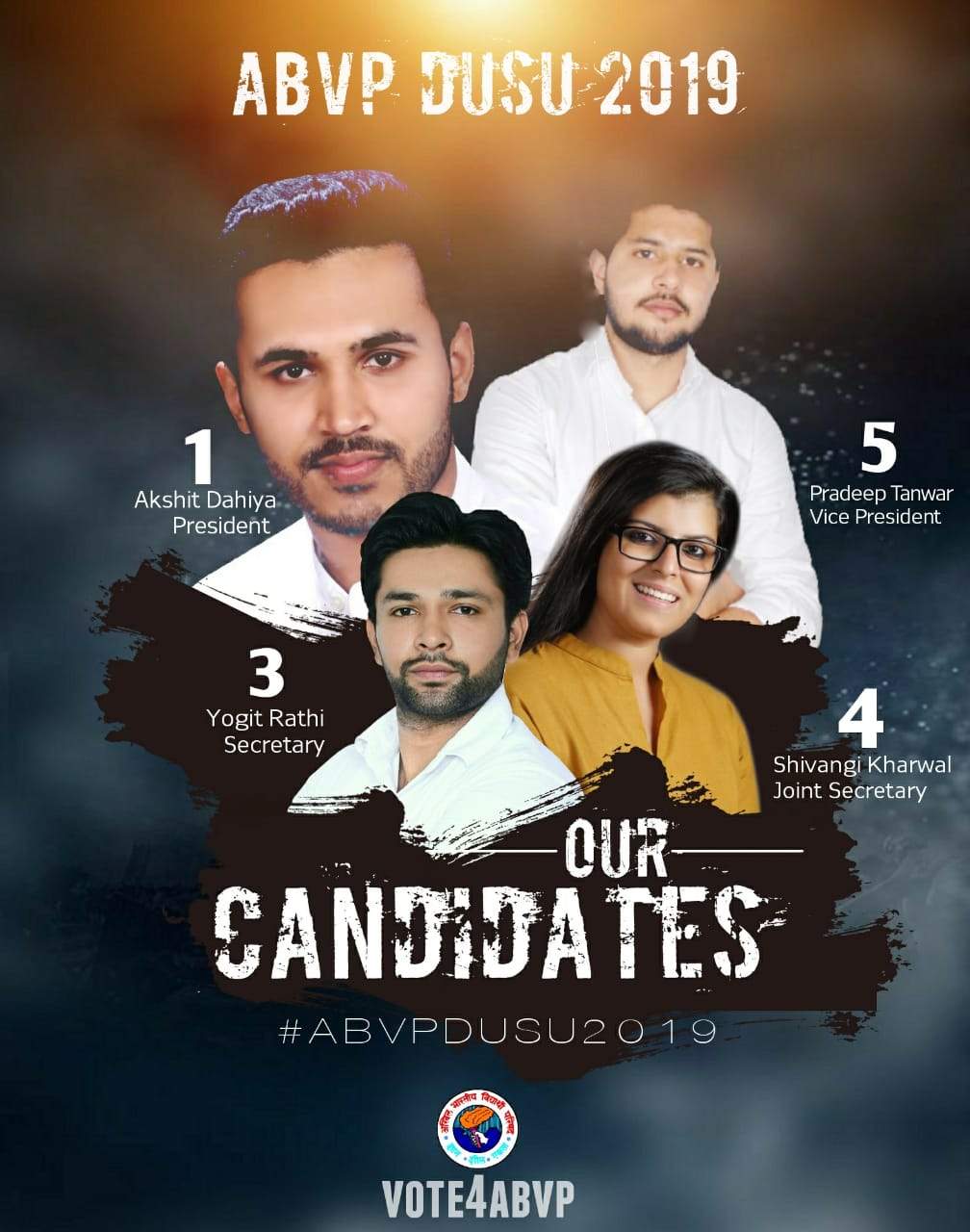 Initially, only one of the EVM's votes were being counted but later after all the screens started functioning, counting on all four of them began. According to the initial trends, after the counting of votes from 45 EVMs, the ABVP was leading in three seats. The Congress-affiliated National Students' Union of India (NSUI) was in the second spot then.

The Delhi University Students' Union election 2019 started at 9.30 am on September 12. Out of the 16 candidates in the fray, there were only four women in contention, while two of them are contesting independently. The National Students Union of India (NSUI) had pitted Chetna Tyagi against Dahiya and while Left-backed AISA's Damini Kain was also in the fray for the post of president. The NSUI fielded Ankit Bharti for the Vice President's post, Ashish Lamba for the Secretary's post and Abhishek Chaprana for the post of Joint Secretary. AISA's Aftab Alam was contesting for the Vice President's post, Vikas Kumar for the Secretary's post and Chetna was contesting for the Joint Secretary's post. Last year, the ABVP had won three posts while the NSUI had won one post.