Politics in motion: Why the nation wants to know who will win the JNUSU elections

The AISA, BAPSA, AISF, SFI, BASO, SIO, ABVP and others will be contesting the elections this year. But there's more to it than any other college election

It is that time of the year again, when campuses across the country resound with slogans, debates and democracy. The center of it all, both literally and figuratively, is the Jawaharlal Nehru University, a space that is synonymous with student politics and is often looked up to by other student unions and groups that are paving their way into politics. With its long and eventful history, the University has birthed, bred and nurtured political leaders and leaders of the community.

Today, the University, in its fiftieth year will be conducting its student elections. Once again. The AISA, BAPSA, AISF, SFI, BASO, SIO, ABVP and others will be contesting the elections this year. In the next two days, we will celebrate the new president and their cabinet and embark on another year of feisty politics. But before that, we thought we'd take you on a little trip down JNU's history and historic lanes. All the way back to its first election in 1971, two years after its establishment. According to Prof Kamal Mitra Chenoy, who retired from JNU this December, the first JNU Students Union was formed even before the JNU campus was set up, "JNU had not yet moved into its present campus, so the elections took place at Sapru House," he recalls. Victory Colours: The passing out cabinet of 2018-2019 celebrating on the day of their victory

The winner of those elections was Gopi Shukla and in the 1972 elections it was VC Koshy. The following year, it was the inimitable Prakash Karat, that same year, Chenoy was heading the AISF, "It was the first time that SFI and AISF formed an alliance. It has formed an alliance numerous times after that, but that was the first time. We backed Karat for President and he won!" he adds. Karat had founded SFI at JNU and went on to lead it for the next few years too, "The SFI was CPIM and the AISF was the CPI, at that time it was the Left versus the Freethinkers. Our slogan that year was — 'People United will Next be Divided," Chenoy tells us. At that time, most of the JNU students had passed out from DU, Chenoy and his other politically active friend, Arun Jaitley, were also among that number.

From then on in, the names just kept getting bigger as the spectre that JNU is continued to grow. In 1973, Anand Kumar became the President, "But he left in three months for a scholarship in the USA and so, Devi Prasad Tripathy took over and then it was Sitaram Yechury who took over the reins and he held on to them for three whole years," said Sohail Hashmi, historian, academic, filmmaker and JNU alumnus. That seems to be the first and the last time something like that happened. In 1995, Chandrashekar was also voted to power twice. 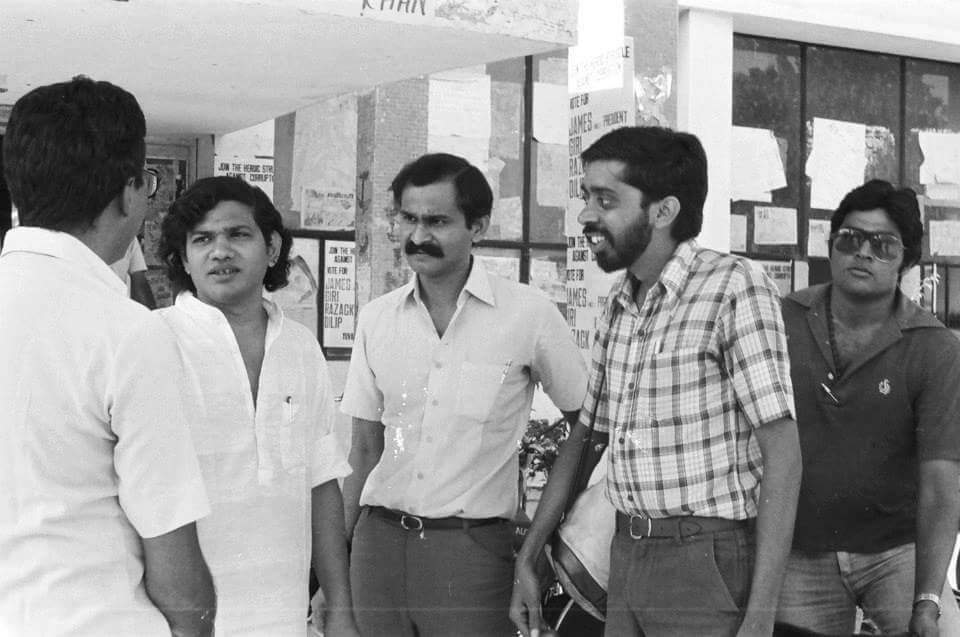 Old Times: Devi Prasad Tripathy and Sitaram Yechury during their time at JNU

And it's not like people have a beef with the rules only today, "That's the weird thing about the Lyngdoh Committee recommendations, I don't understand why they limited a person's presidential term to only a year. For a PG University, where students stay back for MPhil or PhD, it should have also been legal to have a President for two or three years since the students stay back for so many years. Parlimentarians get elected repeatedly, why not students? I don't know why they changed that," Hashmi says. Another interesting part of Yechury's tenure was that one year, there was a no-confidence

It was also during this time that the Indira Gandhi-declared Emergency happened, a dark time for the country and a vibrant time for student politics. "During the Emergency, we were the only student body in all of the country to go underground and continue working. Many of us were also arrested and we spent a few days in jail," he added. Even Chenoy got into trouble during that period, "At that point of time, Maneka Gandhi was studying German at JNU and we got into a lot of trouble with her. I, myself, was told to leave campus but they didn't arrest me as I had some support but they shipped me off to the North East to the Burmese border and I was being watched that whole time," he recalled. 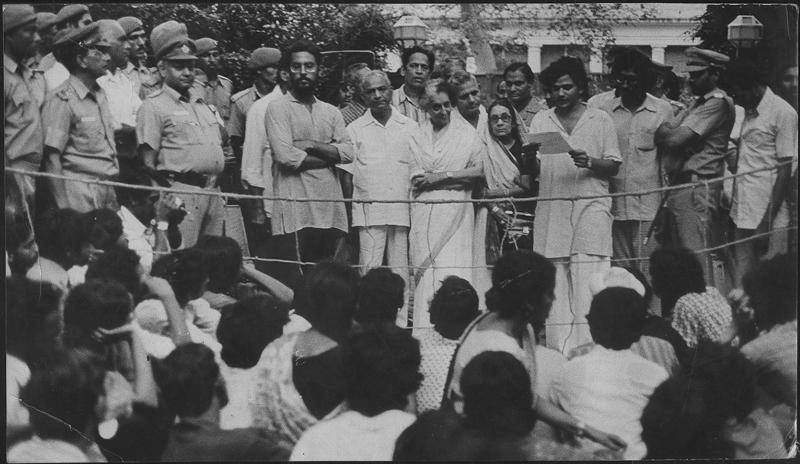 Freedom of Speech: Sitaram Yechury making a speech while PM Indira Gandhi looks on during a student protest

These past few years, the JNUSU and the VC have been at loggerheads — but that wasn't always the case — the last time something similar happened was around 1984, Chenoy recalls. Though the VC was a 'good guy', some students could not see eye to eye with him on a particular issue and a bunch of students apparently locked him in! "We told the students though that it wasn't right," he added.

The next few years, as Chenoy recalled, it became mostly about the Freethinkers, "They did not identify themselves as being part of a political party but acted like one. They were pro-student and fought for their rights and eventually became the bedrock of politics in JNU." The campus soon went on to elect its first woman President, filmmaker Rashmi Doraiswamy and also leaders like Kavitha Krishnan in the 1990's. 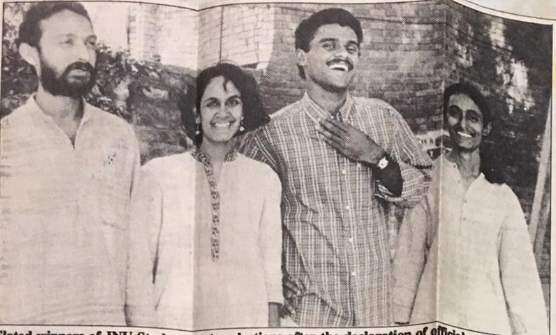 The Archives: A newspaper clipping of President Chandrashekar Azad and the then Joint Secretary, Kavita Krishnan

While the politics have greatly remained left and left of centre, in the last 10-12 years, the right-wing has found a presence on campus, "In the last five years, they have become quite dominant too. But it is relatively new in comparison to the kind of politics that has existed in the campus since the 70's," Hashmi added. The greatest thing about JNUSU, Hashim says is that it is a constitutionally elected body. Even the election committee that conducts the elections is elected democratically.

The politics in the JNU campus has gotten pretty intense, in some ways violent and has had the government intervene. The protests of 2016, when student leaders like Kanhaiya Kumar were arrested will go down in history. But the same enthusiasm and spirit of the 70's has remained, Chenoy feels, "The only thing is that the politics outside the campus is beginning to have an effect on what happens inside.