If you don't support the Left, they accuse you of going Right: Jitendra Sanu, BAPSA's candidate in JNUSU poll

Jitendra or as his friends fondly call him, Jitu, was one of the founding members of the Birsa Ambedkar Phule Students' Association

'For a Fistful of Self Respect'  ⁠—  this is a tagline on one of the campaign posters promoting BAPSA's presidential candidate, Jitendra Suna and it pretty succinctly describes everything the young candidate stands for. Whether it was while growing up in Pourkela in the Kalahandi district of Orissa or as a student in JNU or as a leader at its podium, self-respect seems to have always been a top priority for the research scholar.

Jitendra or as his friends fondly call him, Jitu, is a reserach scholar at the Centre for the Study of Discrimination and Exclusion was one of the founding members of the Birsa Ambedkar Phule Students' Association. The organisation was established at a time when the Left parties were all about uniting working class but did not fancy the idea of getting one of them to lead them from the front. "In fact, when a BAPSA candidate stood for the president's post a few years ago, the Left even campaigned against him," Jitendra tells us.

"Then narrative on campus is that you were either with the Left or with the ABVP. That's how it has always been, if you didn't support the Left then they would accuse you of supporting the ABVP. But they would also never think students from marginalised communities were worthy of standing for leadership posts, SC, ST students never found representation in these parties," Jitendra said. Which was why, BAPSA was born.

For want of a Dalit forum

Jitendra and several other students from the oppressed communities were already working for the United Dalit Students' Front, previously the Bahujan Student's Forum, which existed but was closed down. "We would go for protests and work on student issues but there was a void, especially at the time of elections. People were confused about who to vote for because there was no real representation and the student union was indifferent to us," the candidate recalls. So that is when Jitendra and his friends started BAPSA. 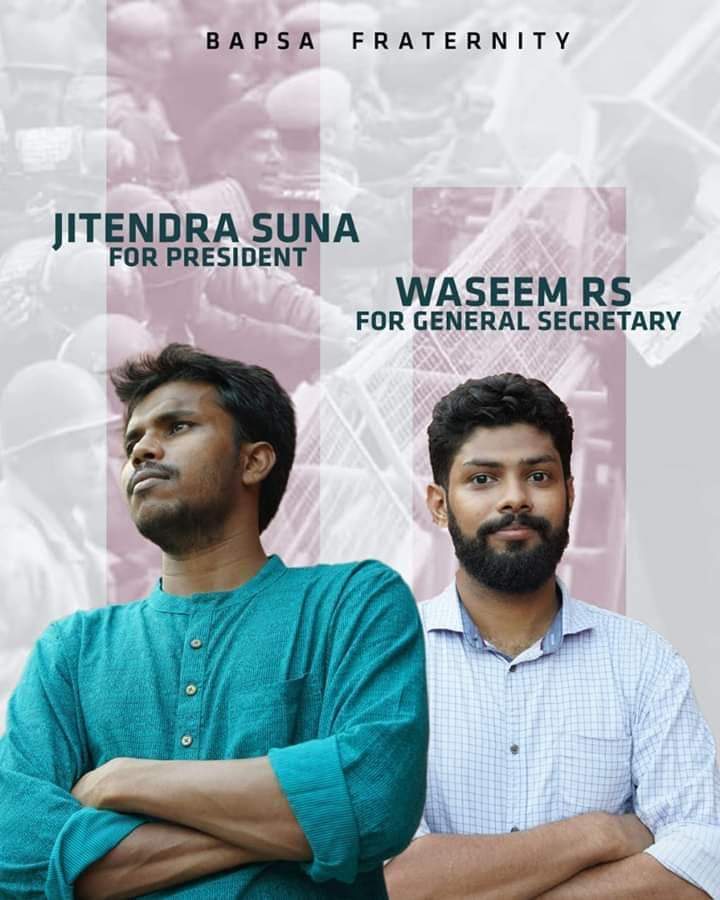 Ever since 2015, BAPSA has organised protests for various causes from education to social issues, "SC, ST students needed a model, an idea of oppressed classes rising up in Indian politics." In the last three years, BAPSA has been actively working towards bringing the issues of the SC, ST students to the forefront, issues that Jitendra himself has faced on campus.

Standing up and being counted

"There are several 'progressive left' faculty on campus who are known for their hypocrisy and they have also been exposed. There have been instances of teachers giving 2,3 marks in interviews for marginalised students. Even the rate of dropouts among SC, ST students is much higher and discrimination on the campus is high," Jitendra said. The candidate goes on to state that even the History Centre which is supposed to be one of the most progressive departments once constituted a committee just to reconsider the reservation policy for professors in the department. "Even the Art and Aesthetics department which is supposed to also be progressive gave SC, ST students 0 marks in their exams," he added.

Of Periyar and Pandits

When Jitendra entered the university, he didn't find the presence of anti-caste icons in history or pedagogy and there was no mention of their greatness in the classes that they sat through, "A History professor once said that all those who fight against caste are casteist themselves. But I knew the history and the struggle of these icons, so I stood up and spoke about how Periyar was part of the Congress party but gave up on it when he realised how casteist and Brahmanical they were."

In another instance, Jitendra said a professor called him out for using the word Babasaheb to refer to Dr BR Ambedkar in his assignment, "I apologised for it and then another student told the professor that he had made a similar mistake by calling Nehru, Pandit Nehru but the professor said it was okay, because it was a term of respect. How is that okay?" he asks. From repeatedly being questioned if he had 'really' written his assignment or if he had 'really' managed to crack the entrance, the list of casteist experiences for Jitendra on campus is endless. It was for these very reasons, that one of Jitendra's close friends Muthukrishnan committed suicide on campus two years ago, "He would always be given less marks and the professors simply did not like being questioned. They all claim to be progressive but the mentality remains the same." 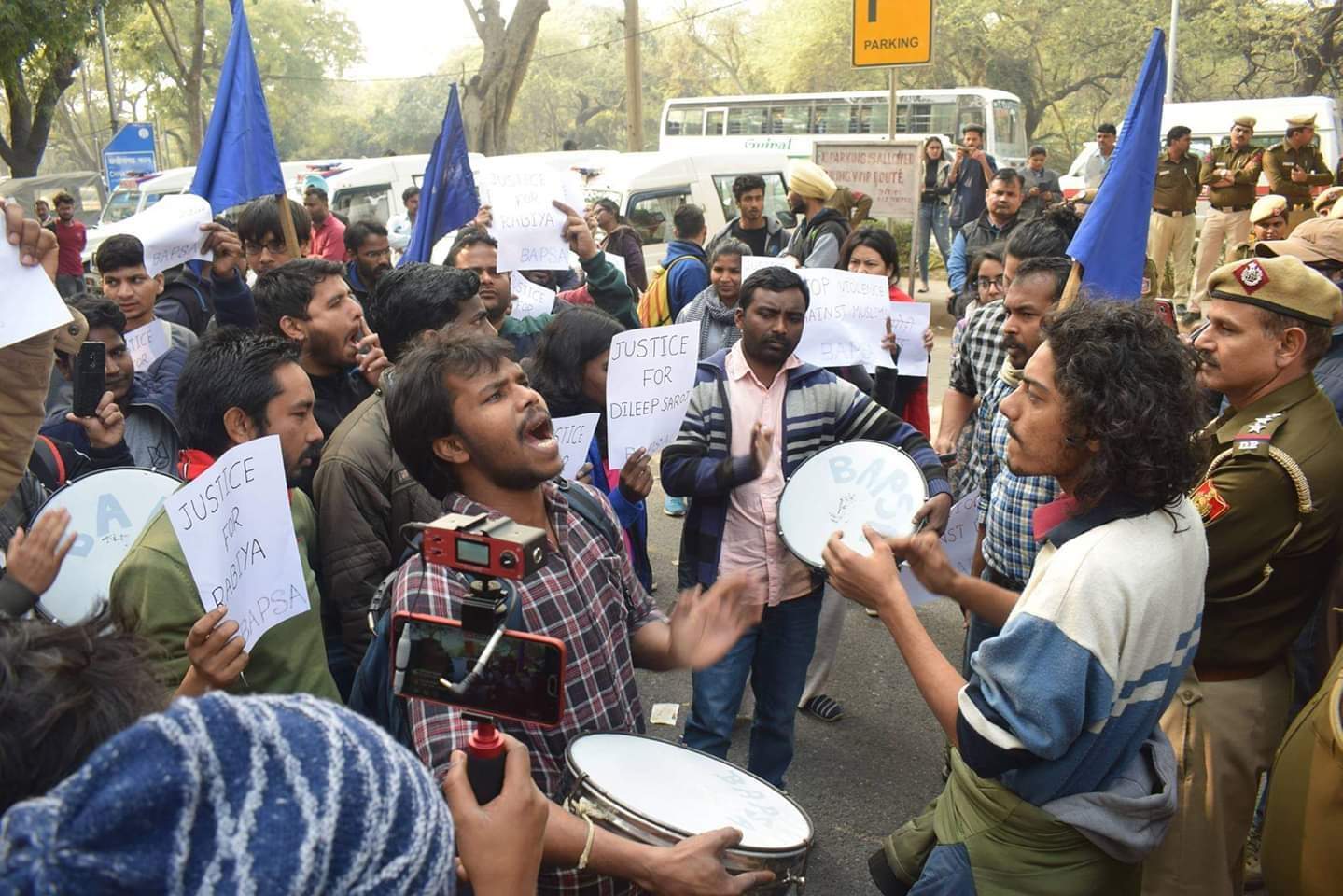 From a farm to a fertile learning ground

Jitendra's own introduction to the world of anti-caste literature and discourse was only in 2012, when he applied to go for UPSC coaching and instead ended up study Ambedkar and Buddhism. "I am the working class, I worked in in the farm, dug roads, worked at a petrol bunk and I'm a first-generation learner. People who call themselves have not even read Marx," he tells us. Now over three years, icons like Ambedkar and Phule have become more mainstream and exist in the books, walls and discourse a lot more, "There has been a sea change, people also appropriate them but now we see and hear about them it more because of BAPSA's work over the last three years."

Even before the candidates are announced, the general assumption about the JNU elections is that it will be a left alliance versus ABVP, but Jitendra is hopeful because of the work that has been done so far and more and more people are supporting him. If he does come to power, Jitendra said it will be his top priority to stop the RSS and BJP from curtailing freedom on campuses, "We will ensure the student movement fights against all anti-student policies and there is more representation for marginalised students not just in JUN but in other campuses as well."

In about a week we will know if Jitendra will be President of the JNUSU but what we already know, is that a leader is born.