The students reached the MHRD eventually after the police tried to divert their buses towards Jantar Mantar. They continued their protest as a delegation met the MHRD

The students of Jawaharlal Nehru University protested at Ambedkar Park located beside the Ministry of Human Resource Development (MHRD) as student representatives from the union met the Higher Education Secretary R Subrahmanyam to discuss their demands. The students asked the MHRD to release the report of the high power committee which suggested that the fee hike be rolled back and that decisions be taken only after consulting the students and concerned stakeholders. They have also demanded that the current Vice-Chancellor be removed from his post. Subrahmanyam told the students that a meeting with the MHRD minister Ramesh Pokhriyal will be arranged soon and that the high power committee report will be released once the President signs it.

The JNU Students' Union President Aishe Ghosh, Vice-President Saket Moon, General Secretary Satish Chandra Yadav and Joint Secretary Md Danish met the MHRD Secretary to discuss their demands while hundreds of students protested at the adjacent Ambedkar Park. "The BJP government is so scared of students that it simply couldn't afford to let us reach Shastri Bhavan for our protest at MHRD. But our spirits will not be sacrificed at your barricades. We will fight every force you have, with our songs, with our slogans, with our books and with smiles on our faces," said BASO member and JNUSU councillor Apeksha Priyadarshini. "The Secretary also asked us to resume classes for now but we told them that we won't move an inch until our demands are met. We urged him to have a discussion with the JNU administration — the VC and the Registrar — as well," she added. 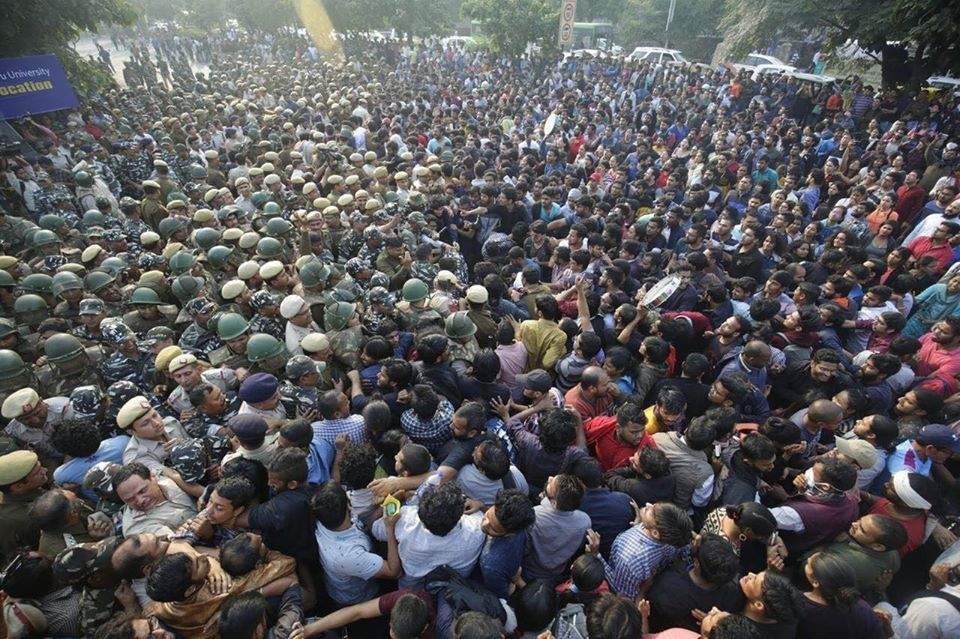 The students have been protesting for 31 days against the sudden fee hike and "undemocratically" passed "patriarchal" hostel manual. The MHRD appointed committee led by former UGC CHairman VS Chauhan recommended that the authorities should consider rolling back the fee hike and include the stakeholders in the discussion process before arriving at a decision.

The students, who were initially supposed to leave from the university in buses at 10 am and reach the ministry for the demonstration, only left campus after 1 pm. "The administration did not let our buses through at first. Then when they did we were escorted by seven to eight police vehicles throughout the way," said Saket Moon, Vice-President, JNU Students' Union. "They then tried to divert the vehicles towards Jantar Mantar but we got off near Rajendra Prasad Road and marched to the ministry," he added. While the students started off from JNU in four buses, only one of them reached the MHRD and the rest of them walked half the way. The park where the protests are on now is also heavily barricaded.